Winners of the Bohemian's 2015 Fiction Contest

The instructions for this year's fiction contest were deliberately vague: write an approximately 450-word ghost story that will scare the pants off us. I expected that entrants would submit stories that were all over the map and filled with ghosts, monsters, crimes and various horrors. And that's what we got. The winning story, "Occupational Hazards," is a ghost story with a dark sense of humor: a "corporeally challenged" apparition meeting with a social worker. We also chose two runners-up: Karen Rasore's story "Haunted," a short and, yes, haunting tale of loss, and Evan St. Andrews' bizarre "Holes." Thanks to all who submitted stories, with an honorable mention to Mandra Drouin. Until next year, enjoy these creepy tales.—Stett Holbrook

"We've received reports that you've been haunting outside of your assigned geographical zone, Mr. Moloch," said Ivan Whiting to the shimmering apparition seated across the desk from him.

The semi-translucent figure folded his arms—which Ivan noted were ropy and muscular and covered in Satanic tattoos—and his eyes seemed to grow bigger and a shade darker, though Ivan knew this was impossible. Slowly, half-smiling, Ivan's client said, "And what are you gonna do about it, bureaucrat?"

Ivan had been reassured by the Division of Spectral Oversight that this population was absolutely safe. All the experimentation—er, voluntary research—had proven that time and again. His job was secure. He had great health benefits. A stellar retirement plan. Ivan swallowed and answered, "Um, well, seeing as this is your first violation, I'm only giving you a warning. But it will be noted on your record."

Had Mr. Moloch's eyes just grown even darker, more sinister? No. Ivan admonished himself for stereotyping his client, and continued: "If you're finding your transition to the afterlife difficult, I could refer you to some fantastic spectral support groups."

Suddenly Mr. Moloch's cool demeanor shifted and he raged, "You want me to go to a goddamn special group for ghosts? You want me to share my feelings"—his voice dripped with contempt—"with a bunch of whiny-ass dead bitches?" 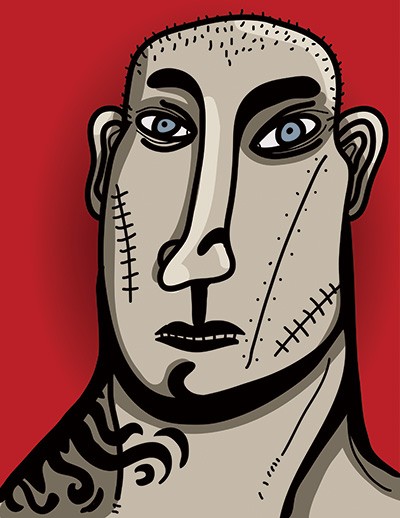 Ivan could feel the sweat begin to form around his temples, and his palms grew slick around his tightly clutched pen. "Um, uh, well we don't use the g-word anymore. We feel it's more appropriate to refer to those of your population as 'corporeally challenged.'"

At this Mr. Moloch began to laugh, a deep and sinister sound that left Ivan with a sensation of leaning precariously over a cliff. Ivan gathered his wits and reminded himself that Mr. Moloch was no different than any other resistant client utilizing defense mechanisms.

"Well, overall I think you're doing just great," said Ivan, shakily closing his notebook. "So unless you have any final questions, that's all for today."

"I do have another question, actually."

So Mr. Moloch had decided to seek his help after all. Ivan straightened his back, smiled weakly and nodded. "Of course, Mr. Moloch, I'm more than happy to answer any questions you might have. And remember, we're in a cone of safety."

Mr. Moloch sat forward, stared at Ivan, and too late Ivan glimpsed the chasm of pure nothingness deep inside Mr. Moloch's eyes. A wicked grin spread across his face.

"Are you outside of my geographical haunting zone, Ivan?" The ghost shot forward and Ivan tipped back in his ergonomically fitted chair and landed on the floor. The office went silent. A few moments later, Ivan rose, stretched and strode from the room.

Later that evening, at the dinner table, Ivan Whiting's wife would comment that his eyes, she could swear, looked just a little darker than they had that morning.