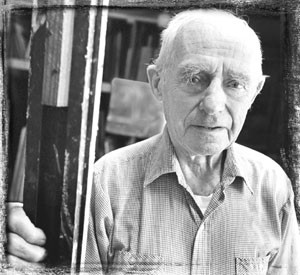 SIXTY YEARS is not too long to be concerned with the taut longing of the vertical line, to trace the stiff meet of a triangle's joints, and to investigate the infinite grace of the circle. And indeed, Healdsburg painter Horst Trave remains distinctly interested. A slight, self-effacing man with a German accent still flavoring his speech, Trave is among the original GI practitioners of that muscular post-WWII explosion known as San Francisco Abstract Expressionism.

With the hard-drinking antics of Jackson Pollock in cinematic vogue, it is perhaps easy to forget the explosive excitement that returning soldiers felt when finally able to make art, not war. Trave, a German native who fled his homeland with the Nazi uprising, made his way to the States in 1941. Once here, he was promptly drafted and sent back to Germany, where he was among the first GIs to enter Berlin after Hitler's fall. Returning to the United States, Trave enrolled in the California School of Fine Arts (now known as the San Francisco Art Institute) and immersed himself in the heady ether of the canvas, an objective realm owing everything to nature but nothing to representation.

But it's a fair bet that Trave's name dings not much recognition in the collective remembrance. Still, Trave, 82, was one of the original bohemians of San Francisco's art explosion, and in 1949 he became a co-founder of the 12-member Metart Galleries, the first "Beat" gallery by the Bay. The artists in the collective each had a one-man show in concordance with their belief that group shows dilute presentation and meaning--their exhibition slots were selected through chance by drawing straws.

"I was pretty much a loner," Trave remembered in a 1996 interview of his life following the Metart experience. "And all of those people at that time, they were involved in sort of a mutual-admiration thing; they backed each other up. I never took part in it; I sort of very quietly did the things that I wanted to do. My attitude to paintings was I did paintings because they were meaningful to me, but society didn't owe me a thing. And because of my morality and upbringing, I also felt that it was important for a painter to make his living in a useful way."

So Trave built houses in the summer and taught art during the school year. He remarried, had children, and retired in 1978. Many of the brightest stars of his youth have been eclipsed by mortality, but Trave paints on, staying fresh and modern and deeply interested in the revealing mysteries of color and line, serenity and jostle. An exhibit of some of his newest work, paintings dating from 1997 to 2001, opens June 7 at the Quicksilver Mine Co. in Sebastopol.

The works collected in the "Recent Paintings" exhibit for the Quicksilver are, as with all of his pieces, titled solely for the day he finished them. "I don't like to get lyrical," Trave says, standing in his studio on a recent late-spring afternoon.

10-3-97 features four triangulated forms that appear to be walking single file. "I see the figures later," he says. "I don't intend them." This one, he admits, now reminds him of "that old German fairy tale 'The Musicians of Bremen.' " Its spare jazz reminds the visitor of Don Quixote. "I've never been interested in anything that's easily identified," says Trave with a smile.

While many abstract painters begin with the easily identifiable human form, bowl of fruit, or landscapes scenes--slowly honing those subjects down to their very structural bones, erasing and discarding in a quest to find essence--Trave started that way. He's almost always been an abstractionist, save for early cartoons and illustrations he did as a young man. "I have a natural tendency to long for tension," he says. "Stroke and counterstroke. There's something like that in music, I believe."

The near-musical tension that Trave achieves on the canvas in his eighth decade dances upon smoky, mute-gray backgrounds, the many layered color of its forms invariably reaching up to the top-right-corner trap of the canvas, a constricted world only they inhabit.

ON THE OTHER hand, a set of vibrant works on paper are quickly built with a palette knife, giving them an exuberant juice that Trave acknowledges is "more direct." But overall, he says, "I'm trying to release something, energies, and the real happening is on the canvas when I'm painting."

While he may not be painting from life, Trave is hugely interested in it. "There's a real reaching toward nature, [which] I'm a part of," he says. "I'm closer to nature than to any religion. . . . The straight line can create factories and machinery that can make life easier for us, but we tend to overdo it and hurt ourselves. I've been longing for my vertical works, but again, they remind me of machinery and the overwhelming of nature.

"It's all so conflicted."

When asked why, after more than 60 years of painting without major recognition, he still goes out to his studio every day to do it all over again, Trave responds thoughtfully.

© 2001 Metro Publishing Inc. MetroActive is affiliated with the Boulevards Network.