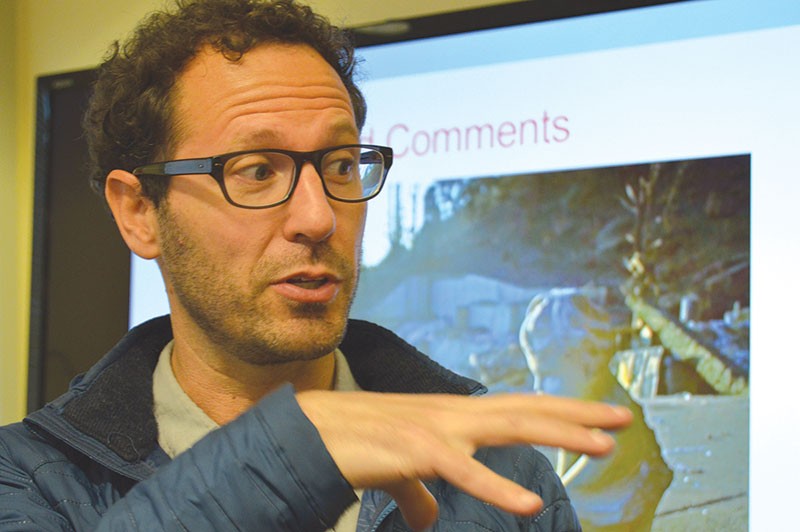 Gregory Simon survived the 1991 Oakland Hills fires and lived to write a book about it.

The University of Colorado professor was in Santa Rosa this week to talk up his Flame and Fortune in the American West during a Monday event sponsored by the Greenbelt Alliance and Sierra Club, and much of the conversation turned on the question of what happens next in Santa Rosa's fire-decimated Fountaingrove neighborhood.

Simon spoke about the generally accepted meme of an "urban-wildlife interface" in the post-fire moment as being an inadequate jump-off point for discussion and action on actually making sure that cities such as Santa Rosa don't burn again. He instead emphasized what he called the "affluence-vulnerability interface," a far trickier policy area to broach.

Enter Fountaingrove, the upscale neighborhood that lost all but 60 of its homes to the October inferno. That area had been burned out once before, in 1964, and was rebuilt.

Simon touched on a highly contentious issue now unfolding in the region over how a rebuilding ought to unfold. The Fountaingrove chain of accountability heads straight to the city planning and development officials who approve "putting homes in places where it's a bad idea," says Simon.

One of the biggest dirty words in town right now is "moratorium," says Teri Shore, regional director of the Greenbelt Alliance, who noted that Santa Rosa officials recently signed off on a new multi-unit housing project in the Fountaingrove area, two months after the fires. City and county officials are now grappling with the intersecting complexities of the rights of property owners and the rights of the rest of the world not to have to subsidize high-risk luxe developments that have a tendency to burn.

The basic civic posture for post-disaster planners and decision-makers, says Simon, is "We knew there was a risk of fire, but we rebuilt anyway." Like Fountaingrove, the Oakland Hills were—and remain—affluent neighborhoods where fire had previously visited.

Simon's main point is to question not how to build in the so-called urban-rural interface, but whether to allow development in those fire-prone areas at all. He suggests calling such areas the "affluence-vulnerability interface."

Such a definition, he said, allows for a deeper understanding of the "underlying social and political complexities that got us here in the first place." An emphasis on the urban-wildlife interface, he says, essentially blows past the political and social processes that gave rise to the risks and vulnerabilities now on full display across the state "as fires increase in size, duration and intensity."

Simon used the metaphor of an arsonist on the loose to drive home the distinction between the term terms: "We wouldn't adapt to the arsonist; we'd try to stop the arsonist."

Absent an outright ban on rebuilding in Fountaingrove or buying people out of their land, neither of which is happening anytime soon, Simon offered suggestions that ran along a matrix of severity for those who would build, or rebuild, in fire-sensitive areas. Santa Rosa could create a tax-assessment scheme so onerous that nobody would want to develop there, he said. Or the city and county could draw on the Australian model which says that homeowners can build in fire-prone areas but are responsible for putting out any fires that break out—and don't come to the government for relief when it burns down.

For its part, the city says new local and state building and fire codes will make new housing better withstand future fires in areas like Fountaingrove. The arrival of gung-ho developers is exactly why Simon says the emphasis should be on process, as he spoke of the Oakland Hills dynamic where developers extracted profits from the area while simultaneously inserting risks into that residential area, in part by repurposing old logging roads into local roads. That was a big mistake, he said. Many who died in the 1991 blaze died in their car along one of the winding roads, stuck with everyone else.

The Oakland Hills saga began with the loggers who deforested the area, which made it attractive to developers; those developers in turn reforested the area with eucalyptus trees to beautify the area, "and at every step of the way people were profiting off of the transition," Simon says.

Then, in 1986, the city of Oakland approved a high-density development, which "would generate lots of property tax revenue" for the city, and many of those houses burned in 1991.

So what is to be done in Fountaingrove? Simon toured the area earlier in the day. The gist of the Monday afternoon talk, held in the conference room at the Sonoma County Land Trust, revealed that the likeliest answer is to be found in the Oakland Hills, which was rebuilt after the 1991 fire.