How Dry I Am

Why the buzz about dry-farmed vineyards? Maybe because their wine tastes better

Note: This is the third in a series on the wine industry's impacts on the environment.

When a property purchase in 1999 subdivided an apple orchard in Sebastopol, the farm's owners, Dan Lehrer and his wife, Joanne Krueger, lost access to what had been their surest water source—a deep and dependable well that had irrigated the land's 20 acres of trees since they were planted in 1973. Though the pair still had two wells onsite, one was reserved for the other half of their business, the Flatland Flower Farm nursery, and the third collapsed in 2003.

"We went from water to no water for our apples in five years," says Lehrer, who sells 25 varieties at local farmers markets. "The trees weren't very happy about the change."

The trees began to wither, leaves browning and branches breaking, as one by one they died of thirst. Yet only a handful perished, and the rest—by what would seem a miracle—pulled through the initial shock and recovered."The trees are still unhappy," Lehrer says. "They look bad, and they're thirsty."

But for eight waterless summers they have produced fruit—fewer apples and smaller than those they once bore, but noticeably crisper, tastier and denser, Lehrer says. They ripen more slowly, and after harvest they last longer in cold storage.

"What we lost in yield we've gained in every other way," he says. "We wound up with a better apple."

Lehrer and Krueger also discovered what the world's farmers knew for millennia but collectively began to forget about four decades ago—that crops can grow in the absence of irrigated water.

For most of the history of agriculture, growers dry-farmed their lands, and they still do in many places. Then, in the 1970s, drip irrigation conquered the world. A farming practice as old as agriculture itself fell to the wayside as wells were drilled, streams tapped, and pipes and hoses were run through thousands of acres of vineyards and orchards.

Water shortages and low summertime stream levels in the North Bay can be largely attributed to agriculture, and the wine industry is the biggest player in that sector. Winegrape acreage has steadily grown for decades, and now constitutes more than 90 percent of Napa and Sonoma counties' cultivated land. Most vineyards are irrigated in the dry months of the year, and use of groundwater to this end is unregulated; any landowner may legally drill a well and pump water without reporting the volume taken—and almost every landowner with grapes on the property does exactly this.

As coho salmon and steelhead struggle to maintain viable populations in dying streams, activists and a small number of farmers are promoting a shift to dry farming. Such advocates are quick to point out that the European Union actually forbids irrigation of many vineyards even in the arid southern belt, ostensibly to assure regional wine quality. In other words, dry farming of grapes works, and irrigation is often unnecessary.

So says Frank Leeds, who has been dry farming grapes for Frog's Leap Winery for almost two decades. Leeds stresses that saving water is not the reason that he farms without irrigation, but merely a positive side effect. "We're doing this foremost for the quality of the wine," he says. "Nothing showcases the terroir of a vineyard like not adding water or synthetic fertilizers or herbicides."

Dry-farmed wines, many sources say, are better. They explain that grapevines, working under stressed conditions, produce smaller grapes than watered vines. The result is a greater quantity of tannin-rich skins and seeds to volume of juice, which can render denser, richer wines.

The trick of a dry farmer is to lock the winter and spring rainfall in the soil for the duration of the dry season. At Frog's Leap, Leeds' approach to doing so is to shred the ground each spring to almost a foot of depth, softening it and sparking an essential spongelike mechanism in the earth, which draws subterranean water upward, against gravity, into the vines' root zone.

As the spring rains peter out in May, Leeds seals the ground with a layer of dust mulch. Throughout the growing season, this top layer is reworked almost weekly, churned into a fluffy cover of insulation. During the scorching heat of July, August and September, water remains in the soil, and the vines—though thirstier than irrigated vines—find all the moisture they need.

At Dehlinger Winery in Sebastopol, a producer of dry-farmed wines since 1975, vineyard manager Martin Hedlund says the benefits are most pronounced in drier years, when a dry-farmed wine tends to show particularly concentrated flavors. But in food crops, also, flavor improves under dry farming.

At Oh! Tommy Boy's organic farm in Valley Ford, Nathan Boone's dry-farmed potato patches are remarkably tastier, thicker skinned and hardier against diseases and pests than irrigated potatoes, according to Boone. At Canvas Ranch in west Petaluma, where Deborah Walton and her husband Tim Schaible, grow six acres of vegetables, their tomatoes show "an incredible difference in flavor." 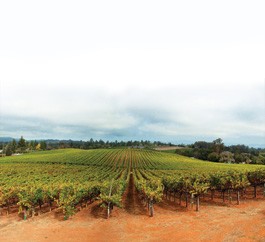 David Little, owner and operator of the Little Organic Farm, also swears by the enhanced flavors of dry-farmed fruits. Ten years ago, his first crop of dry-farmed tomatoes nearly didn't make it. The vines struggled, their leaves curling and wilting, but as death seemed imminent, the plants bounced into production.

Like Leeds, Little acknowledges the rigorous labors of dry-farming and calls it "an art of working the soil." Not all are game for the job, and Little says some farmers have attempted to cash in for free.

"'Dry-farmed' is such a buzz word now, and we have some people cheating, giving their tomatoes water and saying they're dry-farmed," he says. Some growers water their tomatoes just until the plants establish their roots, he says, while others irrigate until the vines flower. "But true dry farming is no water at all."

When water fails to arrive from above, plants simply go searching below, and over the years, dry-farmed perennials—like grapevines—can develop tremendous root systems, deep, wide and several times more massive than those of their watered peers. It was at Kunde Winery that land managers digging into a grotto to excavate their wine cave reportedly encountered grapevine roots dangling from the ceiling, 50 feet below the dry-farmed hillside above.

And at Bucklin Old Hill Ranch in Glen Ellen, old vines dry-farmed all their lives have been excavated after dying of old age and found with root systems 30 feet deep and 30 wide. Such size means strength and vigor, and during the phylloxera outbreak in the 1980s, when many vineyards succumbed to this root-infesting insect, dry-farmed vines, according to witnesses, survived when nearby watered vines did not.

On the Bucklin property, side-by-side plantings of watered vines and dry-farmed vines have matured into a vivid demonstration of how dry farming can strengthen a plant, according to the land's owner and winemaker Will Bucklin. When temperatures spiked drastically last July, for instance, his dry-farmed old vines, which are 130 years old, simply "shut off," Bucklin says, their leaves "drooping like tissue paper in the wind," while his watered vines attempted to work through the heat, which held at 115 degrees for two days. The effects of the heat wave hit weeks later, when the watered vines dropped 30 percent of their grape clusters to the ground. The dry-farmed vines, however, resumed business as usual and produced average yields.

Convinced of the virtues of dry-farming, Bucklin is transitioning his younger vines off their irrigation, but whether the wine industry will ever do the same may be unlikely. Forty years of reliance on irrigation has instilled in people "an indoctrination that irrigation is a necessary part of farming," when it's not, Bucklin says.

But Nick Frey disagrees. Frey is president of the Sonoma County Winegrape Commission, and he says dry-farmed grapevines produce on average such low yields that many or most North Bay wineries would fold if they were to cut off their irrigation. Vineyards on hillsides or in areas of loose, gravelly soil would be especially vulnerable to unpredictable crops and profit loss, Frey says, and an annual production of four tons per acre could crash to one and a half.

"We wouldn't be able to support 60,000 acres of grapes without drip irrigation," he says. "If you're a winery trying to manage your product supply, you need drip irrigation."

Frey believes the North Bay's natural water supply is sufficient—just poorly managed. Regulations, he says, forbid many farmers from diverting wintertime floodwaters, creating storage ponds and utilizing a seasonal overabundance of a resource. Thus, when summer comes, these same grapegrowers may have no choice but to draw water from their wells. This removal of the earth's groundwater can directly affect nearby streams, which may "sink" into the ground—i.e., "dry up"—as they are drained from below. In some cases, creeks that flood each winter also run dry each summer.

Stu Smith, however, believes many of Napa County's vineyards could be weaned off their water. He has advocated for a shift for a decade but with little positive response, he says. As a board member of the Farm Bureau from 1999 to 2001, Smith spoke periodically with his colleagues about pushing a dry-farming conversion campaign. "But it just fell on deaf ears," he recalls.

Smith also took a seat on the Napa River Watershed Task Force in 1998 and the Napa County general plan update's steering committee in 2003, appointed to each post by the board of supervisors. In these positions of political leverage, Smith says he advocated for dry farming as a water conservation measure. There was, he says, "no interest."

Legal restrictions on groundwater use remain lenient, at best, though some local governments have taken steps with state-level assistance to curb unmonitored withdrawals. Should that patrolling finally be enacted in California—the only state in which groundwater use remains virtually unregulated and unrestricted, according to the Natural Resources Defense Council—Hedlund at Dehlinger Winery believes it will force a widespread conversion to dry farming if it results in groundwater use fees.

"Water could get extremely expensive," he says. "And if it's too expensive to water your lawn, what do you do? You turn off the water."