'Ex Machina' examines the line between human and machine 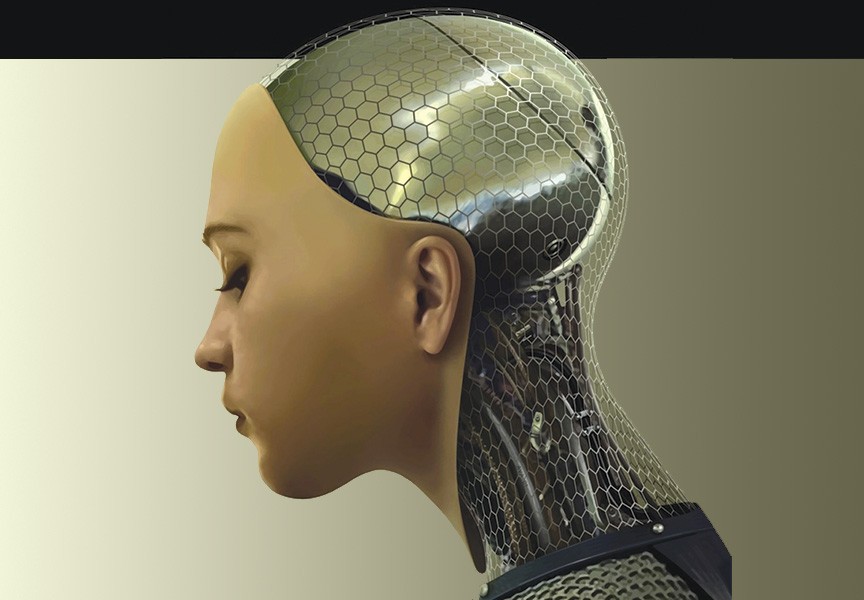 The Latin phrase deus ex machina describes a theatrical device in which an actor in the role of a god appears onstage to neatly wrap things up. Alex Garland's science-fiction film Ex Machina—a masterpiece if ever I've seen one—seemingly clips the god from the equation in depicting a bad demiurge in the form of a high-tech tycoon.

Nathan (Oscar Isaac) is the founder of Bluebook, named in honor of Wittgenstein's privately circulated journals on human consciousness. This search engine, with its 94 percent market share, has left Google, Baidu and all the rest in the dust.

Nathan lives in what seems like a recycled, eco-friendly boxcar built over a mountain stream. This cyber-lord is attractively brutish, muscled and bearded with a close-cropped head. He has the patronizing assumption of homo-superior status on the simple grounds that he knows how to click a keyboard the right way. And he has that greedy paranoia barely masked as coolness.

Far away from the world, Nathan is hiding his insanely great development: artificial intelligence in a human frame. The intelligence is called Ava (Alicia Vikander), and she is as beautiful as she is strange. She's the most chilling nonhuman I've seen since video artist Elizabeth King's creation in the 1991 clip "What Happened." Ava is like that toy model in biology class, the Visible Woman, come to life; she has glass limbs, and you can just hear the soft soughing of rotors as she moves. Vikander was a ballerina once, and her movements have just enough stiffness to be unnatural. Mutely, she beseeches for freedom.

I've read the counter critiques—one critic called this story misogynist, but that misses the point: Ava isn't a woman. We know why Frankenstein's monster rampages: he's alone and hurt and badly treated. Ex Machina hits you: Is there a right way to treat such a creature? Would kindness even matter?