'Icing on the Cake' 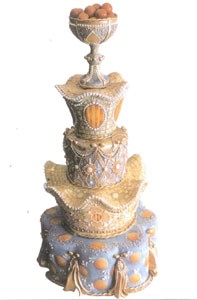 Cakes are thought of as frivolous, but that's what makes them so special. It's why cakes are used to mark events like birthdays and baby showers--days when frivolities can be freely indulged--and weddings, the most frivolous of all days, when a couple will stand to ceremoniously cut into the biggest, grandest, and most expensive cake of their lifetimes.

There are a lot of social implications with cake, too: body image, nutrition, gender roles. Those wishing to explore these issues should proceed to COPIA and walk upstairs to view their current exhibit, "Sweet Tooth." Those who wish to see cakes--elaborate, sculptural cakes that defy gravity, form, and, occasionally, good taste--need only to stay on first floor where the straightforward "Icing on the Cake" showcases amazing creations by six of America's most cutting-edge cake artists.

That's a less common juxtaposition of words --cake and art; usually we say "cake decorating," not "cake artistry." But as chefs are increasingly gaining stardom for their culinary output, pastry chefs are garnering attention for creations that dazzle the eye and break conventions of symmetry, color, and design. In Wedding Rings, for example, Colette Peters of Colette's Cakes in New York City crafts a leaning tower of jewel-toned, lopsided cake layers that resembles a posh but sloppy stack of hatboxes, with a whimsy more Looney Tunes than Martha Stewart Living.

Jan Kish of Le Petite Fleur in Columbus, Ohio, takes tromp l'oeil to the furthest extent in The Ultimate Cheesecake, an impossibly uncakelike work that's not just one cake but a display of many cakes replicating the elements of a French cheese counter--wheels of Camembert, stacks of Pont L'Eveque, and baskets of "fresh" fruits.

The one question that begs to be answered when witnessing these marvels of sweetness is, Why? Why spend tedious hours molding marzipan and brushing sugar-paste surfaces with opalescent powder to make cake look exactly like cheese when cake can look like . . . cake? The answer: because you can.

"When I see something beautiful, I want to eat it," writes sugar artist Margaret Braun in her lavish book Cakewalk, a volume as filled with sketches and architectural details--photos of tiles, linoleum, and elaborate brickwork--as it is with images of cake. Braun's Chalice Cake achieves spindly flourishes, intricate surface textures, and an undulating Rococo structure that is, on the surface, too beautiful to eat.

The lure of creating a thing that's opulent, fantastical, and yet edible is what drives cake artists to slave over a glorified pile of sugar, only to have it carved into and devoured days later. It's the grace of ephemeral beauty.

There are, of course, deep roots to all of this, most readily found in the work of Antonin Carême, perhaps one of the most influential figures in French culinary history. Carême, active in the late 18th and early 19th centuries, was a draftsman as well as a chef, and he spent hours engineering elaborate displays of surrealistically colored and shaped food arranged into pyramids and towers.

Of course, looks are not everything. "Sometimes with edible art, the focal point is so much on the exterior that the inside is forgotten. It really has to taste even better than it looks," says Sam Godfrey of Perfect Endings in Napa and San Francisco. "Cake and food is such that you can really manipulate it into Mt. Rushmore, but it often tastes like Mt. Rushmore." Part of "Icing on the Cake," Godfrey's Grand Piano Cake replicates the instrument--right down to the edible sheet music printed with edible ink--in incredible detail.

"We will go to the extremes with design only if the inside is going to exceed the outside. [T]he only purpose for me to do cakes that look like a grand piano is [if] the culinary aspect is as celebrated as the visual and the artistic," Godfrey says. The piano cake was created for the wedding of producer and songwriter Walter Afanasieff, whose bride wanted to surprise him with a groom's cake. "So we did a piano. I'd never done a piano, wasn't sure if I could do a piano, but as so often is the case, I opened my big mouth, and then talent and skill have to catch up.

"It was really the hit of the wedding," Godfrey continues. "No one could believe that it was actually edible, and people were really more pleased to find out that it actually tasted delicious. . . . You're paying for this big wedding cake and this groom's cake, and they should be imminently edible and not technically edible, because what's technically edible is not always palatable."

Does this mean that art cakes are not, well, yummy? Not necessarily, says Godfrey, but it can. "What has happened is a lot of people have come to cake decorating from other mediums of art. They were a sculptor or a painter and then decided 'I want to make cakes,' and have carved out a niche for themselves in the cake world. Which is wonderful, because I think some of the most talented people come from that. [But] it's a separate talent to create something that's amazingly visual, and then for people who have a background in baking to bake something that's just as exquisite inside."

The pliable qualities of products like pastillage, fondant, gum paste, and marzipan can allow cake artists to reproduce textures in intimate detail. Sugar paste creates a blank canvas for a cake artist to apply detail work that goes beyond more commonplace piped scalloped edges. Godfrey points out that this can be tricky, though. "Fondant, I have to say, is the great excuse, because it's much easier to work with than it is with butter cream. Fondant is like Play-Doh--it doesn't take a great deal of skill to cover a cake with fondant and do all of these drapes."

Fondant also tastes like chewing gum that's been left on a bedpost for a decade; it's not really meant to be eaten, a characteristic that makes it, from a dining standpoint, an odd thing to put on a cake. "The majority of our cakes are done in butter cream," Godfrey says. "It tastes better, and it's less expensive. I'm not going to do every single cake carved and manipulated, because at then end of the day, you want to eat it."

Well, not everyone. Mike's Amazing Cakes in Redmond, Wash., once made a cake in the likeness of a CEO for a surprise party, and the CEO was so pleased with the cake that he insisted on taking it home uncut to store in his freezer and show it off to visitors.

Mike McCarey, the owner of Mike's Amazing Cakes, organized the "Icing on the Cake" exhibit. His own contribution to the exhibit is Frog Prince, a cake whose balancing act is so baffling that it seems McCarey bent a few laws of physics to pull it off. A very regal Renaissance-costumed frog, who looks more like a stop-motion model than a cake, sits atop a palace, supporting in his extended arm a rotunda structure. It's as if a princess kissed the cake and a frog popped out.

Possibly, some of the cakes in "Icing on the Cake" found their origin in the artists' desire to see if a concept could be executed in the first place. At COPIA, as Margaret Braun dabbed color onto a stately cake-in-process for a demo in the museum's lobby, a circle of curious visitors quickly gathered around to witness the cake's evolution from a mound of pale sugar paste into a lustrous, sculpted Baroque fantasy.

That's what people love about cakes--the fantasy and the magic of transformation. Pressed duck or Dover sole boned tableside may pack a lot of punch as far as culinary spectacle goes, but there's no fairy-tale element to meat and vegetables. Through the sweetness and light of cake, all things are possible. But just watch it on the fondant there guys, huh?