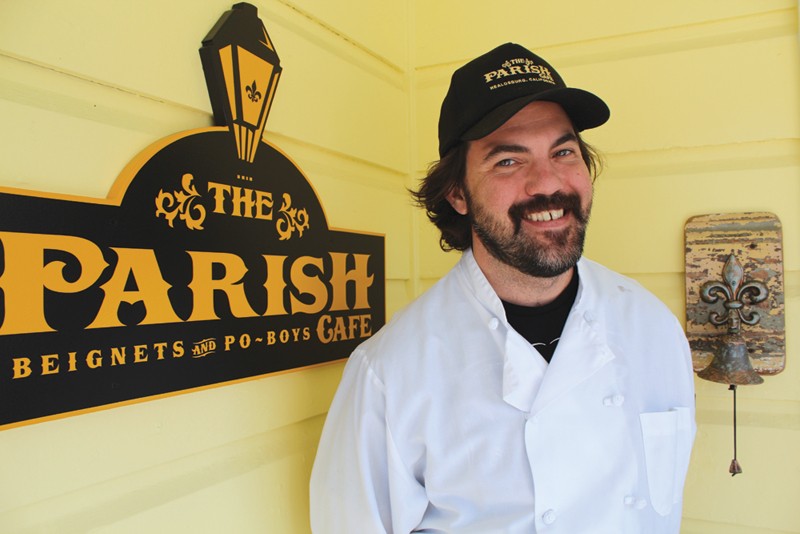 In a gruff, slightly drawled voice, New Orleans transplant Rob Lippincott describes the food at his Healdsburg restaurant, the Parish Cafe. "These dishes haven't changed in over a hundred years, and I don't want them to," he says on a sunny afternoon on the veranda of the converted 1860s home. "You can put your Californication on everything, but don't do it to my food."

What started as a bustling beignet business at the Santa Rosa and Windsor farmers markets four years ago blossomed into a full-blown Naw'lins po'boy shop late last year. While delicious, the place is decidedly NSFD (not safe for diets). "Look, it's fried," says Lippincott of the sandwiches so close to his heart. "But ain't nothing wrong with that. It's a beautiful way to cook."

Before the po'boys start flowing at 11:30am, breakfast at Parish Cafe is positively decadent. If it doesn't stick to your ribs, it's not coming out of the kitchen. Pain perdu ($9), French toast with toasted bananas and pecans in a bourbon sauce, constitutes a wonderfully sneaky way to have dessert for breakfast. The crawfish and andouille omelette ($11) boasts color and texture so perfect it looks Photoshopped.

The po'boys are the main squeeze, though. Served on Healdsburg's own Costeaux bread, these monsters come in eight- and 12-inch sizes, the larger often split for two people. Rookies can start with the ham and cheese or turkey ($8–$11), but serious eaters should try the fried seafood sandwiches with shrimp, oyster or catfish.

The best is the half and half, with oyster and shrimp ($12–$16). A fresh ocean taste permeates the fried goodness and mayonnaise, satisfying those naughty inner cravings while staying unbelievably light and crunchy. One hand holds the sandwich, the other holds the uncapped Honkey Donkey, a hot sauce to be liberally applied before each bite.

As if the regular menu isn't tempting enough, Lippincott gives a peek into the restaurant's secret menu. Deep fried pickles, mushrooms or green tomatoes? Just ask. The aforementioned half-and-half po'boy covered with debris gravy (trimmings from roast beef simmered for hours into gravy) can be had by whispering "the Peacemaker." And Lippincott's favorite off-menu item is the Frankenstein: fried catfish, oyster and shrimp covered in debris gravy. It comes with two burly guys to carry you out to your car after the food coma sets in (unnecessary disclaimer: it actually doesn't).

Future plans include outdoor entertainment on a gaslamp-lit patio, and in May, a return to Santa Rosa and Windsor farmers markets selling those famous beignets (which are also available in the restaurant).

"Healdsburg, as hot as a food spot as it is, it's all geared toward the tourists, nobody's thinking about the locals," says Lippincott. "I want somethin' else. I want a po'boy."