Jay DeFeo, one of the 20th century's great painters, is memorialized in two exhibits 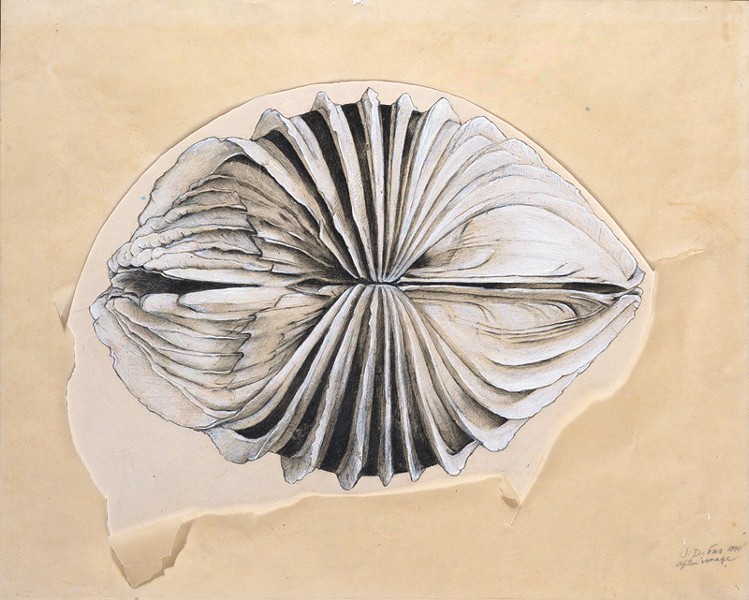 It was the late 1970s at Sonoma State University, and Jay DeFeo was not doing particularly well.

"She was struggling to survive," says Sebastopol artist Susan Moulton, then the department head at SSU. "She didn't make a lot of money. And at that time, she wasn't selling a lot."

Finances were one issue, but something else plagued the famed artist at the time: toxins. In creating her subsuming masterwork The Rose, DeFeo had ingested substantial amounts of white lead, resulting in a loss of teeth and hair. At SSU, she got her first cancer scare—not that it hindered her. "She started eating really well and jogging every day at noon, and taking real control of her life," says Moulton. "I saw her at Mills College right before she died, and she had just climbed Mt. Kilimanjaro."

DeFeo's few years teaching at SSU, alongside Moulton, William Morehouse and others, are but a brief brushstroke in DeFeo's life, which was extinguished by cancer in 1989. But the artist's biography has taken on a life of its own, sometimes bolstering, other times hampering critical appraisal of her achievements. A new retrospective at SFMOMA brings together for the first time significant examples of her work and makes a powerful case for elevating her to the top ranks of post–World War II American artists; a concurrent exhibit at di Rosa, titled "Renaissance on Fillmore, 1955–65," gives historical context from the apartment building that served as an incubator for DeFeo's work.

Starting in the late 1940s, DeFeo established herself as part of the Bay Area abstract expressionism movement. At SFMOMA, early pieces, like Untitled (Florence), 1952, feature dynamic passages of bold colors anchored by simple geometric gestures. Later, she shifted to a monochromatic palette. The large canvas Untitled (Everest), 1955, builds from a smooth gray bottom section into a flurry of blacks and whites applied vigorously in overlapping waves like roiling clouds announcing a storm.

More controlled but just as action-filled is Origin, 1956, a tightly bunched series of narrow vertical strokes of black and gray—the painting is poised between a upward thrusts, like jets in a fountain, and a downward crashing, like a great falls pouring over a rock rim. Her work echoes and equals that of several major figures from the period: early Diebenkorn, Hassel Smith, Clyfford Still and Frank Lobdell.

The exhibit also shows DeFeo's forays into other media. She fashioned oddly crude wood and plaster sculptures of crosses and primitive totemic creatures (which influenced Manuel Neri). She made meticulous charcoal drawings in which fine waving and spiraling lines course through blank space. She experimented with collages of found images in the manner of fellow San Franciscan Jess.

In the late '50s, DeFeo embarked on a series of large paintings distinguished by the dense application, with a palette knife, of oil paints. These works take on a 3-D aspect, as much sculpture as painting. In The Jewel, 1952, a vertical starburst pattern of heavily caked paint converges across a spectrum of dark reds to a dazzling white center. Along the vertical axis, the paint has been cracked open to reveal deep fissures, as if bones has been pulverized to get at the marrow.

These major works are mere preludes, however, to the piece that came to dominate DeFeo's life, The Rose. Beginning in 1958, DeFeo devoted herself almost exclusively to the creation of this immense painting. It took over her apartment on Fillmore Street that she shared with her artist husband, Wally Hedrick.

Taking up again the starburst pattern of The Jewel, she made it rounder. From a concave center point (located at just about eye level), the incised rays jet outward, growing thicker and more clotted until they disintegrate into blobs of gray and black. Carefully positioned in a special alcove at the museum, The Rose is a riveting, transcendent work, a grand vision of creation or universal flux. Photographs don't do it justice; the scale and physicality have to be seen in person.