Chilly Scenes: A mail-order bride comes to the snowy reaches of Montreal in 'A Silent Love.'

Every year since its debut at the Lark Theater in the fall of 1997, the San Francisco Bay Area's International Latino Film Festival has grown measurably larger. This fact will no doubt seem run-of-the-mill to certain jaundiced film-festival observers, who will surely point out that film festivals are expected to grow, expected to increase the number of films they show from year to year and should probably add to the number of calendar days they runs, at least in the first several years, until, like the celebrated Sundance Film Festival or Cannes, such things as the festival's length and number of films shown are more or less set in stone.

What is remarkable about the Latino Film Festival is that its growth, while certainly hitting all the expected marks, has also been noticeably geographical.

Now launching its eighth annual celebration of Latino film and culture, the festival screens 80 films from 14 different countries, exhibiting in 13 venues across seven cities, from San Jose to Healdsburg, including screenings at the Castro Theatre, the Palace Legion of Honor, La Peña Cultural Center and numerous North Bay venues. The festival opens on Nov. 5 and bounces up and across the Bay Area, back and forth, ultimately concluding back in San Rafael on Nov. 21.

This, by anyone's measure, is one huge film festival.

The Latino Film Festival is usually as ambitious in its artistic scope as it is massive in its MapQuest distance estimates. It was created by festival director Sylvia Perel to provide Bay Area residents with an opportunity to view what she feels are the finest, most innovative, thought-provoking and little-seen gems made by maverick filmmakers throughout Latin America and Spain--including those by Latinos in the United States. This year's lineup is no exception.

North Bay screenings are scheduled for the Lark and Raven theaters, Dominican College, Smith Rafael Film Center and the Pickleweed Community Center. The slate at the Lark includes an assortment of films of particular note that Perels has subtitled "The Jewish Experience in the Hispanic World." These begin with Mexican director Marcela Arteaga's historical dream-poem Remembrance (Nov. 14), which tells the story of Luis Frank, a Lithuanian Jew who grew up in New York, fought in the Spanish Civil War, was captured by the Nazis while fighting in France, survived Auschwitz and later made his home in Mexico, where he spent the rest of his life.

The film is built of memories, the flotsam and jetsam of one remarkable, restless man's incredible life story. Beneath the surface, it's a testament to creating a sense of home and country in the midst of cultural rootlessness.

Topically related is El Abrazo Partido (Lost Embrace), which captured the 2004 Silver Bear Award when it played the Berlin Film Festival, and is now having its West Coast premiere on Nov. 20. The film, directed by Daniel Burman, is a sensitive exploration of personal cultural conflict, as the Argentina-born grandson of Polish holocaust survivors finds himself having to choose between a life in the rocky economy of Argentina, where his family relocated after the war, and a new life in Poland, the land his grandparents left behind and the home of his ancestors. A klezmer-soaked food and wine reception titled "To Life! ¡Fiesta Judía!" follows. 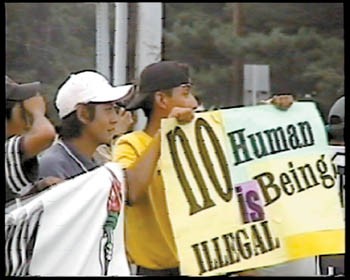 Also at the Lark is director Juan Carlos Desanzo's Eva Perón--The True Story (Nov. 12), a lavish biopic about the beloved Argentine actress turned first lady, arguably among the most powerful women in Latin American history. No one sings in this version, but the movie was shot in locations where the actual events occurred, which ought to attract plenty of local Eva-philes.

The film follows Eva (Esther Goris) from her youth and young adulthood as an actress in Buenos Aires through her marriage to President Juan Peron, her run for the vice presidency and her death from cancer at the age of 33. A "Noche de Tango" party with live music and tango dancing, food, winetasting and a silent auction follows Eva at the Gallery Bergelli just down the street.

From its title, A Silent Love (Nov. 13), one wouldn't guess that Argentine director Federico Hidalgo has created a delightful, funny, bilingual romantic comedy. A Silent Love follows the ups and downs of a mail-order marriage between a mild-mannered, middle-aged Canadian professor and a young Mexican knockout with impulse-control issues--and a mother who comes along with the marriage.

Having relocated his new wife and mother-in-law from Mexico to Montreal, the professor finds that the age difference between him and his bride is an even larger obstacle than the cultural and language issues, and before long he finds himself connecting with his mother-in-law, who, after all, is more his type. A popular ticket at the recent Sundance, this is a love triangle movie with a lot of spice.

For two days, a week apart, the festival moves to the beautiful grounds of Dominican University, where the cinematic highlights include KordaVision (Nov. 11) and Farmingville (Nov. 17). KordaVision, by Cuban filmmaker Hector Cruz Sandoval, is an artfully conceived documentary featuring the photographic work of Alberto Díaz Korda, who committed his artistic passions to capturing the soul of Cuba. Korda, whose photo of Che Guevara titled Guerrillero Heroico became an icon of the '50s and '60s, is thrown together in this unusual film with other legendary Cuban photographers, and even sits down to talk with Fidel Castro. It's an illuminating and fascinating step inside the mind and art of a rebel genius.

Farmingville, directed by Catherine Tambini and Carlos Sandoval and filmed in the States with Spanish and English subtitles, won the Special Jury Prize at this year's Sundance Film Festival. It's a detailed exploration of the Long Island community of Farmingville and the attempted murders there of two Mexican day laborers, which made headlines around the country. While such racially motivated conflicts have come to seem commonplace in the rural corners of the country, and especially in areas close to the border of Mexico, the Farmingville crime represented the first time such violence occurred in American suburbia.

The filmmakers spent a year living and working in Farmingville, gathering firsthand accounts of the story from local residents, political activists and other day laborers. It's one of those films that challenges accepted notions of the American Dream and makes a case for tolerance on all sides of the issue.

Up at the Raven Film Center, the festival reaches as far north as it gets (next year, Ukiah?), with an update on a Shakespearean classic and an expertly told coming-of-age story. Love Hurts (Nov. 17), directed by Fernando Sarinana and filmed in Mexico City, is a modern-day retelling of the Romeo and Juliet story (yeah, it's been done before, but not like this), in which a poor, comic-book-loving, graffiti-spraying skateboarder named Ulises falls hard for Renata, the pretty rich girl he bumps into at a ritzy shopping mall.

With stars in their eyes, the mismatched kids pledge undying love, naive to the reaction their families, culture and Mexico City itself will have to their class-crossing romance. Visually inventive, with a smoking soundtrack of rock and hip-hop, Love Hurts is Shakespeare with the heat turned up.

Hector (Nov. 18), filmed in Spain and an award-winner at this year's Festival de Malaga, is director Gracia Querejeta's father-and-son drama about a 16-year-old boy who must confront his own anger and a major family mystery after his mother dies. He moves to a new city where he gains a new guardian in the form of his eccentric aunt, and ultimately is reunited, awkwardly, with the father he never knew. Though the story may sound a bit familiar, the setting is gorgeous and colorful, and the acting is magnificent.

The festival ends with great logic in San Rafael's largely Latino Canal District, where a one-day, family-oriented screening of two films plays at the Pickleweed Center on Sunday, Nov. 21. Wizards and Giants, the first animated film from Mexico in 30 years, is filled with fanciful characters, including plenty of the titular wizards and giants. My Son Is a Genius, from Argentina, billed as a "hip, fast-paced caper" with dashes of comedy, mystery and assorted family-friendly weirdness, follows a video-game-addicted 14-year-old as he solves a daring art museum robbery.

From Che to Romeo to Eva to wizards, this year's International Latino Film Festival truly aims to provide something for everyone.