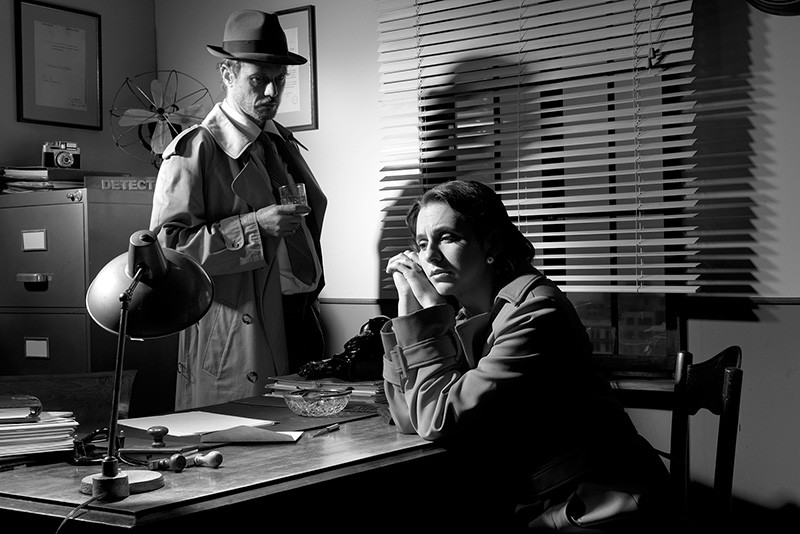 There is something refreshing about the noir worldview. There are crooks, good cops and bad cops, corrupt politicians, dames with looks that kill, and honest men fighting their way out of bad situations. Moral ambiguity has no place.

The noir genre, be it cinemagraphic or literary, endures because of its simple and enduringly American ethos. In noir, things are black-and-white, and that's the way we like it. We need the dark the to see the light.

"Amid such darkness and its concomitant truth, however ugly and mocked, despised, or kicked-down-the-road and disowned, a good man, no matter how far down the gutter he plummets, no matter how deep he gets in, how hard it is to pull out, no matter how tight and unrelenting the frame, still! You have a fighting chance against the Fat Man. Or Peter Lorre. Or a Chinaman with a blackjack in his hand. . . . Bring on the night!"

So goes the introduction to a delightful collection of neo-noir stories by North Bay writers titled Sons of Noir (Round Barn Press). The collection is edited by Ed Coletti and David Madgalene, who both contribute stories to the book.

The stories are set in San Francisco, Oakland, the Bogotá airport, nameless cities and, in one particularly hardboiled story by Waights Taylor Jr., the mean streets of Santa Rosa.

Taylor's story is classic noir and features a Scotch-swilling, lone-wolf private eye who finds himself in over his head on a case of high society and high crimes with a wine country twist: a meth lab masquerading as a winery. It's a kick to see the action play out on the rainy (remember rain?) streets of Railroad Square and Fountain Grove, and the back roads of Valley Ford. You've heard the story before— a crooked cop, an honest friend, a siren of a woman, a criminal enterprise—but Taylor renders it anew.

David Beckman's "In the Mission" is a standout of the classic double-cross variety, and a debouched gem. Beckman narrates the requisite violence particularly well, as in this scene:

"Jimi clenched his right fist, took his shoulder back and, getting a lot of hip into it, threw the punch into Max's belly. Max's lips made an O, he let out a sound like a bellows, lost his balance and, arms windmilling, fell forward, his knife nearly flying to the ceiling. Jimi stepped against the wall as Max' knees slammed hard onto the second step down with a crack like wood splitting, then watched Max roll forward and tumble on past, head leading, legs extending up and back. The knife cascaded ahead of him like some metallic bird."

"It's very timely again," he says. "Everything is broken or corrupt or you're in over your head. Those are very noir qualities."