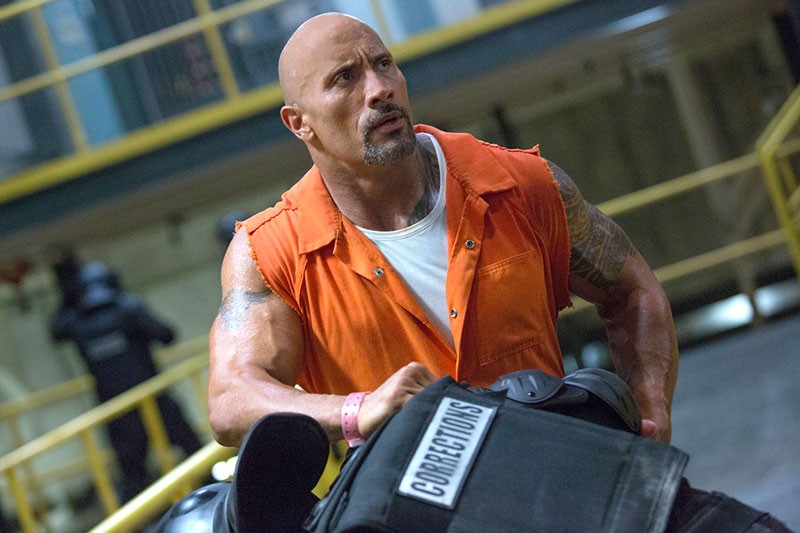 Are you serious, Fate of the Furious? The film is a roaring mess supercharged with spurious emotion, a spectacle of what looks like Matchbox cars in a blender.

Dom (Vin Diesel) is on an improbable honeymoon in Havana with Letty (Michelle Rodriguez). If Diesel's mind seems elsewhere—a polite way to describe watching Vin Diesel act—he's distracted by problems. His cuz is about to lose his car over a gambling debt. Diesel stocks his cousin's rusty wreck with NOx and drives it until it becomes a flaming wreck on the Malecón, destroying the car to save it.

Meanwhile, Luke (Dwayne Johnson) is trying to teach a group of soccer kids the haka, a kind of Polynesian Jedi mind trick. Barely has the Rock rolled his tongue back into his head when some damn government man, coyly calling himself Mr. Nobody (Kurt Russell), coerces him into action. The FF team is sought to rescue a Class IV weapon of mass destruction from some undifferentiated villains in Berlin. But then Dom double-crosses the gang!

The architect of Dom's backstabbing is the computer terrorist who calls herself Cypher, because the name Le Chiffre was taken. The white-dreadlocked genius (Charlize Theron) lives in an airplane and seeks to swipe an atomic bomb. Why? Her evil-genius speech claims she is "holding governments accountable." Villains used to quote Nietzsche; now they sound like a PIRG.

Only the kidnapping of someone close to Dom could have caused him to betray his car-swiping, terrorist-thwarting family. Could it be a wife, a child? It's both.

Continuing the "getting the band back together" part of the show, Jason Statham gets over bad blood with the Rock, the de facto leader of the Furiosos, until Dom comes to his senses

Missing, of course, is the late Paul Walker, acknowledged both in dialogue—"Brian would know what to do"—and in an aw-shucks finale. All they can do now is merge with The Expendables and head for outer space.

'Fate of the Furious' is playing in wide release in the North Bay.

Movies Fate of the Furious