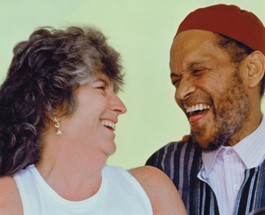 The book of photographs opens to a shot of a young girl without shoes, lounging in the grass at the 1969 Monterey Jazz Festival. Looking closely, it's clear that the girl in the photo is a young Jessica Felix, listening to Miles Davis on a summer's day.

Almost three decades later, not much has changed. On a recent hot May afternoon, Felix, barefoot, sits on the floor of her Healdsburg living room—but instead of being in the audience, she's behind the scenes, checking the incoming email on her laptop. "Someone just spent $640 on tickets!" she says. "Great!"

Felix is in "command central" for her 10-years-and-running Healdsburg Jazz Festival, where the décor is as busy and varied as a Sonny Rollins solo: a Gretsch drum kit sits in one corner, an original pressing of Thelonious Monk Plays Duke Ellington in another. Kitchenware competes for space with sculptures, cassette tapes, firewood, magazines, percussion instruments and 30 shelves crammed with CDs. Photos of such jazz luminaries as Billie Holiday, Johnny Hodges and Rahsaan Roland Kirk look down from every available wall space.

This is a real jazz fan's house, and Felix, founder and director of the Healdsburg Jazz Festival, is perhaps one of the most passionate supporters of the genre in the entire Bay Area. In a sea of phony-baloney festivals nationwide which prop up fading icons of pop and rock yet siphon from the cultural cachet the term "jazz" confers, the Healdsburg Jazz Festival is an island of taste and vitality for true jazz lovers. This year's festivities, running May 30&–June 8, mark the 10th anniversary of Felix's creation, and to celebrate, she's booked an incredible lineup featuring greats like Joshua Redman, Bobby Hutcherson, Charlie Haden, Cedar Walton, Charles Lloyd and Don Byron.

Felix throws Byron's Bug Music on the player, curls up on her couch and talks about the life of a jazz promoter. "There are a lot of people who don't understand jazz," she says, "I guess 'cause it's not easy, toe-tapping background music. But it's a great art form that has expression and feeling and so much emotion. It can take you somewhere, it can transplant your feelings. Most music is, you know—can you dance to it or not dance to it? Can you sing along to it? Jazz takes you on a journey."

Felix first fell in love with the genre right out of high school through Charles Lloyd's Forest Flower, which, she says, "really took me to the other side." She played the album every single morning for a year. Living in Los Angeles, she made some like-minded friends, and they'd go out to places like the Lighthouse in Hermosa Beach or Shelly's Manne Hole to expand their musical horizons.

After moving to the East Bay, she put on the annual Eddie Moore Jazz Festival at the old Yoshi's and presented one-of-a-kind jazz concerts in her Piedmont home for 10 years. It's the stuff that urban legends are made of. Giants like Michel Petrucciani, Dave Holland and Pharaoh Sanders played in the living room while Felix cooked for everybody in the kitchen. "We had almost a hundred people crammed in there," she says, recalling the magic of the performances in the restored Victorian. "When you have a grand piano and the music's right there, there's nothing better than that moment!"

In 1995, Felix moved to Healdsburg—then a sleepy, semi-rural town with more John Deere fans than John Coltrane fans—to work as a jeweler and store owner. Something about the wine country atmosphere beckoned jazz, she says, and she decided to put on a show at a small coffee shop with famed pianist George Cables. The night sold out, and Felix started planning her first festival soon after with three giants from the Blue Note era of jazz: vibist Bobby Hutcherson, pianist Cedar Walton and a towering drummer who would come to represent both the triumph and tragedy of the festival, Billy Higgins.

"Billy was so much the spirit of the festival," Felix says. "He was constantly reaching out to children and the community." With an amazing career, premiering with Ornette Coleman's original quartet and drumming on Lee Morgan's most famous records, Higgins was to headline the 2001 Healdsburg festival when a long battle with liver disease finally overtook him. Shattered, Felix nonetheless rearranged the year's lineup as a tribute; the festival's finale featured a half-dozen drummers honoring Higgins.

The hospitality and intimacy of Felix's Oakland house shows is an underpinning of the Healdsburg Festival, where artists lodge at guest houses and big-name concerts are presented in small-town venues. Many of the musicians bring their families, stay for days on end, and hate to leave. "When Roy Haynes left, he said it's the best he's ever been treated," Felix says of the most-recorded drummer in jazz. "To me, that was a sad statement. There are even people who ask me, 'Why do you treat them so well?'

"Them"—she sneers at the term. "Who are 'them'? I wish I could convey how important it is that these great artists get the respect they need."

Felix naturally finds it hard to name her personal highlights over the last 10 years. "Billy Higgins playing solo was amazing," she says. "Abbey Lincoln, I just love Abbey Lincoln. Roy Haynes. Of course, always having Charles Lloyd. I just can't pick a favorite. Every year, there are great moments."

For every big headliner at the festival—McCoy Tyner being a standout—there are a dozen lesser-knowns that Felix has struggled to promote in a county where the only "jazz" station plays smooth jazz. "I like a lot of creative, edgy jazz," she explains. "I haven't even brought one of my favorite bands, which is Trio 3, with Oliver Lake, Reggie Workman and Andrew Cyrille. But I have to be careful, because this area doesn't know how to listen to that kind of music that well."

That may be changing. By bringing jazz to a worldwide audience, Louis Armstrong earned the nickname "Ambassador Satch," and in the past 10 years, Healdsburg Jazz Festival ticket sales have steadily grown as more people recognize what Congress recognized in 1987—that jazz is a brilliant, thriving art form and a unifying force borne from American soil.

But don't be too quick to dub Felix "the Ambassadress," no matter how fitting the title may be. She's already got her own nickname, emblazoned on her license plate: "JAZZICA."

As this year's festival nears, Felix hasn't been sleeping much. Her mind races from one logistical concern to the next, and raising money to continue the festival remains her biggest obstacle. "Everybody comes to Healdsburg thinking that they can start something and that there's all this money here," she says, "but it's not that easy." She'd love to continue for another 10 years, but her back is giving out and she needs the rest. "Physically," she says, "I don't know if I could make it."

At the same time, Felix truly is the face of the festival; at almost every show, she announces the musicians like they were old friends. Many of them are old friends. Asked if she'd ever consider handing off the festival to anyone else, she's hesitant. "I'm just a fan who loves the music," she insists. "I never was that great an organizer, but all of a sudden, I've become the organizer! I was always the one who wanted to be the flaky one."

Of course, Felix is anything but flaky, checking her email during the interview, looking at ticket sales and coordinating promotions. But her face lights up the most when chatting about musicians, and she reflexively shakes her foot in time to Bug Music.

"I always feel like we've not only had great music," Felix says, "but we've had so much love. That's the only word I can use—love. It's a wonderful feeling of being together. It makes the music greater. You can feel it."

The Healdsburg Jazz Festival runs May 30&–June 8 in various venues throughout Healdsburg. For details, see www.healdsburgjazzfestival.com.