Documentary captures the unlikely production of a play at San Quentin 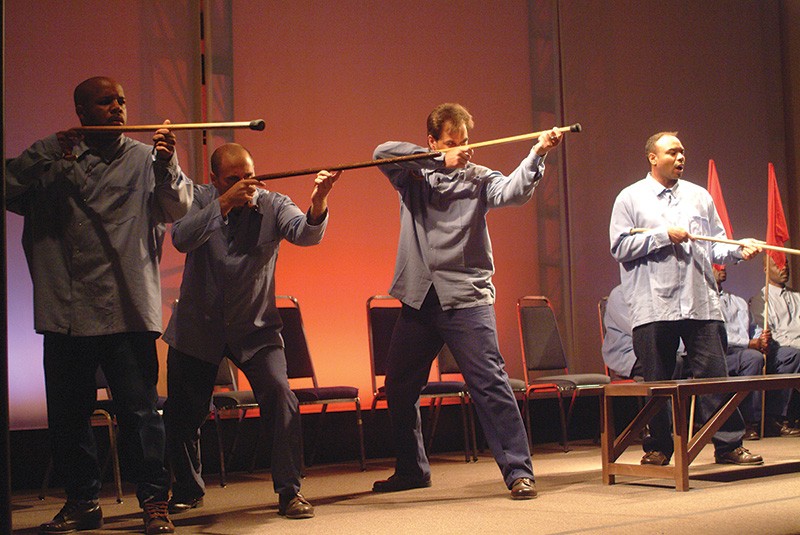 'They wrote me with pure heart," recalls San Francisco filmmaker Joe DeFrancesco, as he describes how he came to make the landmark documentary, 'John Brown's Body' at San Quentin.

DeFrancesco was describing letters that were sent to him by some of the San Quentin prisoners who had been in his production of John Brown's Body at the Marin County prison, back in 2002. James "J. B." Bennett was serving out a murder sentence at San Quentin when he was tapped to play the martyred abolitionist John Brown himself in the play, among other roles.

Bennett was one of the cast members who subsequently wrote DeFrancesco, after the curtain had gone down on their years-long project in the making. "I told him it was one of the best things that has ever happened to me," says Bennett, who now lives in Oakland. His comparison reaches to the very heights of enlightenment, and you can appreciate why DeFrancesco was moved to make his movie.

"This is kind of corny, but we have this idea of 'heaven' in the Judeo-Christian ethic," says Bennett. "Most of us have an idea and a concept of what it will be like. It's nice, you'll be floating around, maybe there will be a choir. There's nothing but beauty and development and growth. And that's what doing this play was like; it was kind of like dying and going to heaven."

DeFrancesco had wanted to stage the play for decades to honor an old schoolteacher, Father Clarence Rufus Joseph Rivers Jr., from his days as a Cincinnati Catholic schoolboy. But he didn't have any money to pay actors, he says, and admits that his initial motive for approaching the prison was pretty selfish: you didn't have to pay the actors.

DeFrancesco spent two years just getting permission to stage his play at the prison, and then plunged in for another three years of rehearsals. The result, as Bennett eagerly attests, was well worth it. John Brown's Body went on to a highly successful two-night "run" at the prison, with 500 attendees each night.

When it was over, DeFrancesco went back to his day job editing films for others, including George Lucas. He was broke, he says, and certainly had no plans to document the experience. But the prisoners wouldn't let him forget about the effect this production had had on them, amply demonstrated in the documentary, which cuts between footage of the two nights of performance and subsequent interviews with the prisoners.

The story of how this film came about is almost worth a film itself, except that the story is artfully embedded within the arc of the final documentary. "It was 10 years in the making," says DeFrancesco. "I had no intention to make the documentary film. It didn't even occur to me that we could do anything like that."

The film, which unspools at the Congregation Shomrei Torah in Santa Rosa on Saturday, Jan. 17, features a cast of eight prisoners performing a staged version—with very minimal props and scenic backdrop—of the 1928 epic poem of the same name, written by French poet Stephen Vincent Benét.

The challenges were vast and presented numerous opportunities to bail on the whole project. Women weren't allowed onstage, so their roles were pre-filmed and the onstage actors had to ace their cues to ensure narrative continuity. Tricky stuff, and amazing to watch.

Because it was an ensemble, black prisoners played Confederate soldiers, among other roles—and speak freely in the film about their mixed feelings when it came to "sympathetically" portraying the slavers. The cast used canes borrowed from the infirmary to indicate guns.

In its grand, Homeric sweep of the American Civil War, the poem details the pre–Civil War attacks on slavery by John Brown, proto-abolitionist, and his efforts to trigger a slave rebellion in the South by attacking Harper's Ferry in October 1859. The attack was a disaster and Brown was captured and killed. The rest? History.

DeFrancesco says he wanted to honor John Brown—and, through him, honor his Catholic school teacher who had given him his first taste of the Benét poem as a student in Cincinnati.

"There's a phrase in it," says DeFrancesco, "and I was unable to forget it when I first heard it." Benét describes the state of the antebellum South as being a land of "graciousness founded on a hopeless wrong." The line is highlighted in the film.

James Bennett recalls the first day of rehearsal. "I was reluctant at first," he says. A female prison employee had approached Bennett and told him about DeFrancesco's plan. "She said to me this man from San Francisco wants to do a stage performance of a poem called John Brown's Body. I didn't want to do that, I told her. Too much work."

But Bennett was convinced otherwise, and went on to play Brown himself in the performance. "I went to the first rehearsal and I met Joe," he recalls. "He showed us that famous opening monologue of George C. Scott in Patton, and tells us, 'This is the level I expect you guys to get to.' I thought that was kind of neat."

The rehearsals went on forever.

Then, after getting the OK from prison brass, he employed high-tone cinematographers and sound men to film the two-hour production. There was an off-stage choir, brought in from San Francisco, that provided an ethereal, soulful backdrop to the onstage action.

The choir's arrival marks a turning point in the film, where prisoners see for themselves the lengths to which DeFrancesco was going to bring the powerful stage performance home. They are, frankly, blown away.

But none of it would have happened were it not for those letters DeFrancesco was getting. He had moved on and gotten back to making a living. "I thought, that was it," he says. "I had no money, I was broke and exhausted. Then I got hired as an editor, as part of the team George Lucas put together to do a series of 100 documentaries on people and events that shaped the 20th century."

But the prisoners wouldn't let it go. In their letters, the prisoners didn't ask for anything, says DeFrancesco, but their passion and emphasis on how the experience had changed and moved them—and in turn moved him. "Most of them were in for murder, capital crimes, he says. "The letters were very eloquent," he says, even if the men who wrote them lacked in education. "These men have achieved very little in their lives, and this was so odd, and so above some of them, they couldn't get over it."

DeFrancesco then set out to interview the men who'd starred in the play. By now, some had been paroled-out of the prison, others had been transferred and others were still serving out their time at San Quentin. By 2011, he'd nailed the interviews. "Around the middle of 2011, I got the last one and thought, 'I can make a film.'"

They loved it at the Mill Valley film festival in 2013. For Bennett, the experience has continued to inspire him as he makes his way through life as a free man. When we spoke, he was sitting at the Franco Gallo Plaza in Oakland, enjoying a sunny winter afternoon.

"It gets more and more wonderful," he says. "With each passing day, it just gets better."