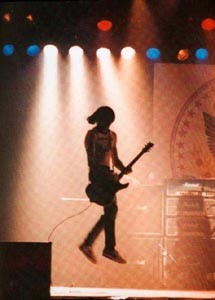 These are dark days for Ramones fans, let alone actual Ramones. On June 16, former Ramones drummer Marky Ramone announced via an interview with RollingStone.com that ex-band mate Johnny Ramone's health was in decline due to a four-year tussle with prostate cancer, and that "at this point, [the cancer] has started to go into other areas of the body."

The following day, Johnny's publicist released a statement downplaying the urgency of Johnny's condition, while confirming that Johnny was indeed in the hospital receiving treatment for an infection related to prostate cancer and that he was expected to be released the following week to continue his recovery.

Ultimately, whatever Johnny's health issues may be, they're none of our business. I just want him to be well.

Rock 'n' roll--nay, the world--desperately needs Johnny Ramone, who is an incredible force of conservative individualism and authenticity in a sea of bullshit poseurs who air choirs of political protest but probably don't even vote. Let's face it, being a staunch Republican and an NRA member in the otherwise decidedly left-leaning genre of punk rock is not widely thought of as cool. But, in classic Ramones tradition, Johnny does not care.

After 20-odd years at his self-appointed post of drill sergeant for the eternally (and famously) squabbling band, Johnny happily retired into oblivion in 1996, living in L.A. and spending his hours in the company of televised baseball games, classic horror flicks and assorted rocker pals like Vincent Gallo and Eddie Vedder. And even though Johnny has been very involved with Rhino Records' reissues of the Ramones' back catalogue, I have friends whose parents lead more active retirements than that. Johnny--née John Cummings--has, however, always been a bit of an old fogey, and it's this quality that held the "brudders" together for two-plus decades. It was his job--Johnny made it his job--to be a professional drag.

Let's face it: Johnny made the Ramones. Most accounts paint him as a businesslike tyrant whose political ideals typically clashed with the rest of the band and whose no-nonsense work ethic took more than a few cues from his stint in military school. A vehement Reagan lover, Johnny insisted that the band change the title of their Joey-penned, Reagan-knocking 1985 single "Bonzo Goes to Bitburg" to "My Head Is Hanging Upside Down" for its album release; the song only joined the Ramones' canon in the first place because a band is a democracy, and Johnny was outvoted.

According to the Ramones' self-designated roles, Joey was the gangly space alien with a heart of gold; Dee Dee was somehow both the cute one and the drug-addled, tortured-genius one; Tommy, as the drummer and the shortest in stature, was a much-needed force of normalization. That left Johnny to be the mean one.

Go figure. Look at any given image of Johnny, and you'll see only two facial expressions: one stoic and sour; the other, a frenzied mug, lips pursed, cheeks puffed out like a blowfish, singular in purpose and dynamic as the machine-gun slinging of his trusty Mosrite guitar. The Johnny Ramone concert stance--feet apart, bowl cut swinging--is immortal. It is rock.

And yet Johnny is typically not folks' favorite Ramone. I've always been a Dee Dee girl myself, falling for his idiot-savant complexity (RIP 2002, baby), while historically Joey's human-walking-stick build and lead-singer status (RIP 2001, baby) made him the most recognizable.

Any dedicated Ramones fan, however, must acknowledge that without Johnny, there is no Ramones. Imagine the countless hours they spent together in buses and vans, crisscrossing the continents and crashing in hotels. Who would be strong enough to keep an alcoholic, a coke fiend and a crazy heroin junkie in line? Johnny, that's who.

We, as a public, could be more understanding. I'll love the Ramones 'til the pinheads come home, but I wouldn't want to be one for the world. Those guys gave their sanity to chase their dreams and alleviate the painful, shapeless resentment of a zillion disaffected youth, old farts and lifelong punkers--never mind that it may have been resentment spawned by Johnny's much-adored Reagan administration.