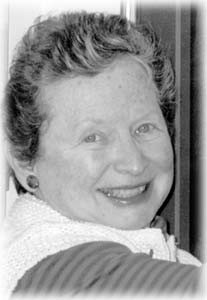 Stopped the Presses: 'Chronicle' reviewer Judy Stone has lived a life in print.

JUDY STONE, late of the San Francisco Chronicle, would like to distance herself from her former co-worker, the Little Man. The Little Man is the Chronicle's four-star film mascot and probably the best-known member of the Chron's staff now that Herb Caen is gone, even though he does only one of four things: jump up in his seat, lean forward with interest, slump listlessly, or doze.

"I hate the Little Man," says Stone, seated in lobby cafe of San Francisco's Kabuki Theater during a break from press screenings at the San Francisco International Film Fest. "People just look at what the Little Man is doing, and don't read the reviews--reviews that someone spent a lot of time working on."

Stone, a physically small but quite formidable lady in her 70s, is at the film festival to be honored on the release of her book Eye on the World: Conversations with International Filmmakers (Silman-James Press; $35). She appears Thursday, May 8, at North Light Books to discuss her book and career.

The book collects interviews with some 200 directors Stone has encountered, including local heroes Francis Coppola and George Lucas, and the lesser-known but just as important San Francisco film director Philip Kaufman (The Unbearable Lightness of Being). Stone also talked to such titans of cinema such as Luis Buñuel, John Huston, Jean-Luc Godard, and Louis Malle.

Capping Stone's nearly 30-year-long tenure as the most powerful print film critic in the Bay Area, Eye on the World reflects Stone's best assets as a film reporter: a strong sense of social responsibility and a lack of prudery--a fault quite common in daily critics--that allowed her to see beyond the raw subject matter of such films as Jean-Claude Lauzon's surreal story of an insane Montreal family, the 1992 Leolo, and Dusan Makavejev's 1974 scatalogical Sweet Movie. "I really understood what Makavejev was doing," says Stone. "I worked really hard writing about Sweet Movie; it got dumped-on here."

The title Eye on the World honors one aspect of foreign film--its ability to give a periscope view into parts of the earth you'd never see otherwise. "Writing about these films was all a learning process," says Stone. "I didn't go to these films always knowing about the countries they came from. It was a lot of work. Critics ought to provide some context for the American audience. Often I'll see critics, and I won't mention their names, who wrote about films concerning the Irish troubles without knowing anything about the situation in Ireland."

The child of Jewish immigrants from Russia, Stone is the sister of famed investigative journalist I. F. Stone. "I have three older brothers who are journalists, and they're all influences," she replies crisply when asked if "Izzy" Stone had led her into the newspaper business.

Before Stone was out of junior high school, she'd written her first movie review, of the 1936 The General Died at Dawn with Gary Cooper and Akim Tamiroff. Before she left high school, she'd interviewed scientist Madame Curie, writer William Saroyan, and the actor and singer Paul Robeson. "I saw his Othello in Philadelphia and I could never see anyone else in that role. Robeson was unfairly rejected by black people because of his pro-Soviet ideas. That voice was magnificent. He was wonderful to interview," says Stone, adding with her characteristic sharpness. "I can't say the same for his wife. "

Stone dropped out of Temple University during World War II to work in a radio factory as her part of the war effort. There she acted as managing editor for the Square Dealer, the newspaper of the United Electrical, Radio and Machine Workers of America CIO. This began her journalistic career. Before joining the Chronicle, Stone worked for the Marin Independent-Journal as a reporter during the early 1950s.

Among Stone's big stories is one that eventually became a book--meeting the reclusive author B. Traven (The Treasure of the Sierra Madre). Or did she meet him? "Hal Croves," the man Stone interviewed, was a regular pose assumed by Traven (who, to make matters more confusing, is generally thought to have been one Otto Feige or, possibly, the Bavarian revolutionary Ret Marut--the name Marut itself being assumed).

"Croves said he wasn't Traven," says Stone. "He kept denying it, saying that he was Traven's agent. Croves' widow says her husband was the illegitimate son of Kaiser Wilhelm II, for that matter. I don't think we'll ever really know if B. Traven was one man--a great literary mystery, still. Read Traven's jungle books," she exhorts, "Man of the Jungle, Bridge on the Jungle, all about the exploitation of Indians--and you'll learn a lot about what's going on in [Chiapas, Mexico] today."

Since Stone received a buyout offer from the Chronicle three years ago, she's retired from daily reporting. Some would say she'd gotten out when the going was good, by missing--or rather not seeing--Independence Day and the newest cycle of natural disaster films. When asked her opinion of what the single worst influence on movies was in the last 50 years, she replies immediately. "It was the success of Star Wars. I hate to say this, but from that point on the studios went for blockbusters. For the amount of money Star Wars made, it had a bad influence."

To Stone, covering film was covering a beat, and she is undazzled by star power. "I consider myself a reviewer, not a critic. When you work for a daily paper you don't get a chance to go into depth; I leave that to Kael [ex-Petaluman and former New Yorker magazine critic Pauline Kael]. I'm not a film buff," she says briskly. "I don't want to see every movie ever made. There's a lot of garbage out there."

From the May 1-7, 1997 issue of the Sonoma County Independent