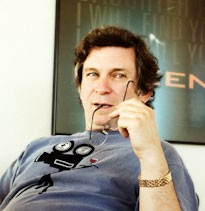 Much to his credit, Robert Kamen is not among those wildly successful persons with a passion for wine, etcetera, who dissemble their primary professions behind the smoke and mirrors of some Italian great-grandfather who stomped grapes with his bare feet in the Old Country when said millionaire-cum-winemaker-to-be was less than a peppercorn in his salami. In Kamen's new tasting room off of Sonoma Plaza, key lines from the Hollywood screenwriter's best-known features are displayed front and center. They're also available on screen-printed T-shirts, which are packaged in little film cans. Fun.

Not so fun was the ironic fate that befell Kamen's vineyard after the release of his wine country–themed A Walk in the Clouds, the 1995 sedative whose active ingredient is Keanu Reeves. The flick starts as comedy, then lingers in melodrama, highlighted by a gorgeous scene wherein Reeves and his screen paramour don angel's wings to help save her father's vineyard from a frost event. Note to North Bay winegrowers: stock up on angel's wings and save the salmon.

Just as viewers grow comfortably somnolent, a fire rages through the vineyard. I won't spoil the ending, but I must warn those with viticultural sensitivities that they may wish to look away. Back at the tasting room, my host—well-informed and adept at keeping visitors engaged with easy banter—tells me that local grape growers laughed at the scene, filmed at a Napa Valley vineyard that was scheduled to be pulled out and apparently doused with kerosene. "Vineyards don't burn like that," they said. Kamen didn't exactly have the last laugh. The next year, his vineyard burned down in a fire attributed to a PG&E oversight.

Bouncing back like the Karate Kid, Kamen has returned, offering a lineup of mountain-grown estate wines, farmed by Phil Coturri. The 2011 Sauvignon Blanc ($42), 20 percent aged in neutral barrels, is priced steeply, considering that some of the county's most highly regarded SB is ticketed at $10 less. Still, with chalky acidity, floral aromas and round but crisp lychee fruit, it's pretty damn good. The 2009 Writer's Block Proprietary Blend ($50) of Cabernet, Syrah and Petite Sirah has a heavy purple pigment aroma, perhaps from the Petite, and Cab-like tobacco overtones. It's rumored to have helped some of Kamen's associates get over their own writer's block. Across the board, the Cabernet Sauvignon, from the 2005 ($105) through the 2009 ($80), has a singular, intense red fruit flavor over inky tannins.