Puckering up for poetry 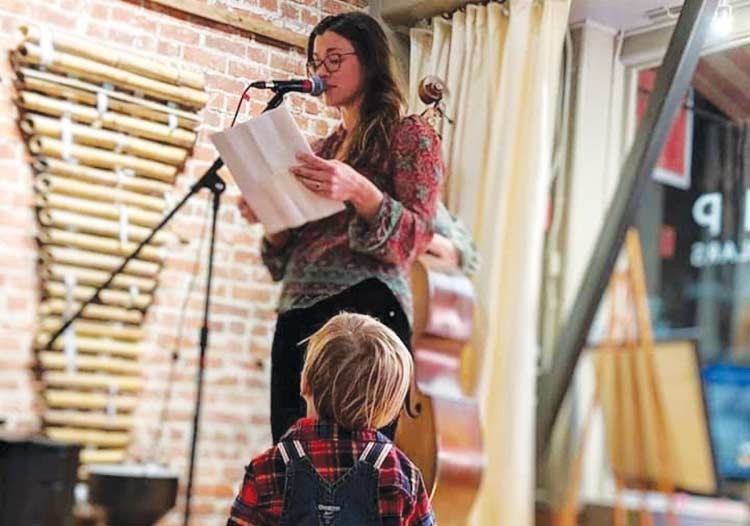 Despite the old warning that one should never "kiss and tell," the exact opposite has happened for the past six years at Bump Wine Cellars, located just off of Sonoma Plaza. The sixth annual "Kiss and Tell," a poetry-performance event presented by the Sonoma Writers' Workshop, proclaims love in all its dimensions on Thursday, Feb. 13 at 6:30pm.

What began as a loose consortium of writers, poets, screenwriters and novelists, coalesced into the Sonoma Writers' Workshop, an enclave of productivity, mutual criticism and cheerleading, which in turn morphed into a performance group. That group now overflows Bump Wine Cellars with a rapt crowd for, of all things, poetry shows. With names like "Dry is the New Wet," "Things that Go Bump in the Night" and the aforementioned "Kiss and Tell," the events are a surprisingly boisterous take on the traditional art form of poetry.

"It started with several of us bemoaning the lack of a hip literary scene in Sonoma," says cofounder Lisa Summers. "It was that or Bunco. Or worse—book groups."

The initial event occurred in 2015.

"There's been a real magic to our performances—from the first event we called 'Naked and Drunk Poets,' when none of us knew what to expect or how we'd be received," says cofounder Stacey Tuel. "It turned out to be a packed house and so much fun. That inaugural performance brought something very different, and needed, to sleepy little Sonoma. It was a place to reveal ourselves with our words—of course, Jonah took the revealing quite literally."

Proclaiming his poetry as if from high on a mountaintop, Bohemian cannabis-columnist and author Jonah Raskin often attends in drag and occasionally naked.

To say the poetry event is a raucous take on Sonoma's literary scene is an understatement, as year after year it opens minds and hearts, not to mention poetry books.

An affectionate crowd appreciates the special house vintages offered by Bump Wine Cellars proprietors and hosts, Mieko Imai and Geordie Carr. Steve Della Maggiora, on accordion, and Steve Shane, on stand-up bass, are available to accompany the poets. The general vibe is reminiscent of the old Beat poetry readings in San Francisco.

Tuel is often at the mic with a guitar around her neck and a toddler at her feet, serenading her rapt audience with one of her original songs. Tuel gave an especially poignant performance just after the 2017 fires.

"Our annual 'Bump in the Night' event in 2017 was right after I'd lost my house in the fire," she says. "We didn't cancel the event and it became an important gathering for our collective grief. That night, through lots of tears, I read my poem, 'The Call of the Phoenix,' for the first time. There was so much healing through our writing that year. Maybe that's what I like so much about the performances: we can both reveal and heal ourselves."

Emceeing the spectacle is Bohemian-editor Daedalus Howell, who introduces the Sonoma Writers' Workshop–poets during Act I of the evening, then hosts an open mic for Act II. Those who want to participate in the open mic must catch Howell before the event, when he's taking down names in his reporter's notebook.

Originally called the Writers' Workshop and comprised of Tuel, Summers, Howell, Raskin and AJ Petersen, the group met weekly to critique their writing. Raskin, the most well-established writer in the group, with dozens of published works to his name, had recently wrapped up his career as a Sonoma State University professor. Petersen, a former instructor at the Iowa Writers Workshop, was likewise ready for a new challenge. Summers was completing an MFA, Howell was on the home stretch of his second novel and Tuel was a riot of poetry and songwriting.

"What I remember most about our 'workshop' era was that I felt a sense of alchemy in the way our ideas, stories and poems evolved when we shared them," Tuel says. "It felt like a big cauldron of ideas, words, synchronicities. There was the real work of reading, editing and commenting on each other's work, but the creative spark ignited when we met together. And I'm infinitely smarter with the collective intelligence of that crowd."

Before long, it became obvious they all wanted to get their work out there. They started a collective press, called FMRL, to publish their books, and began organizing poetry events. It became important for them to share their work with the community and invite others to do the same.

"We realized that the events are what keep us writing," Summers says. "You have to have an audience, otherwise you risk—like my favorite creative-writing teacher used to say—'becoming the Unabomber.'"

"Our annual 'Kiss and Tell' has a special importance to me because my personal love story started at our first 'Kiss and Tell,'" Tuel says. "That was my first real date with Taylor. I've missed some events over the past few years because of the birth of our son and getting lost in babydom, but at last year's 'Kiss and Tell,' he and our two-year-old were there listening to me read the poem that started it all. That's pure magic. I'm looking forward to what magic will happen this year as we keep 'Kissing and Telling.'"

Howell sums up the group, and the event, with a quote from a John Hughs film: "What we found out is that each one of us is a brain, and an athlete, and a basket case; a princess and a criminal. Does that answer your question? Sincerely, the Breakfast Club.'"