'Doris' is a bittersweet take on romance and aging 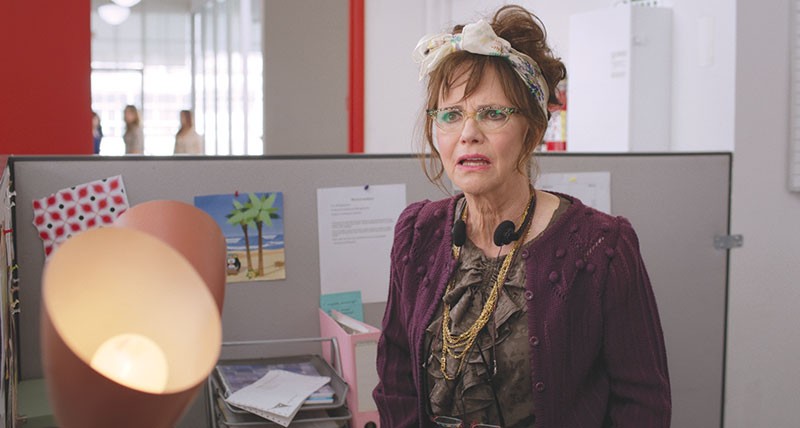 Mortality shades director Michael Showalter's comedy Hello, My Name Is Doris. The slight, but endearing plot has an armature—a significant mention of The Glass Menagerie sets the stage. Like poor Laura in the Tennessee Williams play, the aging Doris (Sally Field) has been walled up tending her frail mother and is gradually turning into a trash-picker and a cat-pamperer.

Doris still works 9 to 5, rocking her batty personal style at a chic clothing manufacturer in Manhattan; she's bedecked with bows and found objects, and a double pair of glasses. Doris has an excellent pair of vintage mother-of-pearl-encrusted cat's spectacles that she can't give up even if she can't read with them. Her eyesight, however, is good enough to see a new marketing person, John (The New Girl's blandly cute Max Greenfield); Doris falls for him hard and fast, even though he's about 40 years younger than she is.

Speaking of eyes, they're the last thing to go on an actress, and Field's are sharp, dark and expressive. I'd like to speculate that Field was the subject of Amy Schumer's "Last F***able Day" sketch because Schumer had seen Field in person and witnessed her charm. It's a strange experience to see an actress evolve from a 1960s beach bunny to an elder, but there's a lot that time hasn't worn away. Field plays her comedy in a hushed ladylike voice, and she's lithe enough to fit into spandex when she descends into Brooklyn.

"These people have welcomed me into their world," Doris says, and the excursion, of course, is bittersweet. Despite agile support from Natasha Lyonne and Tyne Daly, the film doesn't fire on all cylinders; we're not allowed to take the crush all that seriously. Still, Field—in nearly every scene—savors the material and runs with it. Likability has never been her problem, and you see through her age to a strange, merry spirit that never seems too manic or pixie-ish to bear.

'Hello, My Name Is Doris' is playing in wide release in the North Bay.