'From Up on Poppy Hill' passes the torch 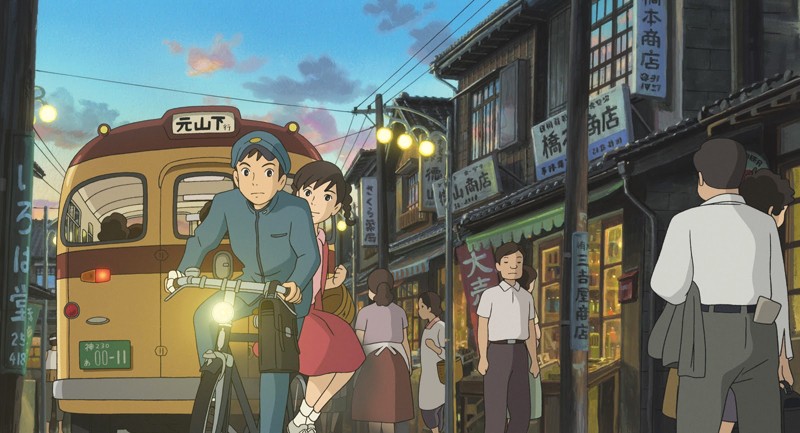 The dubbed version of the feature-length cartoon From Up on Poppy Hill, co-written by master animator Hayao Miyazaki and directed by his son, Goro, has a taste of expurgation. In 1963, Umi (voiced by Sarah Bolger), a high school girl from the green outskirts of Yokohama, is working hard in the kitchen of her grandmother's boarding house, her father having been killed under unexplained circumstances.

The post-WWII relations between Korea and Japan are a loaded subject, dense with mutual prejudice. If indeed these are the details that are missing—because something is certainly missing—they explain the nature of the family secrets keeping Umi and her lover, Shun (voiced by Anton Yelchin), apart.

Shun has a political cause: the ancient, rickety student union called "the Quarter Latin" is scheduled to be demolished, and he and his friends want to save it. This old firetrap is a symbol, naturally; as in so many Studio Ghibli films, the tension lies between renovating the past and cherishing tradition. The movie is staged during a beautifully chosen moment of transition—the months right before the Tokyo Olympiad. (Goro Miyazaki was a landscape architect before joining the family business; watching From Up on Poppy Hill, the old career seems significant—the movie is full of vistas.)

With affection and loving detail, Goro Miyazaki shows this realm behind the crossed young lovers, who navigate it on a bicycle. And there's the perfect evocative song accompanying them, "Ue o Muite Arukou" sung by Kyu Sakamoto—best known as "Sukiyaki."

Movies From Up on Poppy Hill Studio Ghibli Goro Miyazaki