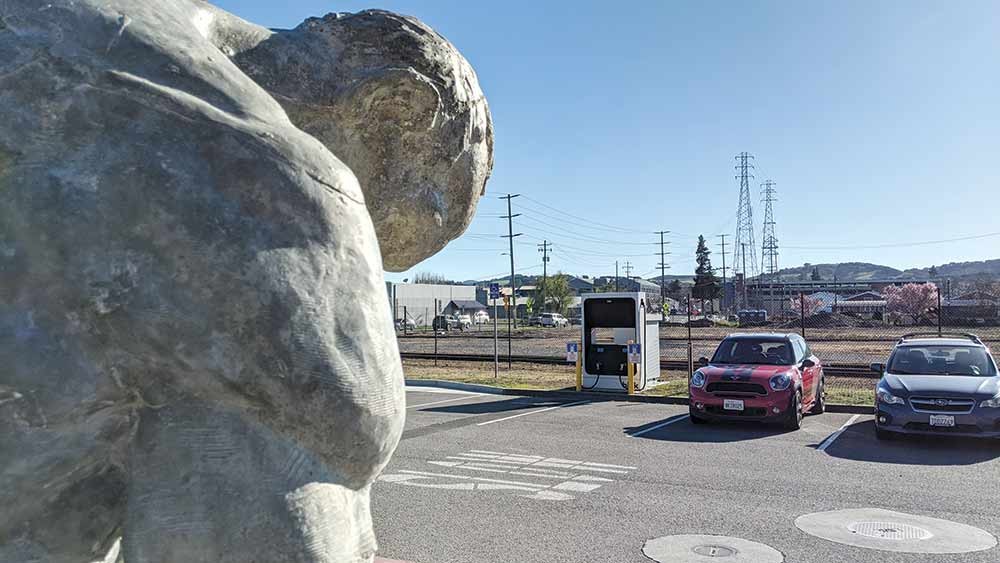 Late on the night of Monday, Feb. 24, the Petaluma City Council narrowly approved a controversial, multi-part land deal in order to fund a second train station for the city.

Critics of the deal between Petaluma and Lomas Partners, LLC—a Southern California company businessman Todd Kurtin owns—say none of the parties involved have been responsive to criticism of the proposed designs, the process of approving the project and costs to the city.

Ultimately, the deal, which in part requires the city to contribute $2 million to cover some of the costs of the new train station, could leave the city with little leverage over the design of a downtown housing development and a related off-site affordable housing component, critics say.

After hours of discussion and public comment, almost unanimously against the current project proposal, the City Council voted 4 to 3 to support a development agreement with Lomas Partners and several related documents to greenlight Lomas' interlocked housing development proposals.

There is at least one more significant hurdle for the project. The agreements approved by the City Council will be void if the city cannot secure a formal commitment from SMART to construct the Corona Road Station, which, if completed, will be the city's second train station.

To that end, the Council directed staff to set up a meeting with SMART to reach an agreement.

Here are some of the details of the deal:

In August 2017, Lomas Partners, LLC, signed a deal with SMART to purchase 315 D St., a 4.48-acre piece of land next to Petaluma's downtown station, for $5 million. In exchange, Lomas would donate 1.27 acres of land at 890 McDowell Blvd. and build a 150-space parking garage on it. Under plans filed with the city, Lomas would construct 110 homes on the remainder of the 890 McDowell Blvd. parcel.

According to a Petaluma staff report, SMART plans to use funds from the sale of the 315 D St. property to pay for work on the Corona Road Station. SMART has not set aside any other funds to complete the station, Petaluma city staff said Monday night.

Petaluma will contribute $2 million from its traffic abatement fund to cover some of the costs of constructing the Corona Road Station, according to the development agreement.

Once Lomas purchases 315 D St., it plans to sell development rights for the property to Hines, an international development company based in Houston. But before it does that, Lomas needs to meet the city's affordable-housing requirements.

Generally, the required number of affordable units—or alternative fees paid if the developer gets permission to not build the affordable units themselves—are calculated as a percentage of the total proposed market-rate units.

However, Lomas has not submitted formal plans for the downtown development. To date, it has only filed "conceptual plans" calling for approximately 405 housing units, according to a city staff report.

If the final project does include 405 units as anticipated, the city will require the developer to construct 61 affordable units—approximately 15 percent of the total number.

Evidently Lomas does not want to build those units in its downtown project—presumably because that's a less-profitable prospect, given that 315 D St. is in the heart of Petaluma.

Instead, at a Jan. 27 City Council meeting, Lomas proposed building all of the affordable units at 1601 Petaluma Blvd. S., a 2.5-acre piece of a former quarry located on the shore of the Petaluma River directly below Highway 101. Lomas will also contribute $862,208 to the city's affordable-housing fund as part of the deal.

After complaints from community members and city councilors at the January Council meeting, Lomas agreed to build 11 of the affordable units downtown and 50 at the former quarry far from downtown.

In comments at the Feb. 24 Council meeting, Rich Wallach, Burbank Housing's director of housing development, indicated that the developer is confident that it will secure outside funding to complete the project, pending a few recent changes to the funding program the developer is applying to.

With such a complicated project, a layperson might expect this kind of project to remain mired in city bureaucracy for years. Instead, Lomas was able to win approval of the project from the City Council, despite the fact that the Planning Commission voted against the development agreement and the proposed plans for the 890 McDowell Blvd. development at two meetings last year.

Several council members who voted for the deal acknowledged flaws with the project proposal, especially the affordable-housing aspect, but indicated that the deal might be the city's last foreseeable chance to get a second SMART station.

Here are two of the factors at play:

Second, the development agreement between Petaluma and Lomas states that, "SMART indicates that construction work for the Second Petaluma Station [at Corona Road] must coincide with the completion of the construction work on the planned Windsor SMART station scheduled to commence in March, 2020 ..."

Here's the implication: If Petaluma doesn't approve the agreement with Lomas now, Lomas won't pay SMART for the 315 D St. property, SMART won't begin work on the Corona Road Station after they complete the Windsor Station work and Petaluma will lose hundreds of new downtown housing units (read: tax dollars) in the process.

Although SMART's 2017 deal with Lomas dictated much of the conversation around Petaluma's development agreement—including the shortened timeline on the decision—SMART staff did not speak at the City Council meetings that included discussion of the Lomas deal, nor did SMART return a request for comment.

As part of their approval, the City Council directed city staff to arrange a meeting with SMART to hammer out a formal promise from the transit agency to construct Corona Station. If they cannot reach that agreement with SMART in the next few months, the convoluted Lomas deal may fall apart after all.