John Leguizamo learns what he doesn't know in one-man show 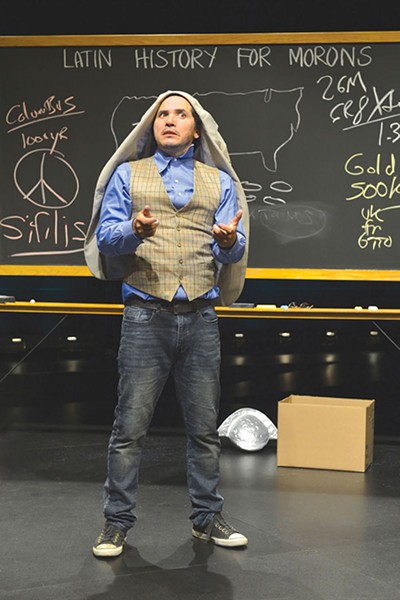 It's a joke that probably dates back to the time of the Aztecs. Attempting to prove mental superiority, a poor schlub reveals a hilarious series of intellectual failings. In the Aztec version, that was probably some guy about to be sacrificed to Quetzalcoatl.

Or did the Mayans do that?

Damn. I guess I'll have to go see John Leguizamo's Latin History for Morons again. Written and performed by the actor best known as the voice of Sid the sloth in the Ice Age movies, Latin History for Morons is alternately silly, sour, sweet, sick, offensive, insightful and dumb-as-a-post. The antic solo show was directed by Tony Taccone with the kind of manic energy one expects from a Mel Brooks movie or an episode of The Simpsons. Arguably less artistically successful than those icons of smartly stupid comedy, this breathless, sloppy, big-hearted and surprisingly joyous celebration of Latino culture nonetheless aims for brilliance, even if it never quite achieves it.

But as the Mayans once said, "If you aim for the stars and miss, you could still end up on the moon." Or was it the other way around? And was it the Incas who said that?

The basic story—and I beg your indulgence for using so grandiose a term for a show so lacking in actual plot or, you know, story—hangs on Leguizamo's colorful description of his efforts to uncover useful facts about Latino culture, all to help his young son as he struggles with a daunting homework project at school.

That the "facts" this frantic father offers his son are so full of errors is a huge part of the fun of the show, in which the storyteller reluctantly has to face that he knows far less about his own history. From the Mayans, through the Incas, and on to the Aztecs, Leguizamo's drive to identify a heroic example from Latino history continuously fails, giving the gifted actor plenty of chances to unleash outrageous gags, brilliant improvisations and frequently inappropriate analyses of history and Latin-American culture.

By the time Leguizamo drops the names of people like Carlos Santana and Supreme Court Justice Sonia Sotomayor, his proud Latin American son has acquired a far better understanding of who he is, and why that matters, and it's this that transforms an otherwise uneven show from a wacky comedy into something profoundly and universally lovely.