Laugh Till It Hurts 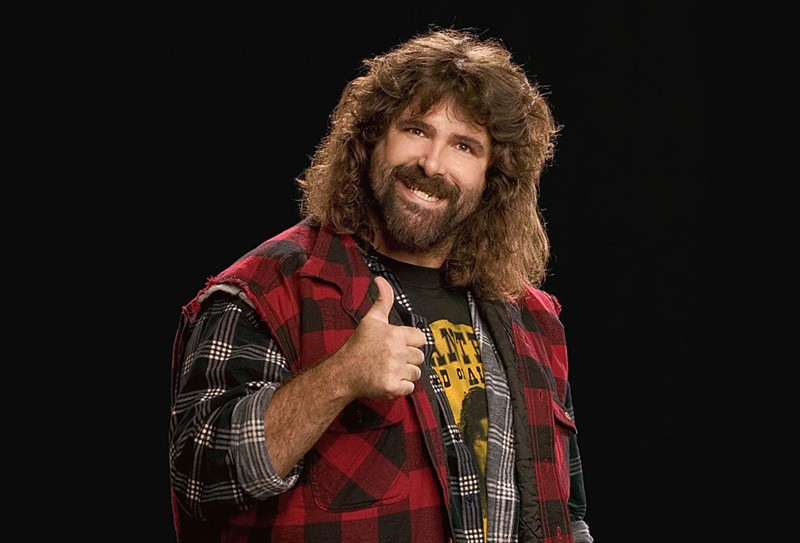 There is a scene in the 1999 wrestling documentary Beyond the Mat, where Mick Foley (aka Mankind), one of the film's main subjects, takes a pretty gruesome beating during one of his matches.

The beating wasn't unusual, but what's eye-opening is finding out—from the behind-the-scenes glimpse of the match—just how real the carnage actually was. Even more unsettling, the filmmaker taped Foley's wife and kids' reaction to the match. They were horrified.

The film didn't just show Foley's high threshold for pain. It contrasted his crazy stage antics by showing that, off the mat, he is a kindhearted and loving family man who is bright, funny and well-spoken.

Now that Foley is retired from wrestling, he's done a lot more to show his wit and sense of humor. He's a bestselling author, comedian and spoken-word artist.

"There are laughs to be had even during my most serious matches—even driving in an ambulance after losing an ear in Munich, Germany," Foley says. "When I'm onstage, I feel very much like I did when I was in the ring, but without the late-night emergency-room visit."

Foley's career as a wrestler didn't last much past the release of Beyond the Mat. During routine doctor visits, he was strongly advised that he should quit, or face potentially life-threatening injuries.

In 1999, Foley published the bestselling memoir Have a Nice Day: A Tale of Blood and Sweatsocks. He took the opportunity to address politics and current affairs. Foley then tried standup comedy.

"I was pretty good. It's just that when I got to the Just for Laughs festival in Montreal, I realized that it might take 20 years to get as good as some of these guys, but even Louis CK couldn't tell a story about finishing a match with his tooth stuck in his nose," Foley says. "As the great Australian comic Brendon Burns put it, 'Mick's got the advantage because all of us talk about our day jobs and he had the coolest day job of anyone.'"

Two years ago, Foley moved away from a traditional standup style and made it more of a "storytelling" approach.

What he's doing now isn't much different than what Beyond the Mat did. Foley enjoyed being part of the documentary, though not everyone did—in particular World Wrestling Entertainment CEO Vince McMahon.

"He thought it took away people's ability to enjoy the magic of what we did onscreen," Foley says. "I always felt like the world behind the scenes was every bit as fascinating, if not more so than what people saw on TV.

"I always thought of the WWE the way Dorothy thought of Oz. Some of it was horrible. But most of it was wonderful. It's a very surreal place."