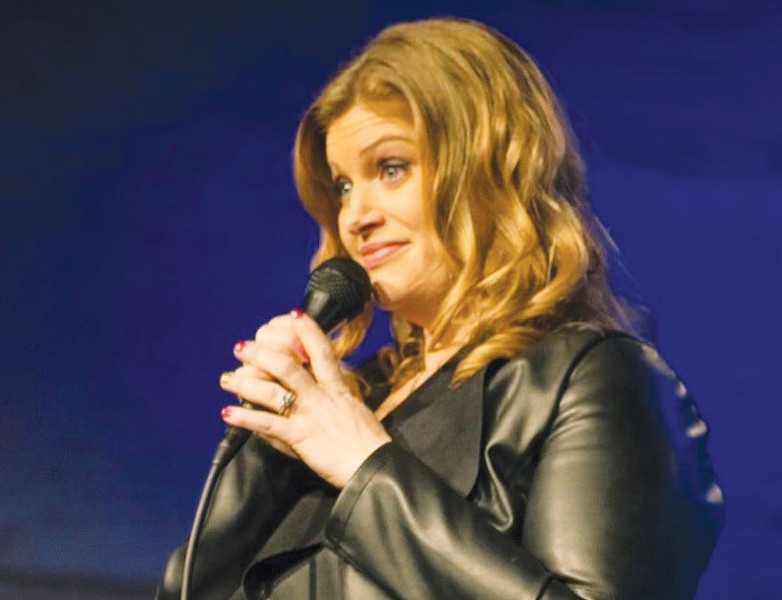 Comedian Gina Stahl-Haven gets heckled a lot, but not so much at the comedy clubs as in her college classroom. She laughs, "My students are hecklers and I have to respond to them."

It turns out, working as a professor prepared the new comedian for standup more than she expected.

"I'm literally standing in front of 30 people in the classroom doing a bit," she says. "It's got my lecture in there but there are jokes and I'm responding to the group and that's my job, so in a way, I have been professionally performing for the past 15 years."

The rising star's straight-talking humor reminds you of your funniest girlfriend, and she gives motherhood and relationships her signature treatment—sarcastic but not self-deprecating, celebrating the experience of being a woman but acknowledging the laugh-so-you-don't-cry moments.

Stahl-Haven, a Novato native and instructor at Santa Rosa Junior College, won the exclusive San Francisco Comedy Competition last year when no one had heard of her, but was later told there was an error, and she'd actually won second place.

"I still have a lot of questions about what happened," she says.

Stahl-Haven moved on from that disappointment, but it reinforced her feelings about women in comedy.

"I think women are funny, and we should open the space for more diverse types of comedy," she says. "There's a lot of misogyny in comedy, even though there's a lot of people who are trying to change that in the scene."

"I really loved it and thought I was good at it, but it was just so scary," she says.

She continued improv but kept standup comedy on the back burner. Meanwhile, she became a professor of rhetoric at the University of San Francisco, also teaching at College of Marin and Santa Rosa Junior College, while living in Novato with her husband and two kids.

"Then all of a sudden I'm 37 years old and I'm like, 'Being afraid to do comedy is not a good reason to not do comedy,' and I opened my mind to the possibility of doing it without a direct path," she says.

She looked for opportunities, even though it was still scary—maybe even scarier—than before and soon had gigs throughout the Bay Area. After about a year, she entered the San Francisco Comedy Competition as a long shot. But she did get in, and winning/not winning was life-changing.

"That experience built a lot of opportunity, and helped me build some confidence and see my place in the scene," she says.

With a young family and an existing career, it's not always easy.

"It's hard to balance it all—there are festivals I want to apply to and I'm just like, 'What? Do I miss a week of work? Do I take the kids with me?'" she says. "There's a challenge with it—we just went to Seattle and I took everyone with me and we made it a vacation. Every night I'd leave for a show, and even though everyone knew that was why we were going, it was, 'No, mama—have dinner with us.' I'd leave for the shows feeling so guilty—one night I was getting into the Lyft and my son was lying on the concrete screaming, 'Mama, no go!'"

The upside is that there is a lot of comedic material when you're a mom. Her authentic humor resonates—especially with women.

"I hear people say, 'I'm not against women in comedy, I just don't find it funny,' and that's a much bigger discussion about social issues, which is, 'Why is the experience of women so foreign that you don't relate to it?' Because comedy is about relating to things, right?"

It's a question a rhetoric professor might ask, and a question a mother would feel is important, but the comic in Stahl-Haven would say it's her direct experience. People come up after the show, and actually express surprise that they liked her.

"They'll say, 'You were so hilarious, and my husband does not like women comics, but he liked you.' Like women, in general, aren't funny."

But maybe it's that women comics just aren't in the scene. A study done by producer and comedian Meredith Katchel revealed that venues book male comics more frequently than female comics, and it's even more true of less-frequent performers (a 70 percent male-29 percent female ratio).

Questioning biases is important to inclusivity.

"I would just say to people: what you think is comedy, might not be the only comedy," Stahl-Haven says. "When somebody has this kind of response, and they don't question 'Why do I feel uncomfortable?' then they continue having that implicit bias."

No woman has ever won the San Francisco comedy competition. But Stahl-Haven is in good company anyway. The last woman to win second place? Ellen Degeneres, 34 years ago.