What's next at Lawson's Landing resort now that the vacation trailers are gone? 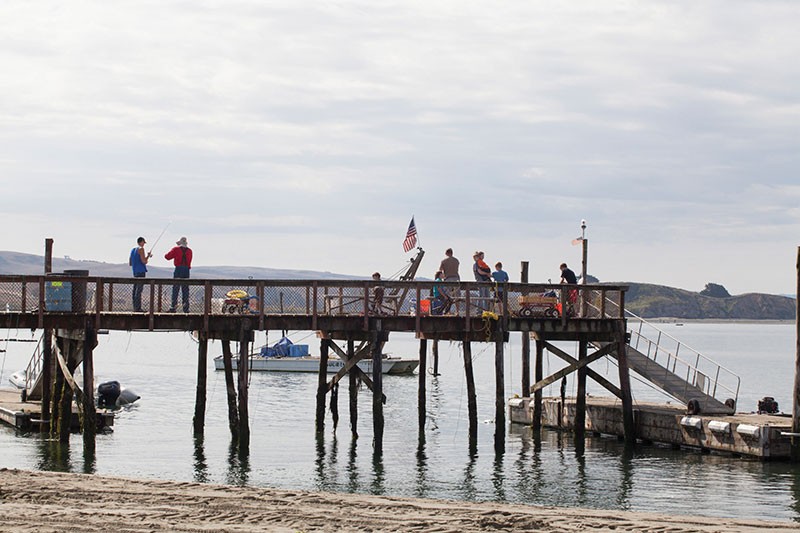 The old funky trailers got the boot at Lawson's Landing after a years-long process finally played out to its conclusion on July 13. The removal of the trailers is part of a deal between the campground and the California Coastal Commission designed to keep the Dillon Beach facility in business while it makes some upgrades.

But now the question is whether the popular facility can survive long enough to stay in business and meet requirements of the Coastal Commission to bring it into compliance with the demands Lawson's agreed to—while also figuring out how to make up the rental income that's up in smoke now that the 200-plus rental trailers are gone.

In some ways Lawson's Landing is an outlier among typical land-use issues tackled by the commission. Even in the absence of permits, the compound had been operating for decades within the spirit of the Coastal Act proviso to keep beach access affordable to all Californians.

The trailers were one manifestation of the 1976 Coastal Act's for-the-people emphasis, but critics and environmental groups said the setup gave unfair access to those who had the trailers, which were plopped on lots that rented for between $400 and $500 a month on a piece of land that is frankly a developer's dream: Lawson's Landing is located near the mouth of Tomales Bay, where it spills out into Bodega Bay. It's a popular and glorious destination for fishers, crabbers, campers and day-tripping tourists, and has traditionally been the cooling-off destination of choice for working-class people, historically dominated by coast lovers from the Sacramento area.

As the mandated removal and associated upgrades have rolled out, Lawson's has said it wants to repopulate the land vacated by the semi-permanent trailers with other, more luxe trailers-on-wheels that would help keep Lawson's in business. The family plans to expand tent-camping opportunities as part of an upgrade to the campground—which also includes building a new wastewater system—but those sites don't provide nearly the income as the steady monthly rents that flowed from the trailers.

Tom Flynn is Lawson's Landing representative on a five-person scientific panel studying the facility's proposals to upgrade the campground. He says the campground will ask the Coastal Commission to drop a two-weeks-maximum camping restriction, a request that would have to be offered as an amendment to the agreement Lawson's is currently operating under. That has yet to happen.

"They've removed all the trailers, and we're trying to get the scientific survey processed," says Flynn. That will clear the way to make improvements in the areas where the trailers have been removed, and elsewhere in the 30-acre area of the property that's been used for camping. "They are seeking some longer term income, potentially three-month leases so they are assured some ongoing revenue," Flynn says.

As part of the arrangement with the Coastal Commission, Lawson's has been granted permission to build-out a section of property to accommodate more tent camping. The trade-off is the accommodation of higher-end campers to replace the funky ones.

Steve Kinsey, the outgoing Marin County Supervisor from the 4th District, and chair of the Coastal Commission, encouraged the commission's acting executive director, John Ainsworth, to visit Lawson's to get an on-the-ground perspective of the facilities. Flynn says that visit is scheduled for July 22.

Ainsworth was elevated to his post after the controversial firing of Charles Lester earlier this year, a move prompted in part by developers' frustration with the commission's slow-roll approval process for coastline development. The Lester contretemps went on for months before he was finally ousted, and Flynn says the battle over Lester didn't help Lawson's cause.

"For really the past year we've been bringing this up," Flynn says. "Lawson's needs an extension. Then the upheaval happened with Lester being removed. The fact is, Lawson's is way down on the Coastal Commission's priority list because it really isn't an environmental threat, it's not something that they've had to really worry about."

Kinsey will leave his chairman's post at the conclusion of his final term as Marin supervisor; he didn't run for reelection this year and his chairmanship is contingent on his being an elected official. Kinsey's district includes the Lawson's property located in far northwestern Marin County, and he believes that the Coastal Commission "didn't give its full attention to the great benefit of Lawson's" when it comes to the site's for-the-people mandate. He encouraged Ainsworth to go see for himself how cool it is.

As a boom-state rush to develop the California coastline continues, Kinsey notes that Lawson's has continued to provide beach access at an affordable rate. And as Lawson's long-unpermitted operation came into the cross-hairs of environmental groups like the West Marin Environmental Action Committee, Kinsey was at first supportive of keeping the long-term trailers in place.

But, as Flynn recounts, the family decided to not press that issue and agreed to remove the trailers, figuring they'd be able to make up some of the lost income with shorter-term rentals of the spaces to big expensive campers on wheels.

"All they are asking for in terms of an extension is the ability to let people stay more than two weeks at a time," Flynn says. "They are seeking some longer term income, potentially up to three-month leases so they are assured of some ongoing revenues." He notes that this new requirement on Lawson's doesn't apply to properties up and down the coast, "where people have apartments, condos, time shares," and can stay in them for as long as they'd like.

The Lawson's rep says the campsite will eke it out this year but needs to figure out how to replace the departed rental income. "I think they can get through this year, but it's really a matter of the next couple of years," Flynn says, "putting in the new wastewater system, all new utilities, putting in restrooms—a lot of things that are required by the permit but also improvements that they want to make."