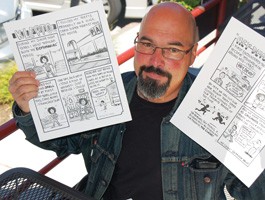 
Even as cartoonists like Ghost World's Daniel Clowes have exploded and expanded cartooning's artistic possibilities, comics still tend to be considered a lowbrow art form—or something strictly for kids. How often do hand-illustrated panels appears next to Picassos and Monets on museum walls?

"We're still at the back of the bus," explains Jaime Crespo, curator of "Four Mexicans and a White Girl Walk into a Gallery," opening May 6 in Point Reyes. "Cartooning is a viable art form, and it's celebrated in practically every country in the world—but here."

Raising funds for West Marin community radio station KWMR, the show's featured artists—Gabrielle Gamboa, Javier Hernandez, Janelle Hessig and Crespo (Isis Rodriguez had to drop out due to scheduling conflicts)—all hail from the underground comic world. Gamboa's illustrations have been published in Bust magazine and the San Francisco Bay Guardian. Javier Hernandez has his own imprint Los Comex, with his most well-known creation El Muerte, and Crespo himself is a six-year contributor to the Bohemian with the strip Slice.

Hessig, the "white girl" in the title, has the distinction of not only being name-checked in songs by Born Against and Bratmobile ("The Real Janelle"), but for Tales of Blarg, a comic zine detailing Hessig's adventures as a dumpster-diving, drunk, barfing punk rocker in the '90s, which she continues to publish, albeit infrequently. In January of this year, she edited Maximum RockNRoll's punk comics issue.

"I'm not really a gallery person," says Hessig on the phone from the East Bay. "I've always worked within self-publishing, so there's a bit of distance between me and whoever is looking at my stuff. I'm not used to the formality of gallery shows." Hessig will show mostly single-panel story pieces. "It's all pretty loose. There's a lot of humor involved," she says.

Crespo reiterates Hessig's ambivalence when it comes to galleries. "I still feel more comfortable with self-publishing, just putting them out there, and moving on to the next thing," he says. "But I go to a lot of art shows, and I thought, 'Well, gee whiz, why are we still marginalized?'"

Speaking of marginalized, how did Crespo respond to concerns from at least one Latino artist, whose open studio was scheduled to share the gallery on the same night, that the title "Four Mexicans and a White Girl" constitutes racial stereotyping? "I told him, 'Dude, you realize that Mexican is an ethnicity?' It's not slang. It's not a derogatory term," explains Crespo. Instead, Crespo, who took to skateboarding and music as a teenager, says the meshing of races, cultures and art forms, is cause for excitement.

"I wanted cartoonists there," he says, "I feel that these people are really important artists, not just cartoonists, but artists with something to say."