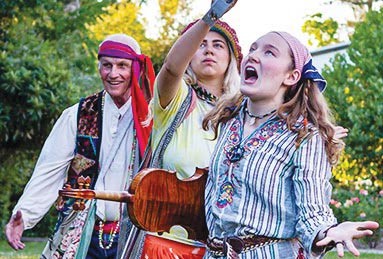 Summer used to be the season for Shakespeare al fresco, but with the shuttering of the Shakespeare in the Cannery Program last year it seems to be in shorter supply these days. Still, interested patrons can find a couple of shows at opposite ends of the North Bay to satiate their seasonal appetite for the Bard.

Mill Valley's Curtain Theatre will present The Merry Wives of Windsor in mid-August and the Marin Shakespeare Company will close their 30th season in September with A Midsummer Night's Dream. Healdsburg's Raven Players are in the middle of their run of As You Like It.

Probably best known for the monologue that begins with "All the world's a stage, and all the men and women merely players," there's so much going on in As You Like It as to make it almost impossible to summarize. Suffice it to say it contains the usual Shakespeare plot devices of feuding dukes, sibling rivalries, disguises, cross-dressing, mistaken identity and young love. Add wrestling, sheep herding and a melancholy malcontent to the mix and, hey—you've got a show.

Director Steven David Martin has set the production during the '67 Summer of Love, which means its cast is attired in bell bottoms, beads and bandanas, and its scenes are bridged by some of the '60s best-known musical hits. Healdsburg's tiny West Plaza Park (really just a patch of grass between the Bear Republic Brewing Company and a municipal parking lot) fills in for the Forest of Arden, where much of the play's action takes place.

There's no set to speak of (just a single backdrop), and the large cast is often in a losing battle for vocal superiority with the nearby, raucous brewpub-patio crowd, but they're an energetic group doing their best to bring a little theatre to their hometown audience. The play is actually a co-production with the city of Healdsburg and kudos to them for supporting the performing arts.

The cast is peppered with some North Bay stalwarts as well as some new faces. Azulito Bernal, as Orlando, and Grace Reid, as Rosalind, are charming leads. Athena Gundlach's "Jaques" gets most of the good lines, while Hande Gokbas steals every scene she's in as the put-upon and infatuated Phoebe.

Ask audience members at the conclusion of the show what it was about and they might shrug their shoulders. Ask if they had a good time and I suspect they will enthusiastically nod their heads in the affirmative.