4/20 concerts appeal to all tastes 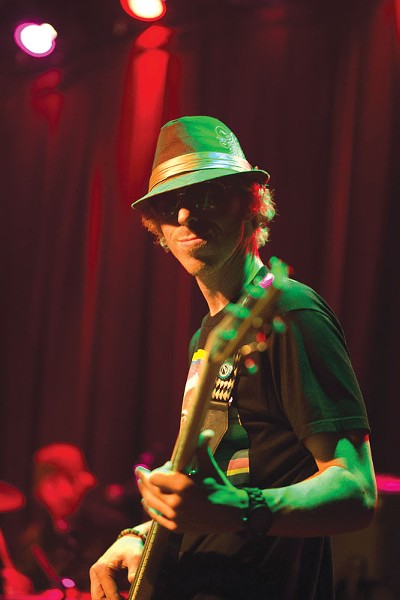 Cannabis' big day, 4/20, falls on a Friday night the first year that recreational marijuana use is legal in California. That means there will be a party everywhere you look this weekend, including a surplus of 4/20 concerts of all genres happening in the North Bay.

With reggae essentially the official music of cannabis, Sonoma County's Pacific Soundrise act as this year's ambassadors of 4/20, headlining a show at HopMonk Tavern in Sebastopol.

Made up of twin brothers Spencer and Shaun Read on drums and bass, with Charles Hurley (Herb in Movement) and Skip Hill (Bellyfull) splitting guitar and vocals, the band will play a mix of classic and modern reggae with support from Occidental artist CIVILIANSOUND! and San Francisco's Stu Tails.

In Santa Rosa, the folks at Guitar Player magazine are turning 4/20 into a chance for fundraising by hosting the Play It Forward benefit concert at the Luther Burbank Center for the Arts. Along with raising money and giving away guitars to musicians affected by last October's fires, Play It Forward features a rare live performance from Police guitarist Andy Summers and several other acclaimed musicians.

Punk-rock stoners will be sure to pop over to the Phoenix Theater in Petaluma this 4/20 for another fire-relief benefit featuring longtime pop-punk favorites Tsunami Bomb, the Phenomenauts and others.

Originally formed in Petaluma in 1998, Tsunami Bomb toured worldwide before disbanding in 2005, though the band revamped in 2015 and still features their signature dueling female vocals and energetic live sets.

Over in Sonoma, folksy stoners will want to take in the self-described "rockadelia" of roots-rock band Achilles Wheel, who play a 4/20 show with acclaimed Americana performer Keith Greeninger at the Reel Fish Shop & Grill. Achilles Wheel will show off new songs from their latest album, Sanctuary.

Music lovers who want to put a little pep in their step this 4/20 should head over to the Mystic Theatre in Petaluma for a fiery performance from Portland, Oregon's genre-defying MarchFourth Marching Band, with local alt-folk band Oddjob Ensemble opening the night. Made up of some 20 brassy, jazzy, funky musicians from all walks of life, MarchFourth has been compared to Cirque du Soleil.

For those looking to lounge this 4/20, Napa's Blue Note Jazz Club is hosting popular swinging soul outfit Royal Jelly Jive, who will record a live album during four shows played over two nights in the intimate club.

For a complete list of shows, see Music calendar, p22.