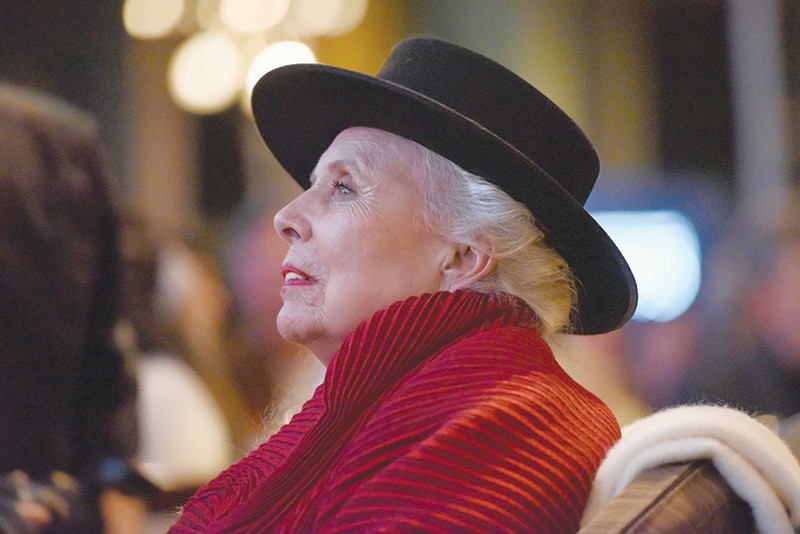 When Bob Dylan won the Nobel Prize for literature in 2016, the news was greeted by some with the retort that, if the Swedes were going to go in that direction, they should have given the prize to Joni Mitchell.

It would have been both a smart choice and a sentimental one, given the premature report of Joni's death to a brain aneurysm in 2015. In recent years, she's suffered other maladies. The cigs caught up with that crystalline voice, and a mysterious skin condition made her shun daylight.

Yet the party for her in Joni 75: A Birthday Celebration shows both the range of her music and the affection that the world of music has for her.

The concert film compiles a two-night-long show last November at the Dorothy Chandler Pavilion in Los Angeles, the city she analyzed in verse for years.

Not everyone gets Joni Mitchell: the strange guitar tunings, the high blue yodel or the throaty intimacy of her confessional mode. Writing about Mitchell, who was one of only two female performers in 1978's Last Waltz, Roger Ebert said that he didn't know what her song "Coyote" was supposed to be about. (It's easy: it's about Sam Shepard, or somebody like him.)

While Mitchell's modes changed, from lissome folkie to thick-skinned blueswoman to jazz artist, one point stayed as constant as a northern star: both in age and in youth, Mitchell insisted on a woman's privilege of traveling alone, sleeping with whom she pleased and holding firm to independence.

Lyrically, Mitchell's viewpoint changed from hippie naiveté to embittered realist. If once she thought people were made of stardust, she came to fear they're all just meat in a dog-eat-dog world, where "sex sells everything / and sex kills." Always in her songs are diagrams of traps waiting for women. One side is the grim one-night-stand in "Down to You"; the other is a different kind of discontent in "Harry's House/Centerpiece." There, Mitchell imagines the Scarsdale angst that could have been hers, lolling around waiting for the husband to return from the indelible cityscape she painted ("A helicopter lands on the Pan Am roof / like a dragonfly on a tomb").

The concert is something for any Mitchell fan, from tricky jazz to the kind of crowd-pleasing material that any semi-competent street busker can make sound good. Glen Hansard, whose busking style was visible in the movie Once, does "Coyote" here. (Maybe the sainted Ebert would have understood the lyrics if a man sang them?)

Graham Nash sings "Our House," about the Laurel Canyon place he and Joni shared once upon a time. Mitchell's fellow Canadian Diana Krall covers perhaps the bleakest song Mitchell ever did, "Amelia," about a woman's search for freedom, what it costs and what it's worth. James Taylor and Seal collaborate on a tune I cannot abide, "Woodstock"; if it seems particularly airy-fairy, remember that Mitchell actually didn't play the Woodstock fest.

The vocally craggy Kris Kristofferson takes on "A Case of You" with Brandi Carlile, right before Carlile solos to cover "Down to You," a startling sound-alike version of a very complicated song. Emmylou Harris (the other woman in The Last Waltz) covers Mitchell's terrifying slide-guitar lament about heroin, "Cold Blue Steel and Sweet Fire." Los Lobos perform the obscure but fine "Nothing Can Be Done." The congas in the original must have attracted the Wolves.

Making a rare appearance, but not joining in on the music, is Mitchell herself. Buffeted by the years, she's still everything Chaka Khan calls her here: a lifesaver.