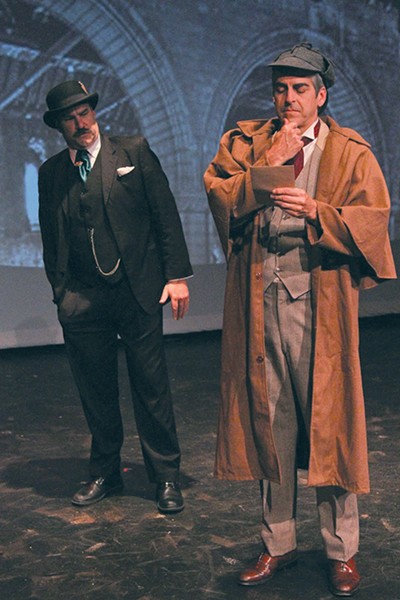 Baskerville, a Sherlock Holmes Mystery (Spreckels Theater Company) is Ken Ludwig's spoofy take on Arthur Conan Doyle's Hound of the Baskervilles. Raven Players' Sweeney Todd: The Demon Barber of Fleet Street follows a vengeful ex-convict teaming up with a pie-maker for a cannibalistic killing spree. Surprisingly, the livelier of the two is not the show with slashing razors; it's the one where a guy gets mauled by a big stuffed dog.

Baskerville, directed by David Yen (with obvious affection for Monty Python), follows Sherlock Holmes (Steve Cannon) and Watson (a marvelous Chris Schloemp) as they take the case of a man killed by a mysterious beast. The play is jam-packed with pratfalls, outrageous accents, silly walks—and a massive cloud of machine-made fog that seems to have a mind of its own.

Though Cannon's ultra-dry delivery as Holmes reads mostly as lifeless and unfunny, the rest of the cast is a brisk and bouncy delight, especially Larry Williams, excelling in an array of hilariously over-the-top roles. Kim Williams and Zane Walters do exceptional work as numerous potential murderers and/or victims. The best performance of the show, though—thanks to Williams' utter commitment to the moment—is from the floppy stuffed-animal appearing as the mysterious hound itself. Rarely has an inanimate object been funnier.

If only Sweeney Todd had the same level of energy.

Though it features one of the best orchestras I've heard in the North Bay—with expert musical direction from Lucas Sherman—Steven Sondheim's spirited, darkly fun tale feels disappointingly dour. Directed by Carl Hamilton (who delivered one of 2015's best shows in All My Sons), this Sweeney suffers a mortal blow from stiff staging that, despite several nice visual touches (loved the falling red fabric when key characters die), often feels flat, leaving the actors looking constrained and frozen. A bit more melodramatic vitality and dynamism is called for in this kind of show.

As Todd, Matt Witthaus cuts a fine figure, and reveals a powerful singing voice, but the larger-than-life intensity of presence for which he's become known is rarely capitalized on. Far more lively and on-the-mark is Tika Moon as the pie-making Mrs. Lovett, balancing her characters' dark humor and comic tragedy with masterful ingenuity. ★★★

For dates and times for 'Baskerville,' visit ci.rohnert-park.ca.us; for 'Sweeney Todd,' check raventheater.org.