Thanks to the drought, marine bioluminescence is more common in local waters 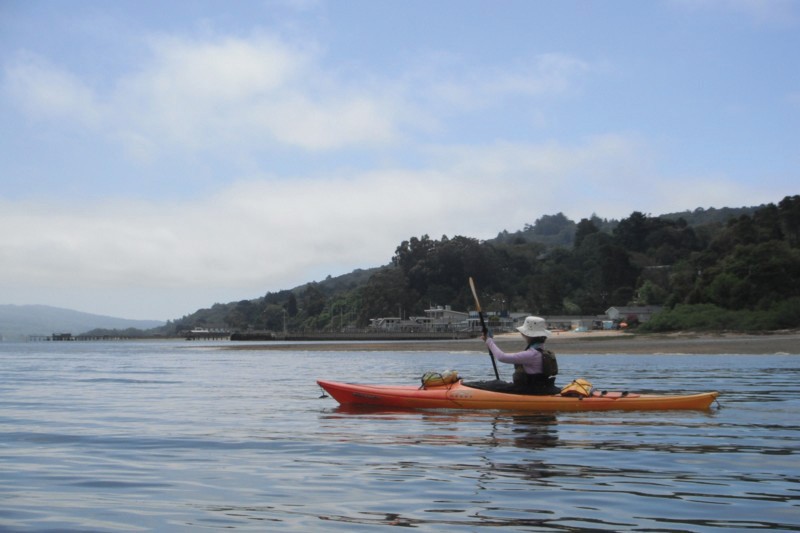 Tomales Bay is calm as our kayaks head swiftly and silently northward toward the mouth of the bay. It's about 10pm on a moonless and cloudless night in July, and we three kayakers hug the shore as we paddle in the dark, in search of the seasonal nocturnal light show—marine bioluminescence.

Disturbing the water as we paddle, we begin to see a whitish-blue glow, as if the paddle has somehow become lit. Looking to the rear of my kayak, I see that the wake from my boat is also glowing and luminous. We come around a point to a particularly dark bay with almost no ambient light pollution, and then the show begins in earnest.

"Look at the kelp!" I shout to my paddling buddies. "It looks like rope-lights."

We look into the sea below and see many luminous light trails from small darting fish. As we paddle on, a large fish leaves a broad trail of light about three feet down below us. Further on, a school of small fish looks like a submerged, glowing cloud.

A tiny organism called a dinoflagellate is responsible for the bioluminescence. This single-celled phytoplankton is found in marine environments throughout the world, with population sizes varying seasonally as a result of the effects of water temperature, salinity and depth. Given predicted weather patterns and location, there are certain times of the year in most ocean environments when one can reliably expect to find spectacular bioluminescence. There are some locations worldwide where ocean conditions consistently promote dinoflagellate growth, such as Puerto Rico's Mosquito Bay.

In Northern California, in a typical year of average weather conditions, July-September are the best times to view bioluminescence. Given the unusual weather patterns that have generated our current drought, local outfitters such as Blue Waters Kayaks in Marin are finding bioluminescence present almost year-round.

Bioluminescence is not only beautiful to behold—it's almost a spiritual experience—it has also come to be regarded as a very useful tool in a wide variety of contemporary scientific research communities. In 2008, the Nobel prize in chemistry went to two U.S. scientists and a U.S.-based Japanese researcher for discovering and developing a glowing green protein called green fluorescent protein (GFP), the source of bioluminescence in some jellyfish.

In most of the vast volume of the ocean, bioluminescence is the primary source of light. Terrestrially, fireflies are the most commonly observed source of bioluminescence. So while relatively common in nature, it is relatively uncommon to find a northern California resident who has actually experienced it along the Marin or Sonoma coast.