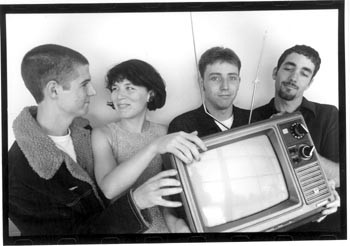 It's a happening: Little Tin Frog tune into the Velvet Underground on Oct. 16.

IT'S GOOD TO KNOW that there are some things in life you can depend on. Case in point: the inane nature of pop culture. For instance, there's now an entire website devoted to the banana that graced the Andy Warhol-designed album cover of the Velvet Underground's first LP. You get not only the original cover art cybernetically enhanced to allow the user to peel the banana (oooh la la!), but also a function that permits you to gaze upon this pink splendor in mid-peel.

And that's not all!

Little did Rolling Stone know a few years back, when it declared the Velvet Underground to be the most influential band of the past 20 years, that a whole new medium would evolve to carry the torch--albeit in a decidedly goofy fashion.

As for the band's musical influence, that's very much in evidence as the millennium ebbs--or flows, or whatever. The resonance of the Velvet's distorted folk-rock rhythms and street level lyrics--an amalgam of Lou Reed, John Cale, Moe Tucker, and Sterling Morrison--spiked with references to drug experimentation and sexual abandon, can be heard in the music of David Bowie, R.E.M. (who covered a couple of Velvet Underground songs on their Dead Letter Office CD), Sonic Youth, Yo Lo Tango, Galaxy 500, Luna, Television, Bauhaus, the Jesus & Mary Chain . . . and the list goes on.

Local alt-rockers Little Tin Frog not only worship at the proverbial shrine of the Velvets, they're gonna actually build a shrine in their honor.

On Oct. 16, the Petaluma-based band will host a tribute to the quintessential New York art-rock group, transforming the rustic Inn of the Beginning into a replica of "The Exploding Plastic Inevitable," a 1966 art happening hosted by Velvet's mentor and pop artist Andy Warhol.

"We initially came up with the idea as a way to draw people with an interest in alternative music into coming out to see local bands for the first time," says event organizer Owen Otto of Little Tin Frog. "We chose the Velvet Underground over a lot of more popular bands because they were hugely influential and embodied the ideas of musical integrity in rock."

The Velvet Underground tribute will be held Saturday, Oct. 16, at 8 p.m. Inn of the Beginning, 8201 Old Redwood Hwy., Cotati. Tickets are $7 at the door, $5 in advance, and are available at Red Devil Records in Petaluma, the Last Record Store in Santa Rosa, and Zone Music in Cotati.

From the September 30-October 6, 1999 issue of the Sonoma County Independent.