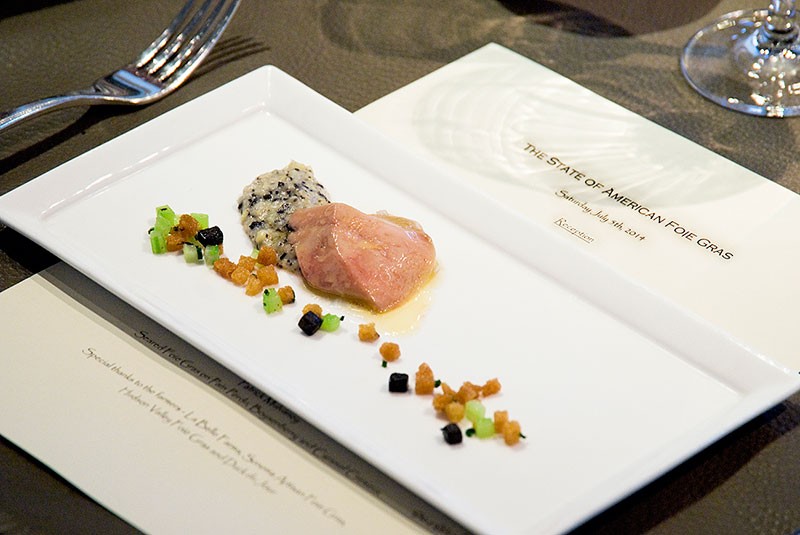 In the annals of civil disobedience, the lunch on July 5 at La Toque in Napa surely ranks as one of the most delicious—if you like eating fattened duck liver, that is.

Executive chef Ken Frank offered a free, six-course meal at his Michelin one star restaurant. The catch? Diners had to submit a 100-word post on La Toque's Facebook page on the topic "Why California's foie gras ban is foolish."

More than 200 people submitted entries. The lunch, dubbed the "State of American Foie Gras," was part marketing stunt and part protest. July marks the second anniversary of California's ban on foie gras, SB 1520. The law prohibits "force feed[ing of] a bird for the purpose of enlarging the bird's liver beyond normal size" and the sale of foie gras in the state. But it can be given away and imported.

Frank is an outspoken critic of the ban, which he variously calls "stupid," "unenforceable" and "unfair." Joining Frank in the kitchen were five fellow chefs and comrades-in-arms: Patrick Mulvaney of Mulvaney's Building & Loan in Sacramento, David Bazirgan of San Francisco's Dirty Habit, Douglas Keane, former executive chef at Cyrus and owner of the Healdsburg Bar & Grill, Victor Scargle of Yountville's Lucy and Mark Dommen of One Market in San Francisco.

Instead of banning foie gras, Frank said California could lead the way in creating ethical standards for foie gras production. Foie gras is produced by force-feeding ducks through a tube to enlarge their livers.

While guests were mingling, waiters passed tiny duck sausages served on equally petite hot dog buns and a black tea shrub topped with foie gras foam. Once seated, a succession of dishes came out the kitchen that featured foie gras as the star ingredient. Chef Keane served an impossibly rich and creamy parfait of foie gras with a cherry blossom gelée for the first course. The standout for me came a few dishes later: Dommen's seared foie gras in a light, but deeply delicious duck-dashi consommé.

Duck de Jour, Sonoma Artisan, Hudson Valley Foie Gras and La Belle donated the duck livers and duck. In order to avoid any appearances of selling foie gras, nothing was available for purchase, including the restaurant's vast selection of wine. Instead, guests brought their own wine and shared glasses of Sauterne, Pinot Gris, sparking wine and other foie-friendly wines. The free-flowing food and wine made for an over-the-top lunch.

So what is the state of American foie gras? The industry appears to be thriving everywhere except in California, but opponents of the ban have been unsuccessful in overturning it. Last August, the 9th Circuit Court of Appeals unanimously upheld a district judge's refusal to block the law. And the two sides of the debate are sticking by their positions.

Bruce Friedrich, senior policy director for Farm Sanctuary, a national animal rights group that helped enact the ban, called the lunch "a temper tantrum by chefs who are behaving like babies." He believes there is no way to humanely produce foie gras: "It's simply not possible to force an animal's liver to expand by 1,000 percent without the animal being in agony."

Critics of the ban say ducks and geese naturally gorge themselves and grow their livers in advance of migratory journeys.

"There is no good case that these ducks are mistreated," says Frank. "We will continue to protest to keep foie gras alive."