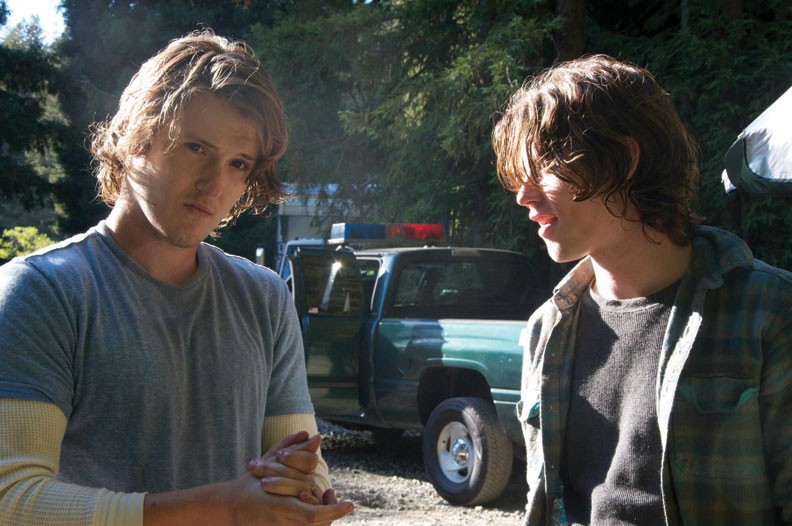 In Deep Dark Canyon, a modern shoot-'em-up set in Guerneville, two young brothers, wanted for murder, are on the run from the sheriff. The twist is that their own father, Bloom Towne (Ted Levine), is the police chief, and the dead man was the town's mayor. Skylar (Nick Eversman) and his brother, Nate (Spencer Treat Clark), have an idea to flee to Canada, but a redneck posse—and their own father—are on their trail.

Deep Dark Canyon was made by husband-and-wife team Abe Levy and Silver Tree. Tree, raised in Petaluma, co-wrote the indie film The Aviary (2005); Levy is a long-time editor and director. The cast is competent, and there's economy in the way a car crash is shot from within the back of a van, or the way a model helicopter is brushed past the camera just fast enough to register the image.

But this is another indie film that makes you wish membership in the Writers Guild of America came with a course in gun safety. The two fugitives—policeman's sons who likely know a little bit about firearms—try to shoot off the chain of their handcuffs with an M16 rifle. Combine that with the scenes of local yokels drinking beer and playing the William Tell game, and you get an increased sense of this film's distance from the people who live in this area.

Deep Dark Canyon has two factors in its favor. One is Levine, the Ed Gein–like "Buffalo Bill" in Silence of the Lambs. Levine's reading of a line like "There are a lot of men out there" has a bottomless weariness and authenticity. The second factor is the land itself. Play spot-the-location when Pat's and the Rio Theater turn up, while admiring the gorgeous footage of the foggy river, the redwood slopes and the old bridges. Usually, film crews head for Washington state to get this type of ambiance, but it photographs ever so much better here. Ironically, the plot about the boys' plan to flee to Canada probably would have made more sense in Washington.