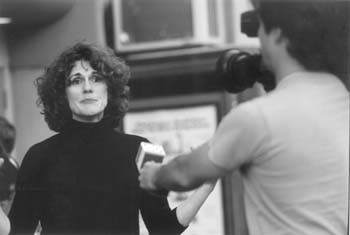 In the limelight: Newly appointed county Film Commissioner Catherine De Prima took time out at a recent benefit screening on Mumford to talk to the press. The film, some of which was shot in and around Petaluma, is the only big-budget Hollywood to use Sonoma County settings in the past two years.

Has Sonoma County's Hollywood reputation recovered from the 'Scream' debacle?

IF CATHERINE DE PRIMA ever had stars in her eyes--of the big, glittery, Hollywood variety--those stars are long gone by now. In her role as Sonoma County's newest film commissioner, on the job since February of last year, the former actress and model admits that now she sees only the warm green glow of dollar signs.

Lots and lots of dollar signs.

Of course, that's her job. De Prima's primary mission is to attract as many of those dollar signs as possible by enticing the film and television industry into bringing its big budget productions to the rolling hills and picturesque towns of Sonoma County. Small films are welcome too, of course, as are the bread-and-butter car commercials--a steady business, mainly filmed on the winding roads near the coast--and the random magazine photo shoot.

But according to some observers, the whole Sonoma County film biz is in serious need of a good shot in the arm following a series of high-profile setbacks, including an alleged anti-Santa Rosa blacklist initiated by horror-movie director Wes Craven after the eruption of a local firestorm of controversy over his filming of Scream.

Though exact numbers are hard to come by, one thing seems clear: With no major productions in town since Mumford wrapped 17 months ago, the county is not enjoying the same degree of cinematic popularity it once did. (See sidebar, next page.)

That's a trend that De Prima, who took over from longtime Commissioner Sheree Green, is working to turn around--though the first thing she'd like to change is the perception that Sonoma is suffering any serious decline.

"We have constant production here," she says with an easygoing laugh, displaying a stack of location requests, mainly commercials, that she's been processing in her one-woman office in Santa Rosa. "I'm kept totally busy," she says. "We have requests from Hollywood all the time."

THE SONOMA COUNTY film commissioner's office, first established in 1974, is a subdivision of the Sonoma County Economic Development Board. (Most California counties, and several large cities, maintain such film-friendly offices--which is an indicator of just how important Hollywood can be to a region's bottom line.) The commission has moved around a bit; until 1998 it operated out of the Sonoma Convention and Visitors Bureau.

Working in loose alliance with the Pete Wilson-appointed California Film Commission, De Prima is responsible for issuing film permits, maintaining a database of available location sites, and acting as a liaison between producers and the community. She prepares brochures and invitation packages for producers, scouts locations, and attends filmmaker expos.

Stationed at the door of the Raven, De Prima began the evening by enthusiastically distributing little packages of complimentary mints and invitations to property owners, enticing them to file their homes and barnyards with the movie-site database. Later, De Prima took the stage to thank the community for welcoming Mumford, and its crew, to Sonoma County.

"I know sometimes it's bothersome to be driving down the street and run into a movie production, holding up traffic," she exclaimed, working the crowd like a stand-up comic or a seasoned cheerleader. "But if you think about the big picture, you know that it's good for Sonoma County to have those film crews there in the street."

The crowd agreed, cheering in approval.

"Generally," De Prima explains later, in her office, "it's my job to make things as easy as possible for everyone involved--the producers and the community."

Things weren't so easy in the spring of 1996, when Wes Craven, director of the Nightmare of Elm Street films, raised an international stink after a run-in with the Santa Rosa School Board. After accepting a verbal contract made by Santa Rosa High School's principal, Mike Panas, Craven set up shop in Santa Rosa to film Scary Movie, the semi-comic gore-fest that was later retitled Scream.

In a fiery snafu that immediately became a kind of modern film-industry legend, Craven, who had intended to shoot several days at Santa Rosa High School, was thrown into his own personal "Nightmare on Mendocino Avenue" when permission to film was denied. Shortly before on-campus shooting was to begin, the school district's governing board took a look at the script--and balked mightily at its gleeful depiction of promiscuous, foul-mouthed teenagers, most of whom are gutted like fish before the closing credits.

It was in those end credits that Craven got his final digs in at the school board, which voted to ban Craven from the school in spite of the director's threat of a lawsuit and his promise to blacklist Sonoma County when he returned to Hollywood.

In those aforementioned credits, after thanking numerous people--including Sheree Green, who fought hard for Craven and managed to snag the Sonoma Community Center as a replacement site--the final credit reads, "No thanks whatsoever to the Santa Rosa City School District Governing Board."

The whole incident sparked a massive local debate over free speech and responsible commerce and was widely reported in movie magazines around the world. Another, similar conflict had only just taken place in Petaluma, where the Downtown Association had drawn up stiff, somewhat punitive rules for filmmakers after Lolita shut down Petaluma Boulevard, affecting the revenues of local merchants.

The California Film Commission stepped in, warning Sonoma County that its "film unfriendly" actions might have alienated the industry for good.

"I think it was publicity," says De Prima now of the Scream incident. "And it wasn't necessarily negative. Because of the controversy, a lot of people heard about Santa Rosa that never would have otherwise."

Though she's admits she hasn't spoken directly to the school board about Cravens' big-screen remark, she says she's heard that some members of the board were quite proud of it.

"It showed they stood up for their beliefs," she says.

The question is: Did Wes Craven stick up for his beliefs? After stating publicly that he would get some payback for what was done to him, did he really try to pull any strings in Hollywood, blacklisting Santa Rosa for all time? Or did he simply calm down and forget about the whole thing?

Craven himself is not talking. Calls to his office for comment on the issue were not returned.

But by late 1997, almost two years after Craven and company had left town--and shortly after Scream had become the most successful horror film in history--it appeared to many that a backlash had occurred.

"There had been a lot of film activity in Sonoma County," says Audrey Grace, of Santa Rosa's Panda Talent Agency, a major provider of extras for movie productions. "Then there was a downswing, and there's been almost no upswing since."

Vicki Lima agrees. She's the owner of Cars for the Stars and Lima's Relics, which provide "picture cars" and drivers for film production around the Bay Area. She worked on the Scream production and had expected it to develop into more work down the line.

"We all knew that Wes was making a trilogy," she says, "and that he intended to come back to Sonoma for the other two movies. But when the Board of Education decided to mess around with the First Amendment, it all fell apart."

Not so, says De Prima.

"There is always fluctuation in this business," she shrugs, going on to suggest that any downswing might have been on account of big changes at the film commissioner's office--which first became a part-time position for several months after Green stepped down and then moved from the tourism board to the Economic Development Board.

"Basically," De Prima says, "a lot of people wanting film permits couldn't find us for a while.

"This is show business," she adds, "as in business. If it makes sense to come to Sonoma County, people will come--and no one can make them stay away."

"The idea of there being a blacklist against a particular county is ridiculous," says Dana Harris, a film journalist on staff at the Hollywood Reporter. "Hollywood is money. If a county or a town has a site that a producer wants at the price the producer wants, then no blacklist or bad-mouthing from Wes Craven is going to stop the producer from filming there."

Succinctly surmising that for Craven to issue such threats, "he must have been totally pissed off," Harris adds that such provincial skirmishes are run of the mill in the film world.

"It's a complex industry, and annoying things happen all the time," she says. "When a community does something unfriendly, there may be some gossip or something for the short term, and it might stop some people from filming there, but, believe me, there isn't some master puppeteer distributing blacklists and dictating where people can go to make their films."

Lima and Grace, while insisting that the Craven experience did turn people off of Sonoma County for a time, also point to other factors that have contributed to the current cinematic dry spell (with Touchstone's Mumford as the single recent oasis of hope). According to them, the most significant factor is a Hollywood battle--which broke out shortly after Scream wrapped--pitting film workers' unions, including the Teamsters, against the big Hollywood producers.

"Basically," says Lima, "the cost of shooting in California has gone sky-high, and the producers tried to get the unions to roll back their salaries.

The unions said no, so the muckamucks in L.A. said, 'To heck with California! We're going to Canada.'"

Whatever the reason, as Grace puts it, "We're losing a lot of revenue in California, and certainly in Sonoma County."

It's clear that De Prima has a big job ahead of her, and she knows it.

"We've been making changes," she says, nodding. "We're seeing changes." She rifles through her pile of requests once more. "There is a lot of potential film business, and this office is in a strong position to go out and make it happen.

"In just the last several months, I've heard over and over what a good reputation this office is building," De Prima says.

"I believe Hollywood has confidence in Sonoma County," she concludes with a smile, "because they know that I'm going to help them."