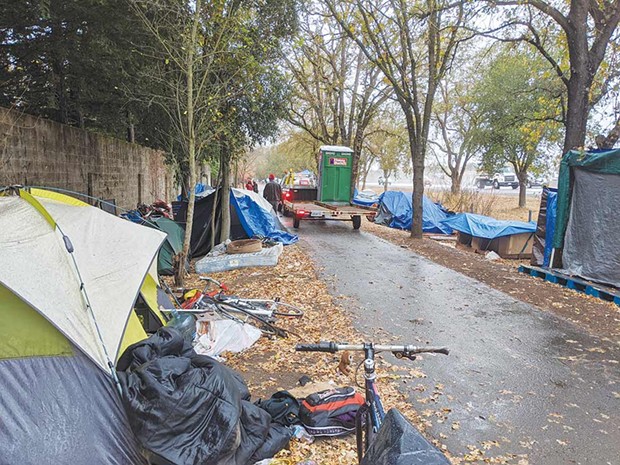 Sonoma County will have one less winter shelter to offer respite to people living on the street through the rainy and cold months this year.

In recent years, the county has contracted with the California Military Guard to offer beds at the armory building behind the Santa Rosa Junior College's main campus between November and March. This year, the state is using the space for another purpose, according to Michael Gause, who leads the Sonoma County Community Development Commission's efforts to house people experiencing homelessness.

One thing is for sure: The loss significantly reduces the number of spaces for people seeking refuge from winter conditions, leaving approximately 100 more people without shelter this winter.

All told, there are an estimated 2,951 people experiencing homelessness in Sonoma County, according to a count conducted by the county in January 2019.

Nearly 2,000 of those people are without shelter, meaning that they are sleeping on the street, in a car or in another improvised structure. The roughly 1,000 sheltered people at the time of the count include those staying in emergency shelters.

The county offers 699 shelter beds year-round. With the addition of 184 winter beds for the next few months, they are offering 883 beds this winter, Gause told the Bohemian.

Permanent supportive housing is not included in the homeless count because the solutions are, hopefully, permanent, according to Gause.

All in all, that leaves about 2,000 without shelter this winter.

A sizable portion of that number have gathered in an encampment along the Joe Rodota Trail on the outskirts of Santa Rosa.

In recent months, dozens of people without homes have gathered in the encampment, which is visible from Highway 12.

For a few reasons, the encampment has garnered a lot of public attention this year. And, although not all of the reactions have been good, the publicity has resulted in an outpouring of support, says Adrienne Lauby, a co-founder of Homeless Action!, a local activist group.

The Sonoma County Bicycle Coalition gathered more than 1,300 signatures calling on the county to "legally and humanely" relocate the residents of the encampment to a "safe, sanctioned location." Meanwhile, members of a new Facebook group, Sonoma County Acts of Kindness, have focused on raising funds and donating goods to those living along the trail.

It all culminated at a Sonoma County Board of Supervisors meeting on Tuesday, Nov. 19. After a lengthy debate, advocates won a concession from the county: Permission from the Parks Department to install temporary toilets for use by residents.

Last week, activists put in eight portable toilets, funded by a range of Sonoma County residents, to serve the encampment, which groups estimate to have more than 150 residents.

This result may not have happened in years past. After the county removed residents of a predecessor encampment from the Joe Rodota Trail last year, several residents of the encampment, activists and attorneys sued the county and other local agencies, arguing that the agencies should have to offer the residents of the trail a suitable alternative to living on the street before forcing them to move.

It seems that the combination of public calls for a long-term solution, the outpouring of public support and the legal agreement has created a new conversation around the Joe Rodota Trail encampment, Lauby says.

Still, it's unclear what Sonoma County can or will do for the roughly 2,000 other people experiencing homelessness throughout the county.

This week, dozens of heads of state joined thousands of attendees in Madrid to discuss the ever-grimmer reality of our heating planet at the two-week COP25 climate conference.

On Monday, U.N. Secretary-General Antonio Guterres launched the gathering with a grim message. Previous efforts to curb climate change were "utterly inadequate" and the effects of global warming could soon pass a "point of no return."

The Sonoma County chapter of the Sunrise Movement, a recently formed group intent on holding politicians accountable for inaction on climate change, organized the actions.

Guterres agrees about the root problem.