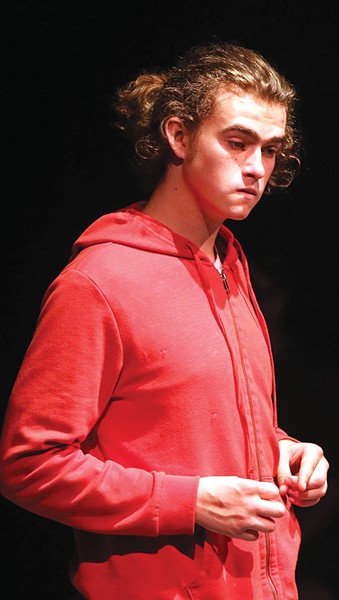 Spreckels Theatre Company opens its season with The Curious Incident of the Dog in the Night-Time. Simon Stephens' adaptation of Mark Haddon's 2003 novel about a boy with "behavioral difficulties" took England and Broadway by storm and earned multiple awards on both continents.

Christopher (Elijah Pinkham) is a 15-year-old boy with an unspecified behavioral condition, which some have read as autism or Asperger's, living with his father in Swindon, England. He discovers that a neighbor's dog has been killed and, to his father's consternation, decides to investigate. That investigation leads to another mystery that culminates in a journey of self-discovery and affirmation.

Director Elizabeth Craven gets outstanding performances from her cast. Pinkham completely inhabits the incredibly difficult lead role. David L. Yen, as Christopher's father, and Bronwen Shears as a woman in their lives are also superlative.

Excellent lighting, sound and projection design effectively transport you inside Christopher's complex mind, but they do occasionally overwhelm the story. Minor quibbles aside, there'll be ample reward for investigating this Incident on your own.

If you're only going to see one "five British women of varying ages, socio-economic statuses and body types bonding over pole dancing" play in your lifetime, might as well make it Dave Simpson's Naked Truth. A big hit in England, director Argo Thompson imports it to the North Bay for its U.S. premiere at Left Edge Theatre.

Its story of five disparate individuals brought together with the goal of putting on a charity show is hardly original and its characters are pretty stock (the shy one, the bawdy one, the snobby one, etc.), but it's well-acted and the five performers (Angela Squire, Bonnie Jean Shelton, Katie Kelley, Anabel Pimentel, Serena Elize Flores) and their instructor (Heather Danielle) have chemistry.

Once you get past the accents, there'll be two hours of laughs and tears as the ladies deal with self-image and relationship issues, sex talk, ill health and betrayal. Will all conflicts be resolved in time to put on the big charity pole dance? ★★★½