Longtime locals remember it all too well.

In February of 1986, the storm would just not stop, dropping 24 inches of rain over a 10-day period. The overflowing Russian River reached a record high water level of 49 feet, 1 inch at the Guerneville Bridge, submerging the entire town and changing lives forever.

Out of a house in Guerneville, a small-town publication called The Paper covered the flood, its damage and its aftermath. The Paper would eventually turn into the Sonoma County Independent and then to the North Bay Bohemian, which you hold in your hands. But the photos from the flood remain in our archives, just as clear, or sometimes clearer, than the many memories still shared about that wet, wet week.

To commemorate the 25th Anniversary of what's commonly known as "the Great Valentine's Day Flood of 1986"—which actually lasted much longer than Valentine's Day—we at the Bohemian have decided to dip into those archives and share some memories of the tragedy, resolve and eventual triumph that Guerneville and its surrounding areas underwent in 1986. It all started with our own curiosity upon finding the near-forgotten photo file: Who are the people in these photos? Whatever became of them? How did they persevere? Who are those kids and who did they grow up to become? Whose Volkswagen bus is that?

We never did find out who owned the bus, but after posting a handful of these photos online and asking for memories, we definitely heard from our readers. And amid the muck, the mudslides and the misery, the recurring theme told to us was that of a community coming together and working to help each other through a very rough week. That spirit is still alive in Guerneville. Some of the people in these photos are, too.

"The River Rendezvous! They had burgers, hot dogs, stuff like that," says longtime resident Jennette Evans. "There were a bunch of pinball machines and a big basement that always flooded. It was one of the last few straight bars in town." Evans was working at River Village when the storm hit and waters began rising. She left to go to Safeway for emergency supplies; when she tried to return on River Road, the water was halfway up the door on her van. "And I said, 'You know what? I'm not going back to work,'" she says. "So I called work, and they said, 'We'll have to fire you.' Yeah."

Submerged roads like this one are a vivid memory for Forestville resident Connie Smith. "I remember days and days of the rain," she says. "We were all down at Speer's Market stocking up on supplies. The rain slowed down and we thought we had dodged the bullet but didn't consider the runoff. We woke up to unpassable roads—propane tanks floating down River Road, National Guard amphibious vehicles creating wakes like ocean waves. The water had reached to the stop sign at the bottom of Champs de Elysses. It was a long four days before we could go anywhere."

"I was doing this shuttling thing," explains Fred Von Renner, "for about three days, all day long, because my tractor could go in high water where vehicles couldn't." Like fellow backhoe operator Rich Dickerson, whose backhoe is pictured here, Von Renner helped pull cars out of water, but mostly he played taxi, lifting people in his loader near Vacation Beach and taking them to safety through the raging wind and waters. "A lot of local people in this community would quite often go help others," he says, modestly. "I was raised that way." Having been born in Guerneville, Von Renner had been through floods all his life. He was five years old in the great flood of '55, just inches below 1986's record level. His parents owned Buck's Restaurant, and, he says, "We would typically move our furniture up, get hoses out as soon as the waters receded and wash everything out. We looked at it as spring cleaning. It was just a way of life on the river."

"My eldest daughter's birthday, we woke to knee-high water covering the road, and the water was still rising," says Mary Cervantes, pictured here. "My sister and I walked through the murky knee-high flood water to Safeway to get the birthday cake. We still had a birthday to celebrate." The next day, they were taken in boats to the police station, then the fire station and ultimately St. Elizabeth's church. "I think we were there two days," she says. "There wasn't a lot of room or food. They boiled eggs in a big metal coffee maker and passed out cold spam."

Cervantes made it out "literally floating like a boat" through the waters in a family Suburban, reuniting with her family at the Vets Building in Santa Rosa. "We were there for a few days before we were allowed back to see if we could salvage anything," says Cervantes, now living in Santa Rosa. "Some family photos and keepsakes were saved. Not much more than that. We had lost almost everything." 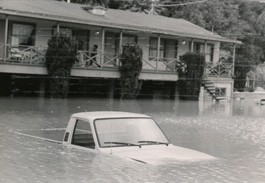 Michael Fisher's band had a show booked at the River Theatre before the flood, but it was cancelled on account of power outages. Opting for the after-show party nonetheless, "We snored in drug-addled, alcoholic dreamland while the waters rose," he writes, "and awoke the next morning to a Third World reality." (His band's name stayed on the marquee, being broadcast on nationwide news broadcasts all week.) After evacuating their house in a rowboat filled with their son, dog, cat and rabbit, Fisher and his wife took refuge with some nearby neighbors. With the water pipes broken, he hiked "on heavily wooded, steep-ass hillsides, high above the swollen river, to get to a pure stream for drinking water." From the vantage point on the hill, he witnessed the river take down numerous power lines, sparking and smoking. His only way to describe the week? "An Apocalypse Now kind of feeling."

Betamax tapes were still relevant in 1986, and the place to rent them in Guerneville was Tinker's Tapes. Living up to its name, Tinker's was an all-purpose repair shop, too; anything that was broken, "Tinker" could probably fix it, and he even wrote a home-repair column in The Paper. (In the issue after the flood, he suggested readers bring him their waterlogged appliances.) Though his wife Jane lost her battle with cancer, Tinker, aka Alex, is rumored to still be living in the area. No doubt he still remembers the poster in his store window when the flood hit—right on the front windows, for the recently released Mel Gibson movie, The River.

Peter Nortz still lives in Guerneville and remembers being with his wife in this cemetery scene like it was yesterday. "We were living on River Road across from True Value Hardware; the water came up so fast we couldn't save anything," he says. "When the big copters landed and took off, they almost blew my van over. My wife evacuated to Santa Rosa to be reunited with our daughter, I stayed at the cemetery for another two days waiting for a break to see how the house was." When he was finally able to get back down to River Road to check on their home, his heart broke. "Total devastation," he says. "Lost everything."

The "MM" on the sweatshirt here stands for "Manure Man," which is a nickname Tom Lynch won't ever live down. Why, you ask? Because in 1985, the city of Santa Rosa was found to have dumped 750 million gallons of sewage in the Russian River, which naturally floated downstream to Guerneville. Lynch decided to give it back. One night at 3am, on a tractor with a rented spreader, he dumped manure all over the streets of four blocks of downtown Santa Rosa. Amazingly, he didn't get arrested. A local hero was born.

When the flood hit the next year, Lynch was living in a tent on Mt. Jackson, above the waters. But he spent a week helping people in town, remembering the scene vividly. "There were helicopters landing in front of the Guerneville Fire Department," he says, "PT boats going up and down the river evacuating people onto the Guerneville Bridge, National Guardsmen, people all over the place. You were expecting to see Francis Ford Coppola with a microphone, throwing napalm on the hillsides."