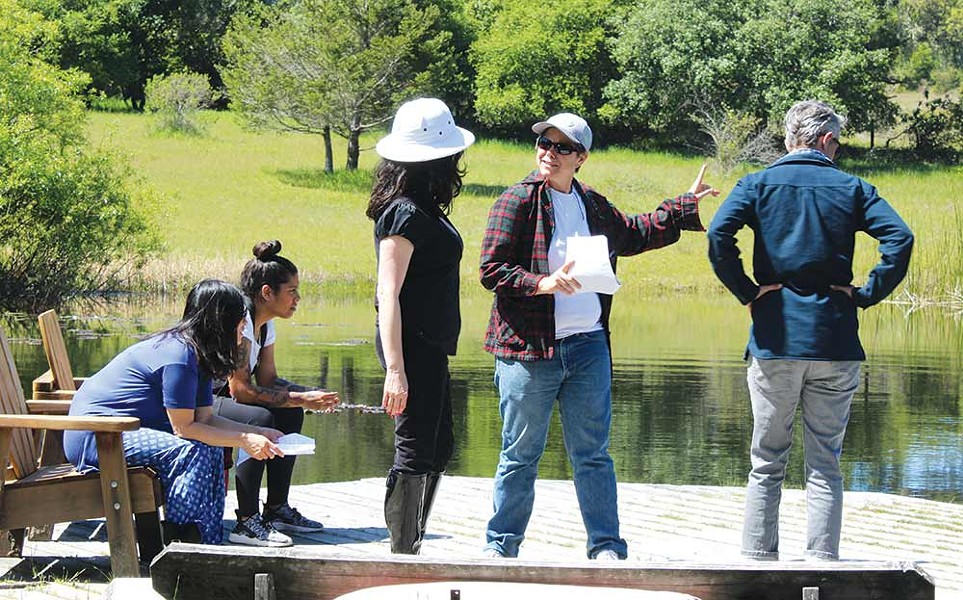 Under normal circumstances, Angie Powers would screen her first feature film, Lost in the Middle, on April 23 at Rialto Cinemas in Sebastopol, in an Occidental Arts & Ecology Center benefit event.

Obviously, things are far from normal, and the fundraising night-at-the-movies event has been postponed due to the shelter-in-place orders in effect in the North Bay.

Local audiences will have to wait to see Powers’ film, though the wait will be worth it, as Lost in the Middle—about a group of friends in their 40s—features a blend of outrageous humor and heartfelt drama.

A Sonoma County–native, Powers taught herself to tell stories while growing up on her family’s apple orchard.

“There was always stuff to do that was wildly boring,” Powers says. “So I just started telling myself stories.”

That internal storytelling transformed into story writing, and Powers earned an MFA in English and creative writing at Mills College in Oakland, studied screenwriting and now works as a corporate and creative filmmaker.

The kernel of Lost in the Middle comes from Powers’ own group of high-school friends. She describes the group as a rowdy bunch; and she says she realized the deeper importance these friendships held after a friend’s wedding several years ago.

Lost in the Middle follows a similarly rowdy group of longtime friends dealing with a very different life moment—spreading the ashes of a recently deceased group member. Tonally, the film is reminiscent of The Big Chill, only more diverse, more queer and more audacious in its comedy.

Actor and writer Guinevere Turner, best known for co-writing and co-starring in American Psycho, heads up the cast of friends. Powers shot the film in Sonoma County with a local crew back in 2017.

“It was phenomenal,” Powers says of the filming experience. “We had 300 people volunteer to be part of this, and we ended up with a core group of locals who committed essentially two full weeks of their time to help bring this together.”

Powers also notes that while the budget was miniscule, the outpouring of support from local restaurants and businesses added untold value to the production.

“It was amazing how much people were willing to give,” she says.

The film screened at select festivals last year, winning Best Feature Award at the Broad Humor Film Festival in Los Angeles. Powers is disappointed the film could not be screened this week at Rialto Cinemas, mostly because the event would benefit the OAEC, where parts of the film were shot.

“I love this county, and I know that sounds cheesy,” she says. “This is a place where people produce things, so I am confident that our county will come back, especially the artists, and I’m hoping they can lead the way in what might be a new way of doing the things we do well.”