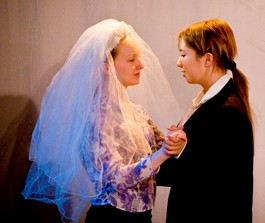 "Everybody who saw it last June kept saying, 'You can't stop now! The show must go on!'"

Director Brian Glenn Bryson, describing initial reactions to the play Prop 8 Love Stories, took the audience's advice. Unveiled last summer under the banner of Bryson's Walking Elephant Theatre Co., the play continues this year literally coast to coast, from Sebastopol to New York City. "People said Prop 8 Love Stories should, you know, travel the world," says Bryson, "that we should take it to Africa, to Ohio, to Alabama, to Alaska—because this play has the power to make a change."

Walking Elephant is a unique company, made up of young actors, writers, musicians and artists between the ages of 10 and 17. Using the same documentary theater techniques made popular with plays like The Laramie Project and the stageworks of Anna Deveare Smith, the members of Walking Elephant choose a subject of monumental significance that few people want to talk about—an "elephant in the room." They interview people who have experience with the subject and, with Bryson as co-director, fashion the interviews into performance pieces.

Prop 8 Love Stories is constructed from eight interviews with eight couples, five of them same-gender, three of them mixed-gender. The actors conducted the interviews themselves, traveling with Bryson to meet the couples. The subjects include Molly McKay, an Oakland-based attorney and civil rights lawyer, and her partner, Davina Kotulski, a clinical psychotherapist and the author of Why You Should Give a Damn About Gay Marriage; Robert and Maben Rainwater, married contractors from Sebastopol who've adopted three kids; Rabbi Jerry Danzig and wife, Joy, of Santa Rosa; Sally Miller Gearhart, the first openly lesbian educator to earn tenure at a major university; and Phyllis Lyon, the first woman to legally marry another woman (the late Del Martin), which ushered in a wave of same-sex marriages that continued until the passage of California's Proposition 8 in November 2008 ended the right of gay and lesbian couples to marry.

"The idea for this play came to life at the same moment that Obama won the election," explains Bryson. "For a few moments, there was this great sense of joy and hope, and just a few minutes later we all found out that Prop. 8 had passed too. It was so unreal. It was such a punch in the gut."

Raised in Arizona, where the schoolyard playground was an intensely homophobic place, Bryson found himself in the wake of Prop. 8 trying to imagine what it must be like for gay kids to grow up in such an environment.

"The worst thing you could call another kid was gay," he remembers. "Thinking about it, I realized that if I'd been a gay kid growing up, I probably would have been tempted to kill myself, knowing how alone I would have felt. But if a play like Prop 8 Love Stories had come to my school—a play that told real stories of real people who'd found love and happiness and acceptance—well, that would probably have saved my life."

Prop 8 Love Stories premiered at Cinnabar Theater in Petaluma, sparked a sensation and eventually ran in theaters all over the Bay Area, from the Curtain Call Theater in Guerneville to the Magic in San Francisco.

The last performances of the show were staged in the fall, but the notion of keeping it alive never left Bryson. Earlier this year, when a friend suggested the original cast try and take the show to New York, Bryson made some calls. Shortly afterward, the announcement went out: Prop 8 Love Stories would have a two-week run off-Broadway in New York this July.

"The stars really lined up on this one," Bryson says. "First this incredible script came into being, and then this incredibly talented, extremely committed cast. These kids, they really feel that they are walking down the street with Martin Luther King on this one. As the director and producer, I'm basically in the position of being the gatekeeper. Am I going to open the gate, let this continue, or am I going to move on to the next thing? I decided this was a once-in-a-lifetime opportunity, and so we're keeping the gate open, to see how far we can take this.

"Of course, like most things," he adds, "first you decide to do it—and then you have to pay for it."

The New York run, to take place at the New York Theatre Workshop, will cost upwards of $25,000, only half of which has been raised so far. With opening night just over six weeks away, the company of 16 actors is hard at work raising the remaining funds, securing a marketing team and preparing to take the show across the United States.

"Since there are a lot of people kicking themselves because they missed the opportunity to see the show the last time we did it," says Bryson, "we decided to stage a couple of performances right here in Sonoma County. If we can pack the theaters, we might end up with enough to pay the bills in New York. At the same time, these two shows at home will be a great warm-up for the cast, just before we all climb onto the plane."

In addition to drawing those who want to support the off-Broadway shows, Bryson hopes that people will bring friends and family who are still on the fence about the whole same-sex-marriage issue.

"One of the greatest experiences of my life was when a woman pulled up next to me in a parking lot and said, 'I just want to thank you. I was a 'Yes on 8' person, and my 11-year-old daughter and I saw your play together, and on the way home we started talking about it and we both started crying. I had to pull the car over, and I basically told her that I'd been wrong. That play of yours helped me change my mind.'

"How amazing is that!" Bryson says. "This play really does change people's hearts. It changes their minds. And I believe it can change the world."