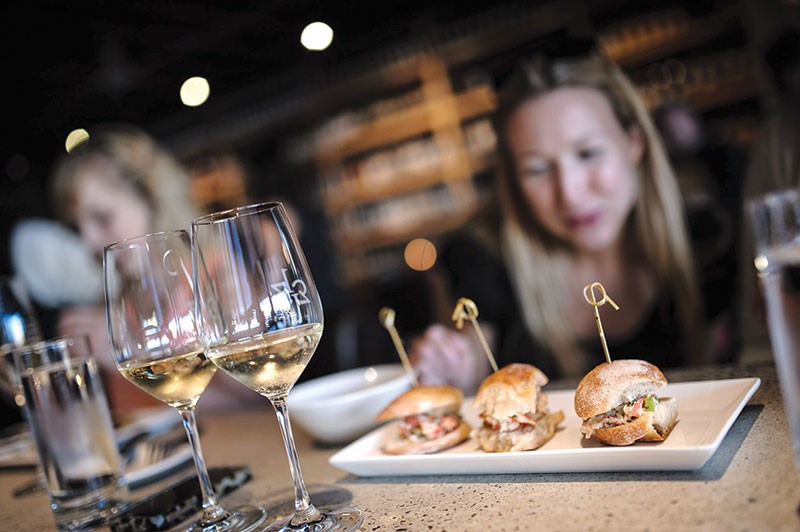 Napa's 1313 Main is a stunning wine bar, and after two years, it's taking the next logical step into the culinary world with the opening of Lulu's Kitchen. While 1313 Main sets a high bar with its wine selection and service, the food is meant to be an accompaniment, not the main focus, says proprietor Al Jabarin.

"We cook for the wine," Jabarin explained last month at a media preview tasting, with a prix fixe menu served family-style to tables of four. Noting that Napa has so many excellent dining establishments, Jabarin added that it would be nearly impossible to keep the wine bar's standards at a high level while simultaneously trying to outperform every restaurant in the area. Lulu's dishes will transition in and out with the seasons and focus heavily on local farms; the restaurant's purveyors are noted on the ever-changing menu.

We started with a lobster roll, which proved to be the top dish of the night. (It was such a big hit at the BottleRock festival, says Jabarin, that it will be the only exception to the menu's "farm to fork" concept.) The lobster was fresh and not overpowered by its slaw-like salad, and the roll was light and sweet. The next dish, a raw vegetable salad ($8), visually beautiful, did not shine as brightly with eyes closed. Impossibly thin cross sections of radishes, carrots and other root vegetables were delicious at first glance, but needed more seasoning on first bite.

Crispy Belgian-style fries with poutine and bacon tasted fine, a concession to comfort food slightly out of place in such a refined setting as 1313 Main. Almost in overcorrection, oeufs en meurette, with quail eggs and pancetta, ($9) proved too dainty to support the thick, salty slices of pancetta. Like the vegetable salad, it looked beautiful, but thinner, less salty slices of pancetta could easily complement the rest of the dish.

Abita-braised pork belly with peaches and shoestring taro ($11) was served as a "main entrée" in this parade of small bites. This was the burst of flavor I was longing for. Sliced one-quarter inch in thickness and served with grilled peaches and a blueberry reduction, the pork belly melted in my mouth and left me wanting more. Had my fellow diners been any slower, I would have added at least a hundred more calories to my meal.

Dessert consisted of funnel cake strings with a trio of sauces ($8). Funnel cake is best enjoyed en masse; its very name implies dumping the crispy, fried, sugary concoction down one's gullet, and part of the gratification includes a burnt mouth and soiled shirt. Again, this type of dish seemed out of place at such a fine wine bar, and perhaps the bananas Foster ($8) would be a more appropriate option for formal diners.

Attractive items on Lulu's menu that went untasted include the hanging tender with succotash and pomegranate gastrique ($14) and the heirloom tomato salad with mozzarella and crispy avocado ($12).

Jabarin says Lulu's is open to change. "We're not dogmatic," he says. "It's food and wine, for God's sake. It should be fun." That's the kind of attitude that will keep things fresh and inviting as the kitchen sets out on its way.