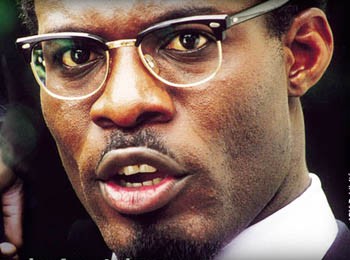 IT'S WORTH celebrating that the film Lumumba ever got made--no small feat for a story of an African hero, or for a sweeping period film shot on a low budget. The movie's very existence is so surprising, in fact, that it's worth overlooking such faults as the starchy characterization of Patrice Lumumba (played by Eriq Ebouaney, forceful yet likable despite the script).

Director Raoul Peck, a documentary filmmaker from Haiti, is in the martyr-memorializing business: his Lumumba is a hard-working cipher who addresses the audience as if it were a public meeting. We're not even spared the time-honored scene where his wife tells Lumumba to come to bed because he's been up working half the night.

Lumumba, murdered in 1961, was the first prime minister of the Democratic Republic of the Congo. As a member of the small Batatele nation, Lumumba understood how tribal conflict threatened an independent Congo; as a European-educated citizen of the Belgian Congo, he understood how much stock the West put into parliamentary procedure.

The forces that wiped out Lumumba included the usual tribal rivalries, inflamed by Europe's carving up of Africa into plantation-colonies that forced ancient enemies together. Lumumba was also the victim of the larger rivalries between the USSR and the United States; his death was a Cold War crime that the film Lumumba is careful to pin on John F. Kennedy and his CIA.

It's the movie's scope that recommends it. Peck's film, done in Mozambique and Zimbabwe, gives a solid outline of the events around independence. The Belgian government planned a slow pullout, which only precipitated the activities of Lumumba and his fellow politicians. However, major hurdles followed the Belgian withdrawal: the mutiny of the national army, which attacked and raped white settlers (even the nuns weren't spared), and the secession of the mineral-rich Katanga province.

Peck frames this story in an unfortunate way: it's narrated by Lumumba after his death, while his body is being dismembered and buried in an unmarked location. Heavy dread hangs over the picture, and Lumumba's stoic words hardly forestall it. Narration is so often a failure in the movies that its use ought to be discouraged from film schools on up.

Lumumba is best as an introduction to a figure whose memory should be honored. The film is less worthwhile as yet another lesson in how integrity leads to death.

It would have been hard to make the ending here even implicitly happy. Lumumba was succeeded by Joseph Mobuto (Alex Descas), later known as Mobutu Sese Seko, a thief of such rapacity that he could be compared only to the Congo's murderous founder, the stupendously greedy King Leopold III. And, of course, the tragedy continues even today, with the region still engulfed in political upheaval and war.

But would it have been possible to show, somehow, that the spirit that will save Africa is living in the continent's people--rather than buried in a shallow grave?

From the August 9-15, 2001 issue of the Northern California Bohemian.