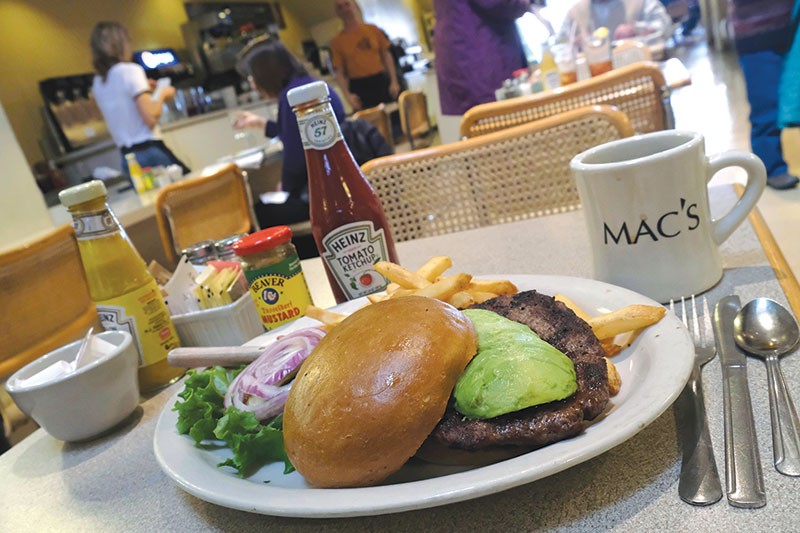 The turkey club sandwich is one of the world's greatest, simplest sandwich inventions, but it's greatness is only manifested if one key, critical condition is honored—fresh-roasted turkey only, please, and make sure the bacon is extra crispy.

Don't worry if it's too dry for most—I like it dry, just like Elwood Blues. I'll apply the mayonnaise myself, thanks—you just make sure the cole slaw is fresh and light and not too creamy, and that the attendant pickle spear is crisp and cool.

That sandwich, and everything else about the place, scores big at the go-to downtown breakfast-and-lunch joint, Mac's Kosher Style Deli & Cafe, the Fourth Street institution in Santa Rosa whose legendary and beloved owner, Iraj Soltani, died in January, to much sadness and remembrances from customers.

The deli-cafe has been in business since 1952 and is open every day but Sunday, with a warm and inviting bustle that never gets tired or nerve-jangling, even when you have to wait for a table—and you never have to wait too long. There's always a pile of reading material.

The menu is long but not ridiculous in its reach. Mac's is not a standard-issue diner, but an authentic old-timey deli, so there are no obligatory attempts at globe-trotting dishes for all palates or high-end offerings like big fancy chunks of steak for $26 and your choice of a potato or fries. There are no fragrant pasta dishes or gyros—just a big list of sandwiches, a heaping of standard salads, and offerings that run the gamut from simple burgers to a mother of all kosher-style sandies, corned beef, tongue, chopped chicken liver and onions. You want an avocado on that burger? Of course you can get it.

I like to go to Mac's toward the end of the lunch rush when there's still a bustle but usually not a wait, grab a booth if one's available and fly solo in style, slumped down in the booth with the paper and a cuppa coffee. I'll scan the menu a while and then order one of five things, regardless of how long the scanning goes on. For me, it begins and ends at Mac's with a burger, a patty melt, a pastrami sandwich, the turkey club or some bacon and eggs. The verdict: solid; awesome; perfect; decadent; no frills, but it comes with toast and home fries.

The other day I ordered that turkey club with a side of cole slaw, a huge heaping mound of the stuff. The turkey is indeed fresh-roasted, and the brown and leathery wings and legs wind up in a big bowl in the front counter.

I sat at the last seat at the counter elbow-to-elbow with other diners, with a view straight into the kitchen, and we massed diners of the simple and the solid fare peered at headlines in the Chronicle or Press Democrat, or made strange grunting sounds hovered over the latest Bohemian.

The sandwich arrived—but weirdly, it was only half a sandwich. The waitress promised, with apologies, that the other half was coming right up. Another waitress filled my water glass. Another asked how I was doing today. Pretty good. The second half of the sandwich arrived and I almost cracked a tooth on the extra-crisp bacon—just the way I like it.