The brew that might make St. Helena more famous than it already is 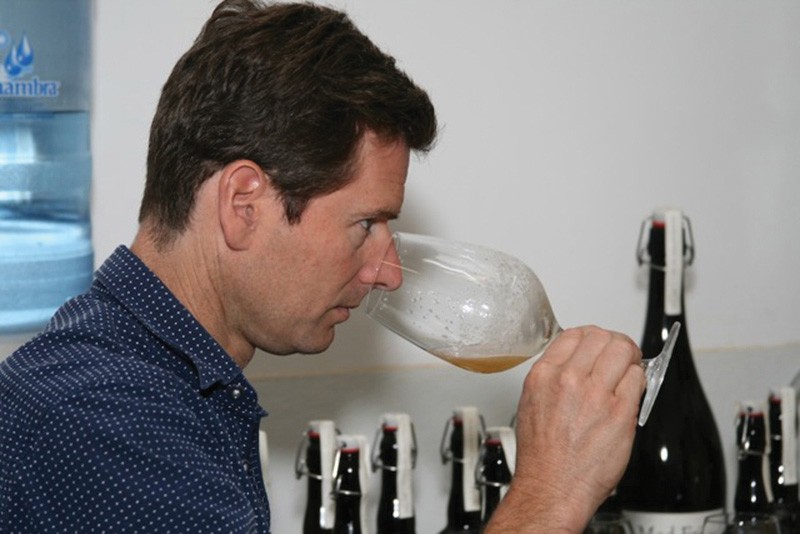 For Whitney Fisher and Nile Zacherle, beer and wine go together like love and marriage. Husband and wife since 2007, and the parents of two young children named Madeline and Fritz, they work full-time in the Napa Valley wine industry. She's at Fisher Vineyards, her family's winery; he's at Montagna Napa Valley.

"I grew up in Santa Rosa and got into beer through wine," Fisher says. "With Nile, it was the other way. From the time he was a teenager he made beer."

They make small batches of craft beers using locally sourced water and grain. They also make a "weir"—a wine and beer mix—that they call "the Fox and the Grapes," which combines the fruity flavors of a California rosé with the spiciness of a European ale. Each 22-ounce bottle ($25) comes with a porcelain swing top.

Fisher and Zacherle borrowed the names for their brews from Aesop's Fables, including the Peacock and the Crane, the Lion and the Mouse, and the Fool and the Cart. All of the labels have delightful sketches by the 17th-century English artist Francis Barlow, who illustrated the ancient Greek fables in 1666. The labels offer brief stories with moral lessons, and they provide information about the alcohol content, the kind of wine barrel in which the beer was fermented and the precise sources for the malt, barley, hops, corn and water.

The story on the label for the Lion and the Mouse, an ale made with St. Helena water and Clear Lake hops, and aged in a French oak barrel, describes a mouse that frees the king of beasts from a hunter's trap. The moral reads, "All creatures are capable of greatness, both big and small."

By starting small and by ignoring the brewing methods of big beer makers, the duo have shown that there's a place for Mad Fritz in the heart of wine country, and maybe beyond.

Zacherle and Fisher are transparent about their product, and each batch is unique. For those who want the same exact taste time after time, don't bother. The variations on the theme are almost endless, depending on chemistry and ingenuity.

On the Mad Fritz website, there's lots of "nitty-gritty," as Zacherle calls it, about the fermentation process, along with guidelines such as, "We suggest you serve our beers in wine glasses or bowled glassware."

You can make an appointment to visit Mad Fritz and listen to the master brewer himself talk about the beer that might become more famous than St. Helena's already famous wine. As Zacherle likes to say, "The path to good wine is littered with beer bottles."

"We're leading the charge," Zacherle says. "No one in Napa or, for that matter, in much of the U.S. is making beers as we are, using single variety barleys, and stating the origin of the ingredients—the water and the hops—and also aging in barrels, and bottling unfiltered."

For now, the beers are available at the brewery and select restaurants in Napa including Auberge du Soleil, the Rutherford Grill and Bounty Hunter.