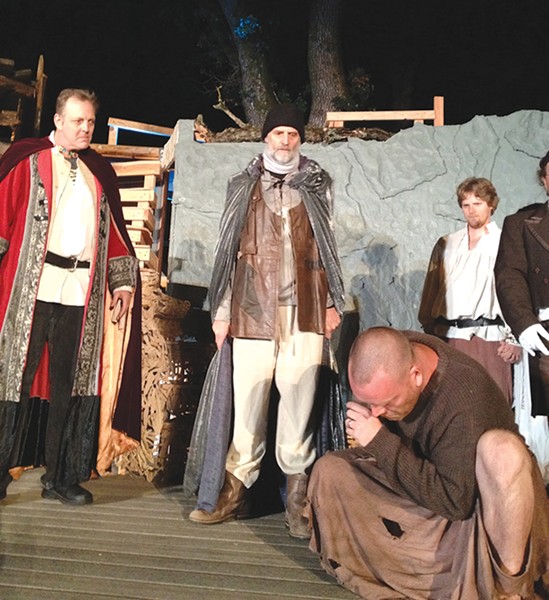 'Torture! That's the best word for it. Torture!"

"And if torture is what Prospero is feeling, then that's exactly what I'm feeling," Craven says with a gentle laugh. "This is a very tough role, Prospero. It's a real challenge, and every rehearsal brings huge new discoveries. It's pretty tough."

Ah, the life of a Shakespearean actor.

The Tempest—with Craven in the lead, Sheri Lee Miller directing and a crack team of local all-stars filling out the colorful cast—opens a three-week run this weekend at Sebastopol's Ives Park, part of Main Stage West's Sebastopol Shakespeare Festival. Of course, along with its complexity and depth, and despite the sufferings of its central character, The Tempest is also one of Shakespeare's sweetest, funniest, most magical, most emotionally satisfying plays.

Once the Duke of Milan, the embittered magician Prospero has spent years on a mysterious island. Marooned long ago by traitors (Peter Downey, Anthony Abate), Prospero has raised a daughter (Rachel Quintana), all while mastering the art of magic, preparing for the day he might exact revenge on those who put him there. When those enemies, traveling across the sea, finally do sail within sight of his island, Prospero summons the tempest of the play's title to shipwreck them all—and what begins as Prospero's revenge turns into something different, as the old man discovers a long lost sense of hope, humanity and forgiveness.

And then there's some stuff about a drunken butler (Eric Thompson), a troubled monster named Caliban (Keith Baker) and the beautiful spirit Ariel (Danielle Cain), who is smarter than everyone and does awesome magic tricks. Beneath it all, says Craven, the play is about growing old, but it's also about growing up and growing wise.

"Prospero," Craven explains, "has come to a place where he's wrestling with all kinds of different feelings, struggling with his own sense of wounded humanity. He knows he couldn't survive without forcing the two residents of the island, Ariel and Caliban, to work for him, and that eats at him, it bothers him. And at the same time, he has a daughter to bring up, and the fear that he might die and leave her alone on this island—well, there's the torture again."

Though Craven—long considered one of the best and most dependable actors in Sonoma County—has played many parts over the years, he's only tackled Shakespeare twice. He played King Leontes in The Winter's Tale at Cinnabar and the melancholy Jacques in As You Like It at the Sebastopol Shakespeare Festival. But he's never faced a Shakespearean character as complex and rich as Prospero. It's largely through the guidance of director Miller, Craven says—with whom he's worked extra hard to dig beneath the surface—that he's come to understand Prospero, whom he says he never really thought about playing until asked.

"I'm part of a company," he says simply, "and they decided to do this play, and I said yes. I never dreamed of playing this part, like some actors do, but now that I'm doing it . . . well, it's like I said."

Yes, of course—torture. But, in this case, it's the very best kind of torture. And just like Prospero, Craven knows that it is never too late to learn new things.

"Every day, at every rehearsal," Craven says, "I go in with a blank slate, ready to work with Sheri, ready to engage with the cast, ready to learn."