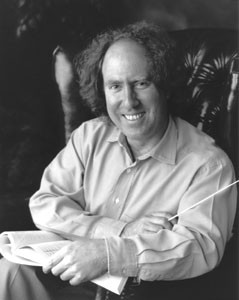 Opus One: Santa Rosa Symphony conductor Jeffrey Kahane is collaborating with local composers to bring new works to the fore.

As Good as Gould

A Silicon Valley tycoon is putting her wealth behind a unique project that will unite modern classical composers and small regional symphonies--and that's music to the ears of North Bay concertgoers.

Venture capitalist and amateur violinist Kathryn Gould, a founding partner of Foundation Capital and recently featured on Forbes magazine's "Midas List" of Tech's Best Venture Investors, has invested $375,000 of her own money to commission nine new orchestral works over the next three years.

The ambitious project, dubbed Magnum Opus, was created in collaboration with conductors Jeffrey Kahane of the Santa Rosa Symphony, Alasdair Neale of the Marin Symphony, and Michael Morgan of the Oakland East Bay Symphony. The program is operated under the aegis of Meet the Composer, an innovative New York-based program that since 1974 has paired aspiring composers with local symphonies as a means of expanding the repertoire of 20th- and 21st-century music.

The first three works will be created by composers Ingram Marshall, Kenji Bunch, and Kevin Puts. Each of the orchestras will premiere a new Magnum Opus work every season and give repeat performances to other works commissioned through Magnum Opus within a five-year time span. That schedule will give the composers the rare opportunity to make adjustments to their work and grant Bay Area audiences a rare glimpse inside the creative process. In addition, one-week composer residencies will be organized around each of the premieres.

"I have often felt alienated from the music of my time and I wanted to do something about it," says Gould, 53, who has been frustrated in the past by what she has called the harshness or dullness of so many modern classical compositions. "Commissioning new works through Magnum Opus has proven that I can be involved in a way I had not thought possible. It will also allow me to light the way for other individuals to support new music, which we clearly need. On many levels, Magnum Opus has been a deeply satisfying experience--and I still have the music and concerts to look forward to!"

To the casual observer, it may not be immediately apparent just how special this project is: Magnum Opus is the first time that compositions of this scope have been created for symphonies at this level. Usually a composer of Marshall's magnitude (he is probably best known for 1982's haunting Fog Tropes, recorded by the Kronos Quartet and others) accepts commissions only from the likes of the Los Angeles Philharmonic or other large metropolitan organizations.

All this newfound generosity comes at a time when the recession has dramatically trimmed donations to arts organizations. Barely a day goes by without news of another symphony bankruptcy or closure. The San Jose Symphony, once the oldest west of the Mississippi, closed its doors late last year, and the Santa Rosa Symphony's plan to build a new home at the Green Center on the Sonoma State University campus has stalled due to funding woes.

But Gould sees her largesse as part of a larger cultural framework. "We talk a lot in Silicon Valley about being a center of creativity," she recently told the San Jose Mercury News, "and we compare ourselves to Florence in the Renaissance. And yet every great civilization has an artistic legacy. We don't yet have one coming out of Silicon Valley."

Gould decided to do something about that situation when she turned 50 a few years ago. She discussed her hopes with Paul Brest of the William and Flora Hewlett Foundation, a viola player who performs with Gould in a string quartet. Brest put Gould in contact with Meet the Composer, whose president, Heather Hitchens, brought the three Bay Area symphonies on board.

For her part, Hitchens hopes that Gould's actions will serve as a model for aspiring patrons of the arts. "A groundswell of support from individuals who love music must be fostered," she says.

In April 2004, the Santa Rosa Symphony will premiere the new work by Bunch, a New York-based classical violinist who also plays bluegrass fiddle. The other premieres have yet to be scheduled.