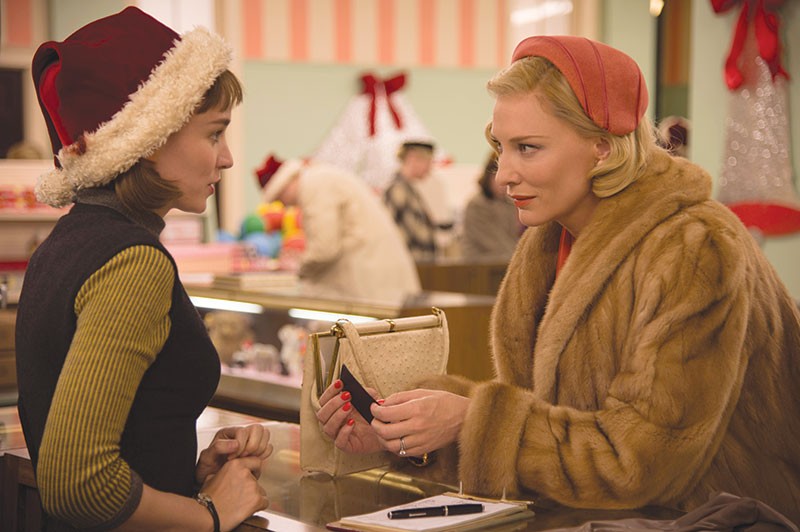 The title of Patricia Highsmith's 1952 novel The Price of Salt contains a dead idiom—the price of salt was something people supposedly chatted about when they weren't talking seriously. Girl talk, as they once said.

The adaptation of the book by Todd Haynes, his first feature film in eight years, is called Carol. This single-gender romance, which almost hypnotizes, emulates the 1950s Hollywood melodrama of throbbing hearts, stiff jaws and immaculate wardrobes. But it's missing something. Salt?

Carol (Cate Blanchett) is a fur-coated, upper-class housewife from New Jersey who meets the woman who will change her life across the counter at Frankenberg's department store. Therese (Rooney Mara) is a lonely, shy and self-effacing shopgirl with a taste for photography. The two have a lunch that leads to deeper things.

One of the problems facing this liaison is that Carol isn't quite single—she's in the middle of divorce and custody hearings with her husband, Harge (Kyle Chandler). His name is short for Hargess, but it also works as a combination of "harsh" and "large." Harge's own side of the triangle doesn't add tension; he's a pushy, sullen WASP, a life-ruiner who wants to grab Carol's daughter, Rindy.

When the ladies makes a decision to flee for a time—to just get in the car and drive—it precipitates both the slow-simmering affair and the crisis that endangers it. Blanchett, cast in a mad-housewife role that Joan Crawford might have played—is so scarlet-lipped, so full of force and stride, that she breaks the frame. It's hard to believe this intimidating lady as a woman who can be shamed. Mara is her opposite, meek and mousey.

You want to treat a movie this well-intentioned with respect, and love it for how thick it is with romantic cigarette smoke and simmering flirtation. It has moments that get you in the throat, as when, after a troubled date, Therese weeps to herself on the train, doubled by her reflection on the dark window. But it's a cold fish of a film, beautiful but taxing.