Mardi Gras at the Mystic

Rhythmtown-Jive bring the spirit of Carnival to Petaluma 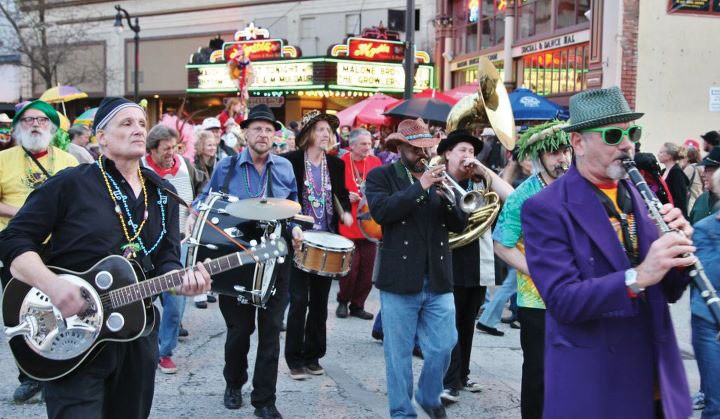 "If you can't get to New Orleans for Mardi Gras, we'll celebrate it here," says Tim Eschliman, bandleader and self-described instigator of Rhythmtown-Jive.

The band headlines a Fat Tuesday show at Petaluma's Mystic Theater on March 4. Festivities begin at 5:45pm with a street parade, including drummers and horn players marching "up and down alleys," he says, during an interview at his Petaluma home. True to tradition, revelers are invited to wear disguises, bring instruments and join in. Beads will be thrown and handkerchiefs waved.

The parade continues onto the Mystic Theater's dance floor, specially decorated for this event, where there'll be a Mardi Gras costume contest, drink specials and Louisiana-style food, such as gumbo and jambalaya. Andre Thierry & Zydeco Magic open at 7pm, followed by Rhythmtown-Jive at 8:30pm.

He began these Mardi Gras happenings in 1992, at a friend's San Francisco restaurant, later dubbing them Mambofests after the song "Mardi Gras Mambo."

"That was so much fun, we decided to do it every year," he says. Rhythmtown-Jive has continued that tradition ever since, in Santa Rosa, Mill Valley (where they're also performing this show on Feb. 28 at Sweetwater Music Hall) and Petaluma.

Eschliman picked up on Motown and soul music in junior high school while growing up in Ohio. His long career has included working with Etta James at her Northern California appearances (including a show at a small Albany club with Leo Nocentelli) and traveling with her to Ashland for a few shows. "Some singers just pull it out of you. The whole room would just get sucked into a vortex, like a hurricane," Eschliman says.

Rhythmtown-Jive has three albums, including one containing six songs with Chuck Berry's former piano man, Johnnie Johnson. Eschliman has also backed up Bo Diddley (who played a cigar-box guitar) and Big Joe Turner with Lee Allen, in San Francisco venues. He plays with Commander Cody at times and, along with Dan Hicks and others, cofounded the Christmas Jug Band, once described as "a momentary lapse of sanity."

Mardi Gras has reverberated through history since Medieval Europe. It's a time for cutting loose before Lent's severities.