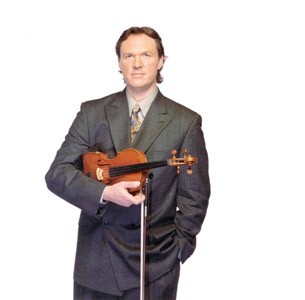 Class Act: Mark O'Connor, ever fiddle-ready, is at the top of his game.

Violin virtuoso O'Connor has the world on a string

Not many musicians have to worry about pulling off two New York premieres in a single night, but then Mark O'Connor isn't just any musician. On Feb. 4, O'Connor found himself in the awkward, if enviable, position of being in two places at once--figuratively speaking. The Grammy-winning composer, violinist, and fiddler had two world premiere concerts taking place just moments apart in New York City.

Neither premiere performance could be rescheduled, so O'Connor decided to skip the Folk Mass debut, reasoning that it was out of his hands, and head for Lincoln Center.

The episode is just the latest chapter in a career filled with Herculean feats. After all, while O'Connor--who brings his acclaimed jazz trio to Santa Rosa this week--was preparing to launch his spring tour, he also saw his contribution to the Gods and Generals soundtrack go on sale, and he was the featured violin soloist at the official NYC memorial service for the fallen Columbia astronauts.

And In Full Swing, with guests Marsalis and Monheit, debuted on Billboard's Traditional Jazz Chart at No. 5, garnering rave reviews. "That's a rhythm section like no other," says O'Connor during a phone interview. "This trio really created some kind of groove and depth that I've never heard before."

Little wonder. Burr played bass with Grappelli for 12 years; Vignola, an accomplished player, can push O'Connor to new heights; and O'Connor was chief guitarist with Grappelli in 1979.

"Stephan really put a human voice on jazz, and that was to my liking," O'Connor explains. "I was moved by his personal musical experiences that shone through his jazz, especially his gypsy, classical, and even tango influences. I found him very eclectic, and my approach to jazz was destined to be eclectic, because of my own experiences and training."

As for Marsalis, O'Connor had met the jazz trumpeter in the mid '90s and they "became pretty fast friends." In 1997 Marsalis performed a duet on O'Connor's Liberty album and the fiddler returned the favor by performing an elegant folk ballad on Marsalis' 1999 release Reeltime (Sony Classical).

In Full Swing is their first collaboration in a swing-jazz setting, however. "It just worked like magic, really," O'Connor marvels. "When you think about the combination of trumpet and violin--it could only have been born out of friendship and the desire to make it happen. Wynton's unbelievable ability to meld into the situation was instrumental in having this come off."

The album is one more notch in O'Connor's spectacular 30-year career. In that time, he has composed music that cellist Yo-Yo Ma has recorded and Twyla Tharp's troupe has danced to, played at the White House and the Olympics, won two Grammys, and played on more than 450 albums with everyone from Bob Dylan to Dolly Parton.

For more than a decade, O'Connor also has worked as a performer and composer in the classical arena. His collaborations with Ma and bassist Edgar Meyer resulted in two bestselling CDs: Appalachian Waltz and the Grammy-winning Appalachian Journey. In 2001, The American Seasons led the New York Times to applaud O'Connor's "unstoppable melodic gift."

And what satisfaction does O'Connor get from these diverse projects? "First and foremost, I've really concentrated on developing a style of playing the violin from an American school of thought, and it's that approach that allows me to traverse genres and to be at home in different settings--it all sounds like Mark O'Connor violin music.

"It's still unique and new to people, but it's something I've been working on for 30 years."