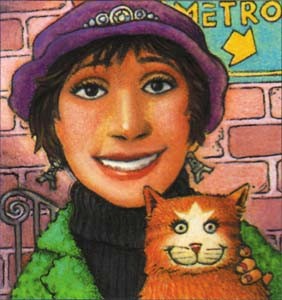 A Tale to Tell: Marsha Diane Arnold has found herself writing in rhyme recently.

Marsha Diane Arnold understands stories. A skilled inventor, Arnold has created such charming children's picture books as Heart of a Tiger and The Pumpkin Runner, along with popular easy-readers like The Tail of Little Skunk and Quick, Quack, Quick! Her stories are astonishingly rich, infused with humor and fine emotional detail.

The Chicken Salad Club is about a little boy's sweet-hearted attempt to find a suitable companion for his 100-year-old great-grandfather. The Bravest of Us All is the tale of a nearly fearless Midwestern girl with a secret phobia regarding storm cellars. Last year's Metro Cat is the story of a spoiled French kitty who becomes a dancing sensation in the Paris subways. Arnold, in other words, is a born storyteller. It's her job, and she's good at it.

On a nonprofessional basis--when it's just you and her in a room together, sharing a cup of tea--Arnold is still a born storyteller. She talks in stories like it's a native language. If you ask her a question, the answer is likely to be a story. Some of these stories are short--a sentence or two in length but jam-packed with drama--while others are so long and full and rich they deserve to become books of their own. She appears to be unaware when she's doing it, and the stories keep spilling out as effortless and easy as water from a tap.

There's the one about her grandmother's house in rural Kansas.

"We were an extended family of Swiss-German-Menonite farmers," Arnold explains, sitting in the studio of her Sebastopol home. "My grandmother wouldn't have stood for it had we not had dinner together as a family every single Sunday, so we all showed up every week. I spent a lot of time there, and I loved it. I learned a lot from my grandmother."

There's another one, about her daughter's semisuccessful attempt to trade her little brother for a coveted Barbie coloring book. That story did become a book, the silly-funny Edward G. and the Beautiful Pink Hairbow.

Then there's the story of how Arnold quit weaving stories altogether after being diagnosed with breast cancer and her surprise discovery--once she began writing again--that her once-familiar storyteller's voice had undergone an unexpected transformation.

"I was diagnosed in 1997," she says, "and it just stopped me in my tracks. I had to rethink what my priorities were. Getting healthy, staying healthy, had to be number one--my health is still number one--so for a while, I didn't write at all. I just focused on becoming healthy."

She pauses a few seconds, and in that short moment she seems to shrink in stature, physically encompassing all the struggle and fear and fight of a women who's spent months and years locked in a contest with her own mortality. The moment is broken when Arnold suddenly smiles, practically twinkling with amusement as she reveals the next piece of the story.

The fruits of that unexpected evolution will be unveiled next year, when her next book, Prancing Dancing Lilly, is published. It's the story of a globe-trotting cow who sends letters to her old herd back home. The letters are all written in rhyme.

"My next one after that," she grins, "is called Roar of a Snore. That one is all in rhyme, and the one I'm working on now is in rhyme. It's actually quite hard and frustrating sometimes. To write a story in rhyme is difficult because any little thing you change ends up changing all these other things.

Growing up in the Sunflower State among all those Swiss-German-Mennonites for whom English was a mystery--"We really weren't all that literate," Arnold laughs--she somehow grew up enamored of languages and words. In college, she majored in English literature, studying Shakespeare and Chaucer.

"I loved that language, I loved the way those words sounded," she recalls. "I love the history of individual words, how they came to be and what they meant when they first were spoken."

The mother of two children--both have moved away to college--Arnold has used what spare time she has now to branch out a bit. Last year she launched her first official website (www.marshadianearnold.com), which has attracted a pile of e-mails from young fans around the country. She's also been traveling more, visiting schools to meet those fans, teach workshops, tell stories, and answer questions.

It seems that her fans have a lot of questions about her books and how she chooses the illustrators who bring the words to colorful life. According to Arnold, many people are surprised to learn the truth about picture books: Authors seldom have anything to do with the pictures that go with them, neither choosing nor even approving of the illustrations.

"Editors," she notes with a smile, "like to keep us apart."

That said, Arnold admits she's extremely pleased with the illustrators she's been assigned, an assortment of artists she fondly refers to as "an illustrious group" (was that a pun?) who include Jamichael Henterly, Julie Downing, and Jack E. Davis. The only illustrator she's been teemed with twice is Brad Sneed, whose beautiful work graces The Bravest of Us All and The Pumpkin Runner.

"I've been lucky," Arnold says. "I have no complaints."

Arnold has been writing more lately, in rhyme and out. One project that is especially close to her heart is a picture book with the intriguing title of Slobberchops. "When I first got sick," explains Arnold, "I decided that my kids needed a dog--or maybe it was that I needed them to have a dog--in case I didn't make it. My son chose the breed, and he chose a boxer." The dog, who was named Ali, became Arnold's close companion all during her treatment. The bond between them was remarkable, she says, still visibly grieving Ali's death last summer following their close five-year relationship.

"Ali had an enlarged heart," she says. "And that's how he was with me--his heart was huge. Boxers drool a lot. They're a mess. But I just loved Ali. He provided a lot of fun for me." When Ali became critically ill, Arnold responded in the only way she knew how: she wrote a book, a tall tale about a big-hearted boxer. "I wrote that book more quickly than any other book I've written--I did it in about three weeks." She's currently working on a revision of the story, and hopes to see it in print within the next couple of years.

As a person who loves and understands stories, who revels in the rhythm and structure and power of stories, it is not surprising that Arnold has developed a few tricks to assist in transforming her own stories into written books.

Her favorite trick: She reads out loud as she writes.

"When you read a book out loud," she says, "you get a really good idea how good that writer is--or not. When you are writing a children's book, one of the things you have to do is to read it in your own voice. When I'm working, I'm reading out loud constantly, over and over, as I sit at the computer writing a story.

"Stories are wonderful to look at and read," she says, "but they truly come to life when they are given a voice."