What the hell's going on in 'The Lone Ranger'? 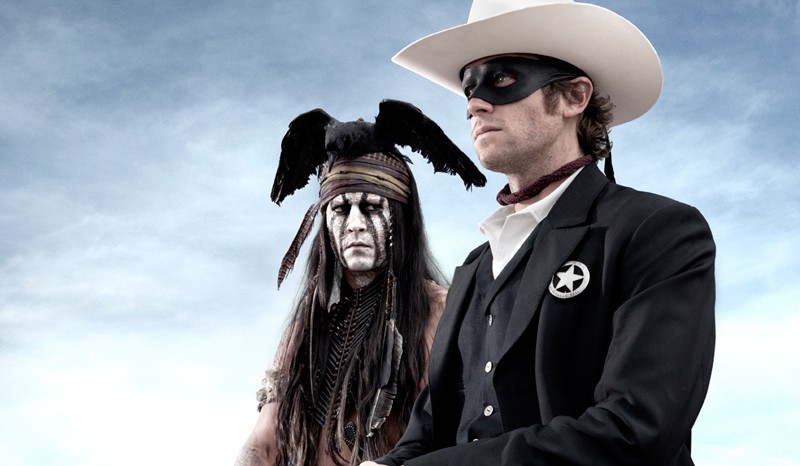 Interesting as a train wreck, Gore Verbinski's Lone Ranger (produced by Jerry Bruckheimer) may still end up having its defenders, thanks to its flagrant apologies for itself, which make it a sort of zillion-dollar remake of Dead Man (and, since you'll be taking the kids, no marijuana first to make the stupid-white-man castigation look profound).

The studio would love to have "Don't take off the mask" become the tagline of summer 2013, but it's odd how the movie unmasks its own fear of the audience and loathing of the myths it pollutes. The Lone Ranger's framing device has a jaded, bored little entertainment consumer of 1933 hearing the unlikely story from Johnny Depp's even more unlikely Tonto.

But this movie wants to be so many hundreds of other movies (there's a pocket watch borrowed from For a Few Dollars More turning up as a symbol of the white's man's greed), and it's therefore in a shaky position to teach us "thou shalt not covet." It wants to be Once Upon a Time in the West and Pirates of the Caribbean, and had a good chance of being The Mask of Zorro, but there's little evidence of the love, care and spirit shown in that revamp.

Sherman Alexie aside, the Lone Ranger is only remembered by wheezing old senior citizens—why disinter him just to (literally) drag him through the shit? Our silly, prissy hero (Armie Hammer) and his wiser Comanche tutor Tonto get caught in a three-way struggle between the scarfaced ogre Butch Cadvendish (William Fichtner) and a pack of scheming railroaders led by Tom Wilkinson.

Ruth Wilson of Jane Eyre has the unenviable role of the Lone Ranger's beard. Some relief is provided by Helena Bonham Carter as a henna-haired madam with an ivory leg (she seems to have snuck in from a Flashman novel), but the good joke about dangerous rabbits would be funnier in a movie that wasn't completely about cannibalism.

'The Lone Ranger' is in wide release.